Fun Fact of the day: Mike Anderson is really good at rebounding

Anderson was among the Pac-12's best at rebounding the basketball, despite his 6'4 height.

Share All sharing options for: Fun Fact of the day: Mike Anderson is really good at rebounding

When Mike Anderson transferred to Washington from Moberly Area CC last offseason, there was little hype around him. He was seen as a good depth piece on the wing who could contribute some minutes but likely wouldn't be a major contributor. He was pressed into a lot more minutes than expected when the frontcourt lost all of its depth following Jernard Jarreau's ACL tear and Desmond Simmons' own knee surgery.

At 6'4, it is fair to say that Anderson was undersized to be manning the power forward position for the Huskies. It didn't matter, he rivaled Desmond Simmons and Isaiah Thomas. watch this again and again but don't get sucked into IT highlights like I did, come back to read the rest of this. Actually, do. He's awesome and this article will be here when you get back.

Anderson averaged a double-double at Moberly, with 17 points and 10 rebounds while shooting 42 percent from deep. Only one of those skills translated to Washington, and it is typically the most translatable skill from level to level: rebounding.

Shooting is also something that will oftentimesremain consistent from level to level, as the rim is 10 feet tall and 18 inches wide everywhere outside of the first- and second-grade Boys and Girls Club league. Sometimes having a large dip in shot attempts messes with a shooter's rhythm. When Steve Kerr was entering the twilight of his career in San Antonio, and he started working with one of the most revered shooting coaches of all time in Chip Engelland. When Kerr was in Portland suffering through a bad slump, well, I'll let Bill Barnwell take it away.

"He understands that a big part of shooting is the shooter’s mind," Kerr said, and a moment toward the end of Kerr’s career provided such an example. With Kerr playing reduced minutes in Portland as a 36-year-old during the 2001-02 campaign, he found himself struggling to stay loose for meaningful shooting opportunities. Kerr told Engelland about his problem and the shooting expert flew up and offered a solution: a 30-minute, seven-shot workout. Kerr and Engelland would sit alone on the bench in the Portland practice facility after everybody else had left. Engelland would ask Kerr to tell him what was going on with his kids or even leave him to read a newspaper. After a few minutes, Engelland would shout at Kerr to go, and the two would sprint off the bench and set Kerr up for a single 3-point attempt from the wing before returning to the bench. Repeat six more times and you’ve got the league’s most unlikely — and simultaneously most logical — shooting workout. A typical shooting coach, Kerr said, would have noted his struggles and told him to take 200 shots from a variety of spots to try to regain his physical rhythm. Instead, Engelland put himself in Kerr’s shoes to help refresh Kerr’s mental timing.

That story has little to do with Anderson, but it is really interesting nonetheless. I believe that his shooting will come back to a little under 40 percent for his senior season, personally. 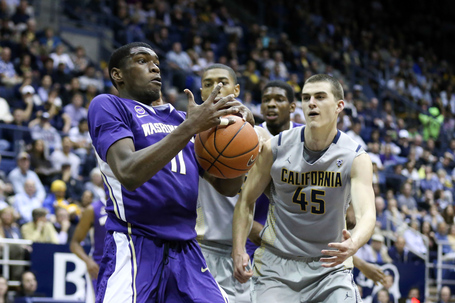 I was perusing kenpom.com, and I came across an interesting tidbit: Anderson's defensive rebounding rate of 19.4 percent was nationally ranked (242nd, but still). I took a look at the top 193 (that's as much as Statsheet.com would show, KenPom will only give the top 100) and there were only a handful of players standing at 6'4 or shorter who were on the list. A major thing that I noticed, was that none of the players who did so were in major conferences.

To be fair, most players who stand 6'4 don't play on the interior as much as Anderson did. His rebounding and tenacity were the biggest reasons he was able to withstand the punishment of being down low all season long. That is no small feat for a player as undersized as Anderson was.

Granted, his high top fade from early in the season might have given him an extra inch or two in height. I still remember when he cut his hair, I was doped out on pain pills from my knee surgery. It took me the better part of 15 minutes to figure out that the Huskies didn't get a new player, but it was actually Anderson. I didn't write the recap for that game.

Not only did Anderson lead the Huskies in defensive rebounding percentage, he was top 10 in the Pac-12, ahead of Aaron Gordon, Tony Parker and Dwight Powell. These guys all spent a majority of their time defensively on the interior, more than Anderson, who was still allowed to venture out to the three-point line at times.

Something that I noted in a recap at some point during the season is that something Anderson was better at than most players (possibly because of his experience as a wing) was delivering outlet passes following defensive rebounds. His passes were oftentimes pushing the ball up the court quickly and accurately. When this is combined with the sheer number of offensive boards he pulled down, it was a definite recipe for success in the transition game.

No, Anderson wasn't a ridiculous shooter last season, or a prolific scorer, but he was still able to make a major contribution through his rebounding and effort in the paint. That's not what he was recruited here to do, but he did it very well. Let's hope he isn't forced to do it as much again next season.