Share All sharing options for: Adams' career-high 31 too much for Washington, Bruins win 91-82

The game was entertaining for fans for 36 minutes. It was high-scoring, both teams were hitting big shots and it was tight. Neither the Washington Huskies nor the UCLA Bruins could grab a firm hold on the lead. The lead actually changed hands more than 20 times throughout the course of the game.

UCLA proved why it belongs in the NCAA Tournament while Washington proved that it belongs fighting for a spot in the NIT, and the Bruins walked out of Hec Ed with a 91-82 victory.

There was no answer to be had for Jordan Adams all night long. Early, C.J. Wilcox would match the sophomore guard point for point, but Adams' transition scoring was not to be denied. He continued to attack the basket whenever he had the opportunity. He finished with 31 points, a career high. During the game, he took over the single-season UCLA steals record passing UW assistant coach and current Seattle head coach Cameron Dollar.

Adams went out with cramps in the second half with about eight and a half minutes remaining, he came back in but didn't score from then on. His final stat line was the career-high 31 points, three rebounds, three assists, two steals and a block. He didn't turn the ball over and finished 11-of-15 from the field and 8-of-9 from the charity stripe.

When Adams initially went out, his Bruins were up nine with momentum. The Huskies were doing their best to claw back into the game that was once a back-and-forth affair, but then Bothell-native Zach LaVine, possibly the best athlete in the Pac-12, took over. He used his length, vertical and body control to finish in traffic numerous times, including two and-one layups.

Not to be lost amidst the loss was the fact that Wilcox had a game reminiscent of early-conference play. He finished with 20 points, going 4-10 from behind the arc with three rebounds and two assists. He did foul out, but his final foul was intentional in an effort to stop the clock and prolong the game. When Wilcox started 0-2, it almost seemed like the Huskies were going to struggle to score as a whole.

Wilcox was determined to shoot and to find his stroke. He did, eventually. In the first 11 minutes of the game he put up 10 points and was matching Adams point -for-point. Eventually, the efficiency at the basket that Adams showed was too much for their contest, and with it the Bruins pulled away.

Stat of the Night: There were 14 points scored by Washington-native players. They were all by LaVine, for UCLA.

I have one Dot for you guys tonight, but it sort of a different one. Consider it a Dot even though though there is no bullet point. There will be an MS Paint picture in it, so bear with me.

UCLA employed a 2-3 zone for a lot of the night, and Washington attacked it in multiple ways: it employed the 'zonebuster' strategy by launching from deep, it worked. UCLA still persisted with the zone, and UW found other ways to exploit it, like getting the ball to the middle and kicking it out. This was also a big part of why the zonebuster strategy worked.

When I was in high school our standard 2-3 zone beater was Gonzaga (yeah, yeah, yeah). It had three players along the perimeter and two guys down low: 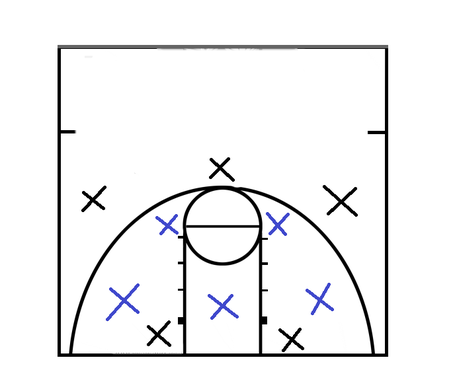 One of the best ways to score using this setup was by putting a ball-handler up top with the ability to get into the heart of the defense and draw in the middle post defender. He will have one of the two top defenders on his back, and that meant that there were two guys defending him in the middle of the lane (or more, as was the case at quite a few points tonight) and other players had chances to get open. This is how Blackwell and Kemp got open: 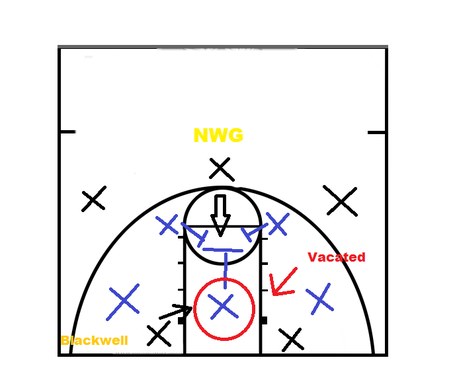 You can also see how the entire top of the defense collapses. Both wings are open. He can also pull up for a jumper. Andrews also has the ability to do this, he just doesn't have the vision of Williams-Goss. Andrews had a nice game until he disappeared along with the rest of the team for a stretch in the second half.

So there you have it folks. Gonzaga had more movement than that. If the ball was swung to a wing, the opposite post would flash to the elbow, and there were a few other nuances, but it was all just meant to attack the gaps. It is something UW did exceptionally well for most of the game tonight. The Dawgs just couldn't do the same amount of damage against the UCLA man defense.

Regular season wraps up Saturday against USC, about as close to a sure win as things can get.