Nigel Williams-Goss pushed for his name to be considered in Pac-12 Freshman of the Year voting with a double-double.

Share All sharing options for: C.J. Wilcox rediscovers his groove as UW blows out Oregon State 86-62

Washington has not been a good team on the road this season, it has been documented. Lorenzo Romar has talked about it. The last time UW won on the road was in its Pac-12 opener against Arizona State. This is really only the third time the Huskies have put together a good game on the road: when UW was still down in the desert they played some highly regarded Wildcats team and put up a really good fight.

If someone took how UW opened Pac-12 play on the road, and how it finished on the road (against Oregon and now Oregon State) one would get the impression that UW is one of the tougher teams to host, with the stinker against the Ducks being the outlier. Coming into the game, the only teams with victories in Corvallis were California and Coppin State.

The Dawgs added themselves to that list with a dominant effort over the Beavers, running the Beavers out of their own building 86-62.

The win wasn't due to a singular effort, but rather a bunch of different players doing exactly what is expected of them. C.J. Wilcox scored 23 points to bust out of his slump. He hasn't scored this many in a game since the Feb. 1 game against Washington State in which he scored 24. Nigel Williams-Goss was really the key to the offense, though. He did most of the scoring early for UW, and then transitioned to a distributor role and notched a double-double.

Andrew Andrews scored without taking stupid shots. Maybe that isn't what is expected of him, but it is what he is supposed to do. He did have a play late in the game where he had the ball on a fastbreak and missed the dunk after determining before the halfcourt line that he was going to go in for the flush.

It was clear from the opening minutes that the game was going to be up-and-down. Both offenses were clicking, and the defenses were obliging, for the most part. Roberto Nelson showed why he led the Pac-12 in scoring with a highlight jumper: he drove left, was stuffed by Wilcox, picked up his dribble, spun using his right foot as his pivot foot and faded to his right. Wilcox stuck to his hip the entire time, but to no avail and the jumper fell.

It didn't matter though, UW was not going to be stopped.

Washington made a big run to separate from the Beavers for good beginning with nine minutes left. The offense had been carried by Nigel Williams-Goss, but the Huskies were still trailing 25-19.

It began when C.J. Wilcox found his rhythm to put a stop to that. He sized up his defender on the left wing and rose up for a jumper. His foot was on the line, but it was a sign of what was to come. On the next trip down the floor, he hit a stepback three at the top of the key. A layup on the next UW possession following a TV timeout finished off a mini 7-0 run for C.J. Wilcox to put UW up.

It didn't stop there. Andrew Andrews hit jumpers to account for the next four points of the game, to finish an 11-0 total run. By the time the halftime buzzer sounded (and the confusion over a Mike Anderson foul was settled) Washington held a 44-33 lead; UW finished the half on a 23-8 run over the final nine minutes.

The second half continued with more of the same, and Washington cleared the bench. Senior walk-on Connor Smith scored the first two points of his career, Gilles Dierickx checked into the game, as did Quinn Sterling. Nobody healthy with a roster spot didn't see game action. 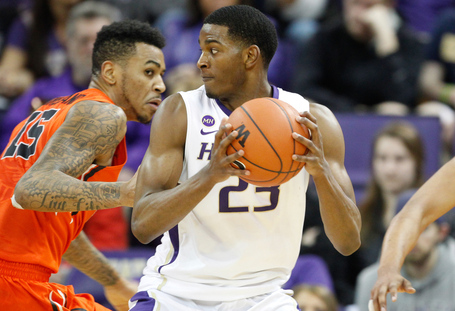 Neither picture is from this game because for some reason we don't have access to any of the photos to this game. Photo credit: Joe Nicholson - USA Today Sports

I missed stat of the night in my last recap, so I will give you two:

Stat of the night No. 1: Nigel Williams-Goss had the first points-assist double-double for the Huskies since Abdul Gaddy two seasons ago in the NIT against Oregon on March 20, 2012.

Stat of the night No. 2: C.J. Wilcox, as mentioned above, hasn't scored this many points since Feb. 1 against WSU. That isn't the stat. The stat is that he did it without attempting a single free throw. The only other time this season when Wilcox has scored over 20 points without attempting a free throw was his career-high of 31 against Colorado.

I only have two small Dots because I was so excited about the Huskies playing extremely well I completely forgot to take notes:

That's all folks. Have a good rest of your day. Huskies dominated, and I went the entire recap without making a sexual reference to the Huskies dominating the Beavers. Whoops, maybe football season.