Playoff expansion has been a major conversation for a while, easy to understand why: in a given year, any team would have a 1/8 chance of winning (or 1/12, depending on the model). In terms of probability, here's how you'd explain why:

This is the appeal of expanding the playoffs--more teams = increased odds. But this isn't really true. The more teams you have, the smaller the pie gets for a given period. Beyond that, the odds of actually winning aren't split at 50-50 per game.

See, the 8-team scenario described above depends on an equal chance of winning a game, and this simply is not reality. I haven't completed the work, but I have a running idea that resources (which include recruiting as a single but not imperative resource) are logarithmically distributed (see figure below). Basically, this graph is a mathy way of saying "the big guys have a lot, and there's not a ton of middle ground between them and everyone else." 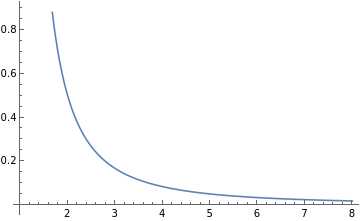 In this case, you need values that add up to 1 (or 100%) for a given number of teams; you can write this as

which ultimately results in x = 761/280 and can be used to determine the following: 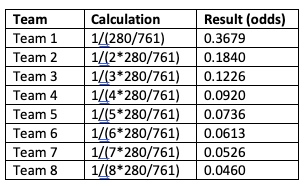 Now, here I have to say that this an "average" expectation and is not meant to be an exact model. It's just for theory. But, this results in the following odds for an 8-team playoff:

As you can see, only two teams have a better than 1/8 chance in winning it all--which means that the odds really skew from the have nots and towards the haves. This is why ‘Bama, Ohio State, and Clemson account for 75% (6/8) of the national championships.

Ah, but Oklahoma with plenty of resources and 4 playoff appearances in 8 years. Why haven't they won a championship? They are mathematically demonstratable underperformers despite the fancy pedigree. (And if I'm really going to be on a tangent, this is why I think that USC will be good but not great with Riley at the helm--he nominally benefits from largesse. He's no Saban, or he'd have won a championship in Oklahoma and wouldn't have needed to jump to USC.)

Back to playoff expansion. Given the above approximate model, it's not hard to speculate that *if* UW made it to the playoffs in the above 8-team scenario we'd fall somewhere in the scale of 0.0460 to 0.0736. The question then becomes: is that better than where we are *now*?

As you can see the current model actually offered better odds at winning, but there's one final consideration.

The details of the model are important, and if you reject the math (which honestly is a reasonable thing to do), there's still one major problem: we (UW) won't fall above the 50-50 skew line in a playoff scheme. In a four-team playoff, we'd have to win uphill odds in two successive games; an 8- or 12-team model calls for winning three or four, which exponentially compounds the issue.

This is why I believe that expanding the playoffs is fools gold. Rather than focusing on adding more teams to make the championships more competitive, the NCAA would be much better off trying to mitigate the resource constraint that favors a handful of teams.

A recent @kenpomeroy Tweet, reposted on the UW blog, overlapped with my assertion that probabilities are logarithmically distributed.

Kenpom's Pac-12 MBB odds are laid out game by game, from quarterfinals through championship rounds. Initially the odds are not logarithmic because they're factoring in game by game winnings--but the odds begin to take shape as the predicted finish approaches the tournament conclusion and results in a roughly logarithmic distribution, which echoes my above model even if the actual math surrounding it isn't the same. My overall conclusion--that the odds skew heavily in favor of a low number of teams at the disproportionate disfavor of the rest of the teams--is likewise supported. This is a great piece of evidence in support of rejecting NCAAF playoff expansion.

Here's a plot of Kenpom's odds: 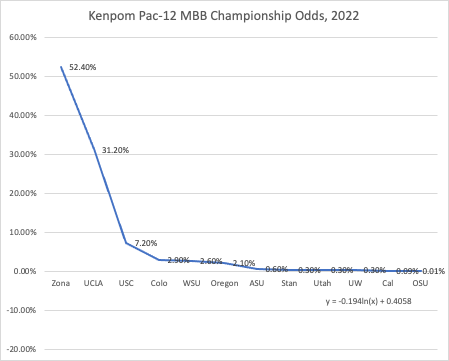