I had some time to break down the Stanford tape, and here are a few of my thoughts and observations.

Defensively this was a very frustrating game for our team. As most at home could tell, we got beaten physically in the trenches on a large number of snaps. The narrative that you heard from the commentators was that Stanford was down to their last 6 or 7 offensive linemen, and while Stanford may have been at the end of their depth chart and went away from their biggest packages, they still maintained their trademark gap run scheme. They repeatedly ran a combination of inside zone (IZ) and Duo down our defense's throat. IZ/Duo are very similar plays that are intended to be downhill runs between the tackles with double teams on two of our interior DL. The Duo plays in particular put an emphasis on getting movement on DTs so that the RB can get positive yards with the potential for a bigger play if he can make the unblocked LB miss. 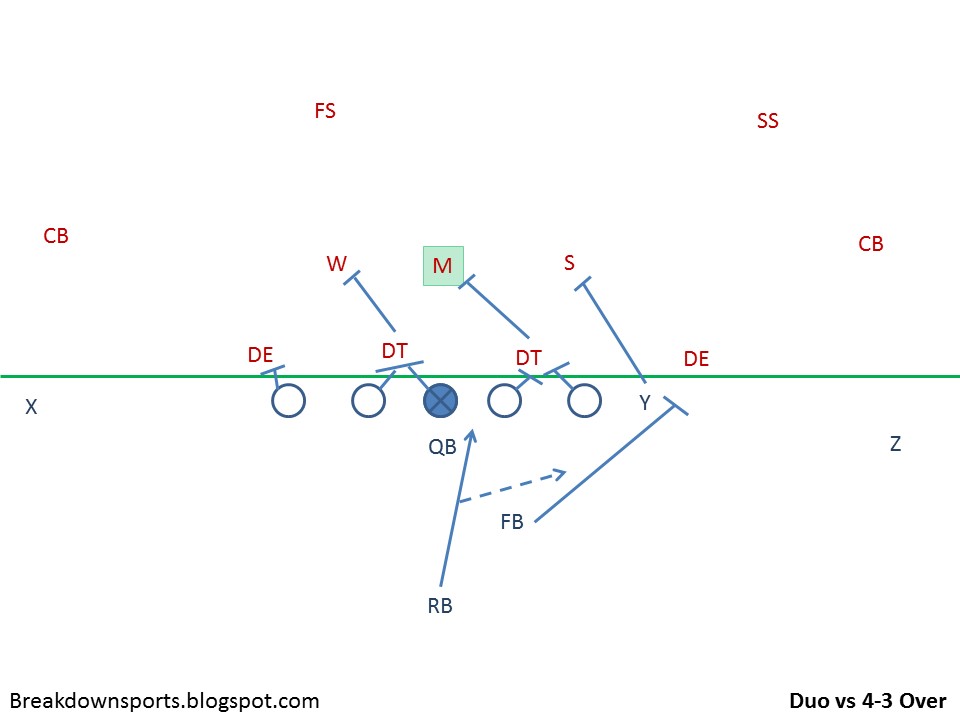 The combination of our relatively light DL starters (many of our most frustrating plays were with Benning, Levi, and Josiah Bronson on the field) and small or slow LBs (Wellington and Manu) were completely unprepared for Stanford's Cameron Scarlett running downhill on numerous Duo plays. Benning, Levi and Bronson were repeatedly chip-blocked 1-2 yards off the line without actually protecting our LBs from releasing OL. Unlike USC, Stanford was prepared for our quick DL, emphasizing chips and double teams all night, and we had very few defensive players in their backfield.

As for our LBs, the Richard Newton-sized Scarlett (6-1 216 lbs) and was a real challenge for them to tackle. Wellington was repeatedly bowled over when meeting RBs in the hole, and Manu was altogether run out of the play far too many times. Their tackling might have something to do with size, but at this point in the season it is really all about their "want to" and effort. There was really no excuse for their tackling effort.

One bright side to all of this though was how well I thought our young DL Tuli and Taki fared in comparison to our upperclassmen. Go back and look at the tape, and I will challenge you to find more than 2 or 3 plays where either of those two were blown off the line by a double team. They really showed their grit and power in the run game and definitely look to have some real upside. It surprised me that they didn't get more reps considering the opponent, and this would have to be yet another point of discussion when debating how effective our staff is of managing in-game adjustments.

Generally speaking, I thought that our defense played to about our standard of pass coverage for about 75% of the game. Our MO for the last few years has been to prevent the big play and force defenses to march down the field with efficiency. This has meant giving up 3-5 yard hitches and other underneath passes that we could rally and tackle. The problem with Stanford was that we gave up far too many chunk plays for this to be effective.

Obviously our defense isn't perfect, and we will give up the play action pass here and there, but the play that repeatedly jumped out to me on defense was our inability to stop the Slot Fade in the first half. Two different Stanford possessions were pushed into scoring territory by big plays by Simi Fehoko on Elijah Molden. The Slot Fade concept is a relatively new concept that is very popular these days, and it is a common way of isolating a mismatch in the slot in space, similar to a hot read Go route. Once the offense identifies that the defense is in man coverage and recognizes a mismatch in the slot, this play is often an audible that is available to QBs in the same way Go routes are often automatic audibles when 1-on-1 coverage is identified for your

This is done by having the outside receiver running a quick hitch to hold the CB close to the line of scrimmage, therefore opening that entire side of the field to the slot receiver to get open on a fade. The key to to a fade is to get an outside release , all while maintaining space between the route and the sideline so that the QB can drop the pass on the outside shoulder away from the DB. The outside release forces the DB to flip their hips away from the QB, which helps the WR gain separate, as well as force him to have to relocate the ball before attempting to make a play on it. The Slot Fade is particularly effective because of the starting alignment of the slot receiver. Starting inside gives him much more space towards the sideline to work with, and it generally allows for an easier pass for the QB. best receiver. 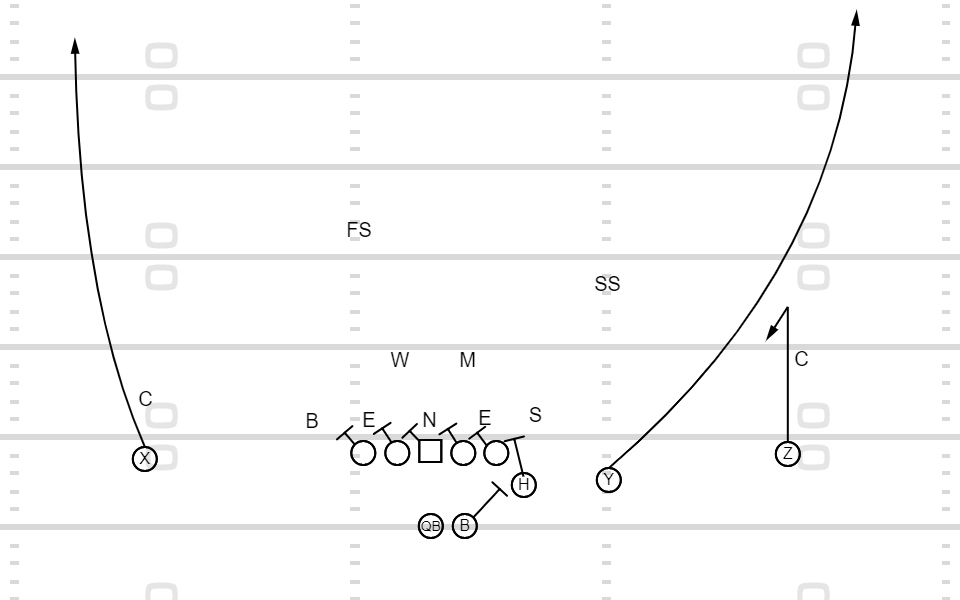 Stanford recognized early that Fehoko had 6" on Molden and that there was a good jump ball/big play opportunity. Our defense makes good use of Cover 1 with our lone deep safety playing center field around 25 yards deep, and since the safety is so deep, it is difficult for Williams or Bryant to break on a Slot Fade. This was a perfect situation for Stanford, and we didn't have a clear answer for it early, which led to Fehoko burning us for 26 and 23 yards on Slot Fades in the first two Stanford possessions.

Given the way that our defense is designed based on boundary/field designations, it is difficult to scheme away these mismatches. Since we don't like to rotate our DBs to different positions on the field (in this case Molden almost always plays on the field side), we can't just put a bigger DB like Taylor on a big WR like Fehoko. While Taylor has done shifted around to cover big WRs before, this didn't seem to be in the game plan this past week. Not to mention the fact that Stanford had multiple big targets that we just didn't have enough big DBs to match with (although no one really has enough to match Stanford's receiving corp). One potential adjustment would have been to play more 2 deep safety coverages. This would have created a bracket coverage effect, but this would have pulled a safety back deep, and we seemed to want to dedicate more bodies to the run game.

I hope UWDP's readers were watching carefully (and I guess Bush Hamdan too) when Stanford routinely gashed us in the screen game because that is how screens should be incorporated into an offense. I've been watching Stanford football since the beginning of the Harbaugh era and this might have been the most screen-heavy game plan that I've seen them run, and there are several reasons why they did so and why it worked.

The screen game reduces the number of drop back situations that Stanford's QB and OL had to face. Given that Mills was a young back up QB (albeit a very talented one) and their OL was similarly young and somewhat lacking in pass protection technique, Shaw probably knew that we wanted to bring pressure in passing situations. To compensate, Stanford leaned heavily on short one-read passes and screens to wear out our pass rush and play into our aggression. This really seemed to frustrate our players later in the game because it seemed like they weren't prepared for the number of screens that Stanford threw at them and were often caught chasing down ball carriers.

This is a good point to emphasized how important it was that Stanford utilized multiple screen concepts. Unlike Hamdan's screens WR screens out of empty formations inside the opponent's 40 yard line (*insert a very large eye roll), Stanford didn't seem to develop screen tendencies based on down and distance, formation, or favorite type, and they were used judiciously when we tipped our hand and showed our blitz.Just like it would be too predictable to only run one run play from the exact same formation every time, Stanford mixed up its screen games with RB slip screens, swing screens, WR smoke screens, and tunnel screens from a variety of formations. 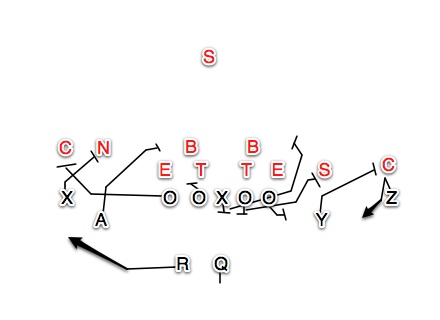 Switching over to our offense, I am at a loss of words to describe my confusion as to what we were trying to do on that side of the ball. We looked methodical and well rehearsed on our first series, then looked completely lost for the rest of the game. While we didn't have any glaring errors (the one pick was less of a miscue and more of an bad play), but our overall play calling and execution was unacceptable. While I was watching live I kept asking myself:

Now I don't have all the answers, and I certainly understand that all play calling is situational and contingent upon some information that I don't have as a viewer at home, but after watching the game film again, these were some of my follow up thoughts to my aforementioned questions:

Anyways, our Huskies still have a lot to play for this season, and I hope that they will learn a few lessons from this loss that will help our young team grow over the second half of the season.

As always, leave any questions or comments below and I'll try to answer as many as I can.