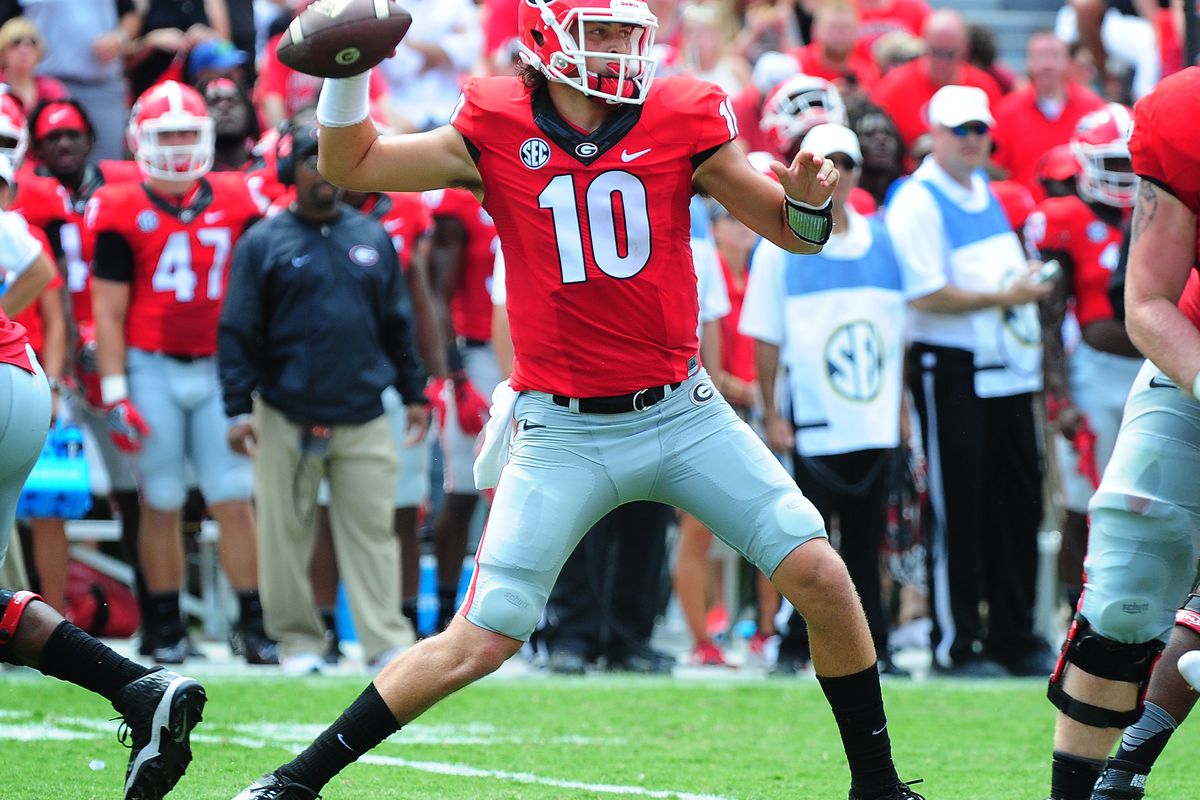 Just a quick check in this week on what might be the biggest development for the Huskies until the final NFL draft decisions are announced. As many of the Husky faithful have already been chatting about here at UWDP, there are reports that Jacob Eason is planning on transferring home to the University of Washington from Georgia. First off I want to clarify that I haven't seen any official reports that quote Eason on any decision, and I don't have any new developments. I just wanted to take a step back and see what the implications of his possible transfer might be.

First off, if Eason does indeed transfer to UW we would have a very full QB depth chart. This is already after KJ Carta-Samuels transfers out of UW after graduation. Having six QBs on the roster is a heavy scholarship load for any roster, but especially one that is trying to reload after an exodus of NFL talent. Any scholarship used on these QBs is one less that could shore up a depleted defensive line or RB stable. To make matters worse is the fact that the impact of these scholarships will likely be muted for at least another year.

With a well entrenched incumbent starter in Jake Browning, one who may not be a fan favorite but is definitely the staff's favorite, it is highly unlikely that any of the five other QBs see the field. In Eason's case, he is guaranteed to be redshirted in 2018 due to NCAA transfer rules. As for Yankoff and Sirmon, with neither likely to start, there is a chance that either one or both redshirt in 2018 depending on who wins the battle for the now vacated QB2 spot. Since both are enrolled for winter quarter, they are eligible to participate in Spring Practice, where either could win the back up job, but there is no guarantee that either win the job. If both end up redshirting, the Huskies might be stuck with up to 3 "dead weight" QBs taking scholarships for the 2018 season. Granted these should be viewed as investments into the position, but it still draws away valuable resources that could've been used on an impact player that would've help capitalize on the final year of Browning's UW career.

One final roster related issue to consider is the futures of the two other returning QBs. With the arrival of the three newcomers, if Haener and Bridge-Gadd can't make a statement during Spring Practice, neither have a clear path to the top of the depth chart. Since both are early in their careers, it is possible they seek a transfer. This would ease the scholarship situation and make it less likely that Eason would have to forego a scholarship during his redshirt season since this was an unexpected addition. Of course at this point this is all speculation, but these are very real possibilities.

Implications for the Huskies on the Field

Now that we broke down how this whole transfer would work out from a details perspective, let's get into the juicier side of this whole development. Jacob Eason has many of us Husky fans dreaming of national contention due to the fact that in many ways he is the "Anti-Jake Browing". Eason was a top 10 recruit nationally for the class of 2016, and while he was classified as a Pro-Style QB, he was considered a rocket-armed Pocket Passer with athletic qualities. His physical abilities characterize this contrast.

While Browning is known for smart execution of the system and maintaining a historically high efficiency, Eason is known for relying on his arm strength to support gunslinger mentality. In many ways this is a similar style to Favre-esque QBs. There are absolutely jaw-dropping passes that Eason completes on a regular basis. Passes that are threaded between defenders outside the far hashmarks are usually the most difficult throws to complete for even NFL QBs, but they weren't uncommon for Eason at Georgia.

It is this type of potential that have many fans clamoring for his transfer. These throws that Browning would likely never even attempt are exciting and open up many new possibilities for the playbook. However, it is Browning's technique, rhythm, and processing speed that allows the UW offensive playbook to be among the most extensive in college football. By maintaining the offensive flow and avoiding mistakes, Browning doesn't often force the offense into difficult situations. Therein lies the difficult balance for Petersen QBs. Deciding when to lean on ability and taking risks within the constraints of the system is a delicate balance that Browning found last year. Of course the 2016 team often had John Ross so wide open deep down the field that this wasn't always considered a great risk to throw downfield. 2017 showed that when Dante Pettis was often "open," but required much tighter throws that Browning wasn't always comfortable making.

Aside from his athletic upside, Eason was also placed in a rather favorable situation during his freshman year at UGA. With a deep stable of RBs featuring Nick Chubb and Sony Michel as well as a Kirby Smart coached SEC defense gave Eason the type of breathing room that Browning enjoyed in 2016 at UW. However, the 2019 roster that Eason may inherit after his redshirt year will likely require much more from the QB position. 2019 will have turnover at both tackle spots as well as possibly one of the interior OL positions. This will only be compounded by the graduation of Drew Sample, our best blocking TE, and the good possibility of no powerbacks on the roster to wear down opponents like Lavon Coleman. It is much more difficult to find sustained success when defenses are keying in on the passing game and a young OL. This is where Eason's underrated athleticism could come in handy, but his mechanical and mental inconsistencies might limit how far those physical tools can take him.

While Browning's passes often lacked zip and fluttered in the air too long, his passes were almost always thrown with anticipation before WRs made their breaks. This requires great rapport with receivers and the aforementioned offensive rhythm. With Eason, there were many times where you could see passes leap out of his hand down, only to flutter mid-air due to a wobbly spiral. Those that were rifled often lacked the necessary touch for the given route, and at other times were out of rhythm with the targeted receiver. The strong play-action based UGA passing game created wide enough passing windows that this didn't become a major problem, but in the event that UW turns to Eason to carry the offense, these are the issues that he might have to overcome.

If Eason can use his experience in Georgia, and learn from his freshman mistakes and inconsistencies, he will have a great chance for success in Montlake. Eason has all the talent to lead UW to a championship, and he may have least a year to prepare and develop under the close supervision of Coach Pete's staff, but he needs to capitalize on the opportunity to develop during the 2018 season to stand a chance at meeting the sky high expectations that have now been placed on him by many of us eager fans.

If you actually got to the end of this article and like what I'm writing or how I could improve, please let me know (I know I can be long winded). I'm interested to see what the UWDP community is interested in and please let me know if you have any football related topics you might want to learn more about.

Please leave a comment below and let me know what you think of the situation. I’m always interested in hearing the opinions of my fellow Huskies.