Defense remains optional for an Arizona program looking to make it back into the national conversation.

Share All sharing options for: the Gekko Files: Previewing Arizona Wildcats Football for 2016

It is remarkable how quickly things can change.

One minute you are sitting outside your Minnesota lake cabin soaking up the morning sunshine and dunking your doughnut in a cup of freshly perked coffee. The next you are bundling up your kids and checking the anti-freeze levels in the pickup.

One minute you are watching an outsider with no real qualifications and for whom nobody has subscribed a chance make a play for a presidential nomination. The next minute you are wondering if anybody can stop him.

This is what it is like to be a fan of a Rich Rodriguez-backed team. Fans of the Arizona Wildcats know this only too well.

2015 was supposed to be a breakout of sorts. The Wildcats were coming off a remarkable season where they had made a run at the College Football Playoffs. They had won the South Division and owned a victory over an Oregon Ducks team that many pundits point to as the turning point in the fortunes of the PAC's top program. They had done all this with a young roster and were returning a bunch of players with tremendous upside - guys like LB Scooby Wright, RB Nick Wilson, WR Cayleb Jones and QB Anu Solomon.

Three wins in an embarrassingly easy non-conference schedule (a RichRod hallmark) failed to effectively prepare the Wildcats for a tough PAC-12 season. Injuries to three of the stars noted above turned out to be too much for Arizona to absorb and the Wildcats turned in just three PAC wins - two of which came against Colorado and Oregon State. Along the way there were some embarrassing defeats, including a 49-3 clubbing at the hands of UW - a win that earned Arizona a 2% percentile rating for quality of play (that means it was in the 98th percentile of worst performances by any team in any game for the season).

I noted in last year's Gekko Files preview that Arizona looked exactly like the team they opened 2014 as, but that the question marks (offensive line, defense) would not be so easily overcome a second time. My prediction of them finishing "middle of the PAC" may have been too generous. Will 2016 go the same way, or is this a moment of change for Arizona? 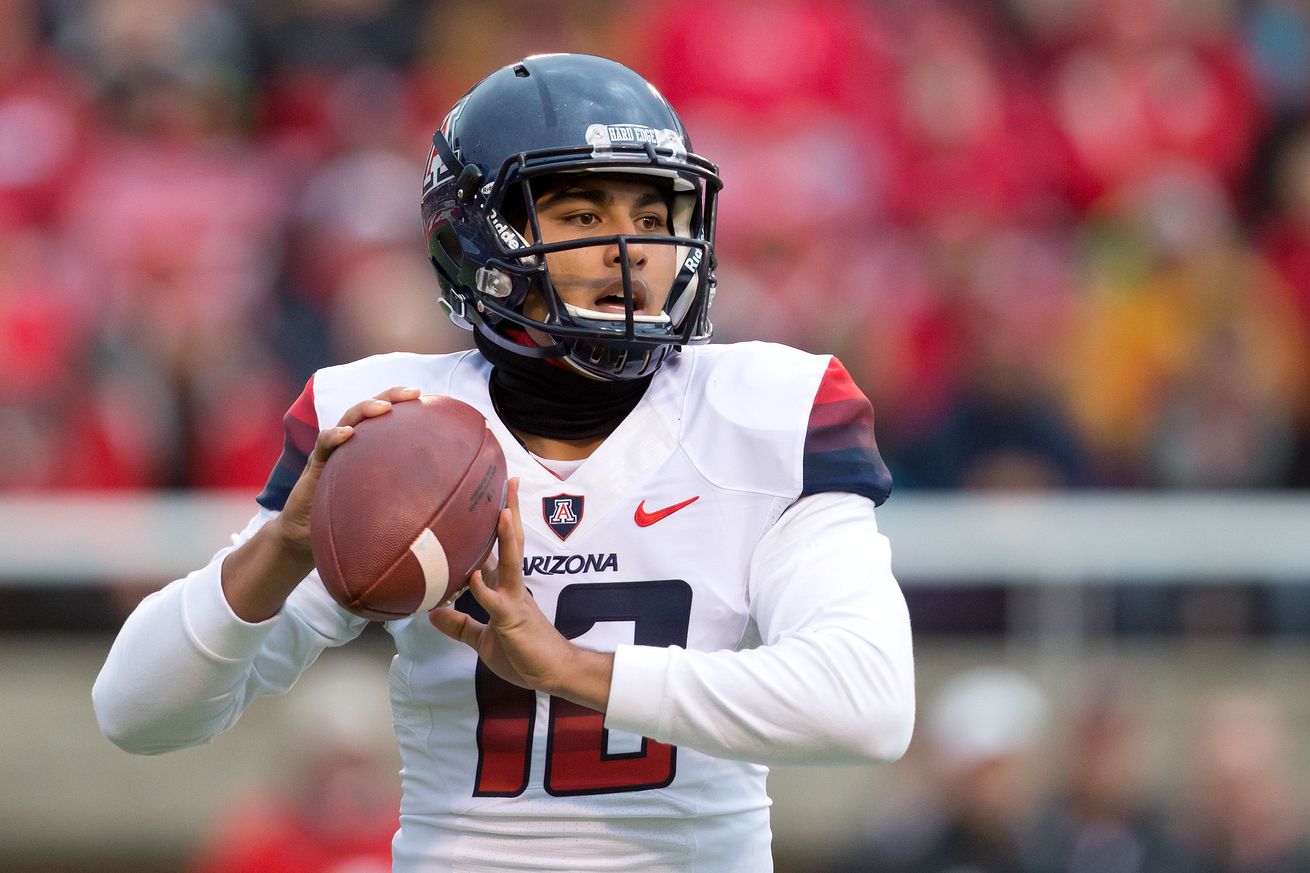 QB Anu Solomon finds himself on the hot seat after starting his first two years in Tucson.

Arizona goes into spring with a full-blown QB controversy on its hands. Two-year starter Anu Solomon struggled with health and ball security after having spent his freshman year struggling with consistency. It wasn't the progress that RichRod was hoping to see out of his young QB and it opened the door for Jerrard Randall to get a ton of snaps. This was bad news for an Arizona team that is increasingly more oriented to a spread pass attack than RichRod's tradition of being a spread-run team and it resulted in an offensive S&P ranking of 33rd - in the same ballpark as teams like Texas, Duke, Virginia and Cincinnati.  Hardly Arizona or RichRod-like.

The Wildcats coach parted with his longtime tactical partner as his trademark offense continues evolving. Another bowl trip in 2016?

As such, Arizona will have a full competition at QB. Solomon is the presumed starter and, truthfully, brings more to the table from a passing standpoint. Accuracy and arm strength are deficiencies for Solomon, but he knows the offense well, throws with anticipation, and has good rapport with his receivers. Sophomore Brandon Dawkins is his primary competition. Dawkins is far more athletic than Solomon but is really more of a runner. The few pass attempts we saw him throw last season reminded me of the look you get from a confused deer in the middle of a country highway.

Whichever QB wins the job, a few offensive weapons will be available to help in the transition - assuming they stay healthy. The three key names to keep in mind are RB Nick Wilson, WR Trey Griffey, and WR Samaje Grant. These three will have to carry the load for an offense that doesn't has the quality or depth of playmakers it had a year ago. Wilson is a steady, Bishop Sankey-style, efficient runner who doesn't wow you with his dimensions but does with his production. Griffey is the big receiver of the group who will be counted on to produce in the red zone. Grant is looking to bounce back after a down year and should be the move-the-chains guy in this offense.

The Arizona offensive line will have to go from "decent" to, at least, "good" if the offense is going to improve upon its performance from a year ago. They return four starters from that unit. It is a jumbo-sized line with three starters standing over 6'7" tall and one starter, LT Layth Friekh, at 6'5".  Former UW PSA, OT Michael Eletise from Hawaii, was the top player in RichRod's 2016 signing class and has a chance to break into the offensive line rotation given the lack of depth overall.  I like the top of the depth chart that Arizona boasts, but would start to worry if they suffer an injury or two. 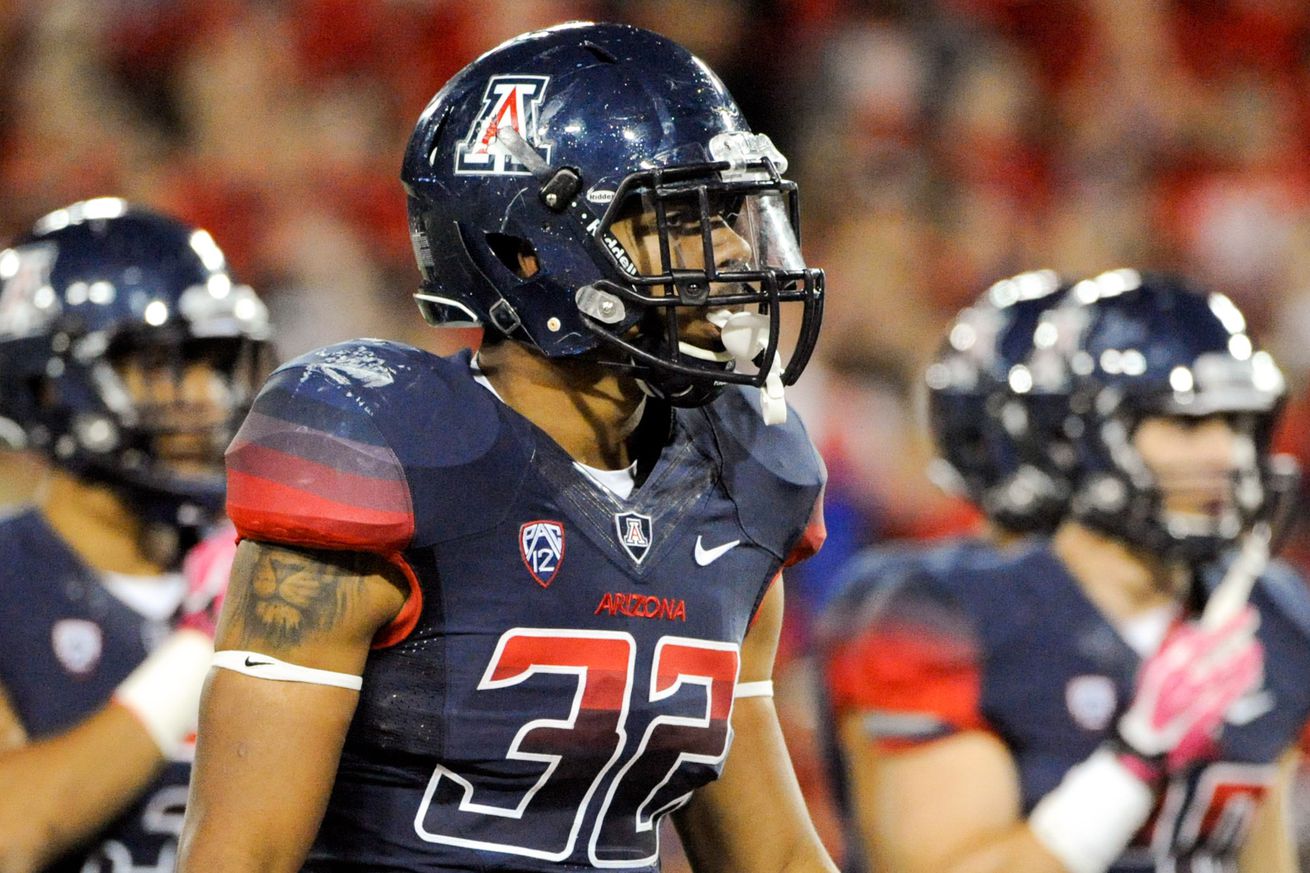 There are no two ways about it: this Arizona defense was bad in 2015. For a high-tempo team that will always put enormous pressure on its defense, Arizona and then-DC Jeff Casteel had elected to install a pure 3-3-5 scheme that relied on keeping extra players in coverage and creating pressure by mixing up linebacker blitzes. In 2014, it worked to perfection as the one-dimensional Scooby Wright finished third in the conference with 14 sacks (and won P12 DPOY over the sack leader, Hau'oli Kikaha, who had 19). 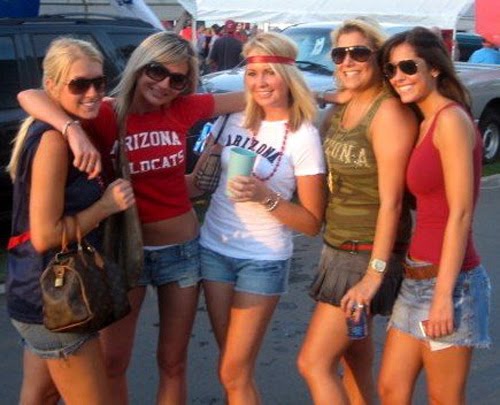 Enter former Boise State DC Marcel Yates. Unlike Casteel, he is the opposite of "bend-don't-break." Yates focuses on creating disruption and will deploy a very aggressive approach to the Arizona defense. I expect the 3-3-5 to be scrapped in favor of a more trendy hybrid style defense that makes use of a versatile outside backer.

The question is: who are the horses going to be? Their best unit may well be their secondary. I say that based more on experience than accomplishment. Seniors CB DaVonte' Neal and S Paul Magloire are probably the two best players on the entire defense. They are part of a group that boasts 13 players with game experience. Their scheme will be different this year and they will be forced into more single coverage and bigger zone situations. It remains to be seen if they can withstand the pressure.

The front seven for Arizona is a total mess. LB DeAndre' Miller is going to be counted on to provide stability in the second level. He's a strong backer who shows a nice ability to shed blocks and get to ball carriers in the backfield. In Yates's scheme - more of a 4-2-5 - he'll probably play along side senior Cody Ippolito (returning from a year-long injury) or Magloire if he drops down from the safety position.

The defensive line is a smallish unit that really will take its blows in 2016. The starters are likely to be junior Luca Bruno (6'4" 300) and senior Sani Fuimaono at DT (6'1", 290). Underdog Parker Zellers - at 247 lbs. - will be the "big DE" while the pass rush upside comes with junior DE Jack Banda. Banda is a name to watch if you are looking for somebody who might have some upside. Another young rotation player who might start to garner some attention is sophomore DT Marcus Griffin.

I admit that it is hard to look at a player who is a senior and who has 56 career receptions and note him as a "breakout candidate."  However, I think the term neatly applies to Griffey in this situation.

Arizona's pass offense is similar to a lot of other spread pass teams in that it relies on the QB making a quick judgement on where the mismatches exist in three and four-receiver sets, then putting the ball into the open zone as the first and only read. This results in a whole lot of short passes as defenses tend to prioritize taking away the back of the zone before the front. However, to make this scheme work, you need to connect on some deep shots.  For Arizona to do so, Griffey is the only real option.

In fact, before he got hurt a year ago, Griffey was already stepping into that role. He averaged over 25 yards a catch on his 11 receptions. This season, I see Griffey getting the vast majority of those big play opportunities for RichRod. If he has a QB that can make the throws, Griffey has all the tools to convert them into big plays: great size, developed ball skills, and senior savvy in creating separation.

I do believe that Solomon will retain his starting job and I think that bodes very well for Griffey. If he can stay healthy, I'd expect in the ballpark of 700 yards and 9 or 10 TDs in a year that could really propel his NFL draft stock.

I don't see 2016 turning out very well for this iteration of the Arizona Wildcats. The big, glaring gap in their overall package is a defensive unit that just won't have the pieces it needs to effectively execute a newly installed 4-2-5 scheme. They lack size up front and won't have the capacity to withstand any kind of attrition. In fact, if this unit manages simply to hold serve on the 35.8 points a game it surrendered a year ago, you'd have to call that a "win."

Unfortunately, I do not believe that this offense can consistently put up 35.8 points a game against PAC-12 competition. I do believe that the offensive line might be good enough to get it done, and that there are some interesting play makers in Griffey and Wilson. I'm also experienced enough in this gig to know that RichRod's playbook, itself, is probably worth 6 points a game. The uncertainty at QB is too tough to digest. I also can't help but think that there aren't any new playmakers ready to step up if any of the vets who have already struggled with injuries get hurt again.

The schedule does provide a little bit of relief. The home opener against BYU is a departure for RichRod (who loves his early season cupcakes). However, the rest of the schedule looks manageable. Arizona misses both Oregon and Cal, two teams who could really punish that Wildcat defense. In addition, they end the season with the possibility to gain some momentum as WSU, Colorado, Oregon State, and ASU are all on the schedule.

If Arizona can get some rhythm offensively, stay relatively healthy, and find a defensive playmaker or two, they could finish the season strong. I'm just having a hard time seeing it happen. This feels like another 3-win team to me (in conference play) and one that will struggle to reach bowl eligibility.