Now back at full strength with a new AD, a new head coach, and a fully stocked roster, USC looks ready to reclaim its position as the standard bearer for the PAC-12.

Share All sharing options for: the Gekko Files: Previewing USC Trojans Football for 2016

I can think of some examples that are comparable.

All of those were bad years for the subject in question. With the exception of the Mariners, at least those examples were limited to just one bad year.

For USC, the rollercoaster ride that has been Trojan football has been and continues to be a cluster of epic proportions, one that has now gone for about 15 years. Consider a brief history of USC football:

2010 - USC gets clobbered by the NCAA for recruiting irregularities around Reggie Bush, receiving a two-year bowl ban, a vacating of all wins that Bush participated in, and a 30-scholarship reduction.

2011 - USC wins South under Kiffin, but is ineligible for postseason and cedes South title to UCLA.

2013 - Lane Kiffin fired midway through the season while on the tarmac boarding the team plane; assistant Ed Orgeron replaces him.

2015 - Sarkisian fired after a series of alcohol-related incidents, including a drunken rant at an alumni event and a dismissal from a practice after showing up intoxicated. Assistant Clay Helton takes over.

Obviously, 2015 wasn't the season that USC fans were hoping for. Despite being loaded with a roster that featured A-List talents such as LB Su'a Cravens, WR JuJu Smith, CB Adoree' Jackson, and QB Cody Kessler, USC just couldn't overcome the drama. It went better than you may think - USC did finish 6-3 in the conference overall, good enough to win the South and take a trip to the PAC-12 Championship game. But they would go on to lose both of their last games - to Stanford and to Wisconsin in the Holiday Bowl.

The Trojans enter 2016 in arguably their most stable state since the 2009 season. They are back to a full roster, they have a coach with no real connections to the Carroll era and they still feature a roster of top-grade talent. But is it enough to repeat as South champions and go all the way?

That's a question for the Gekko. 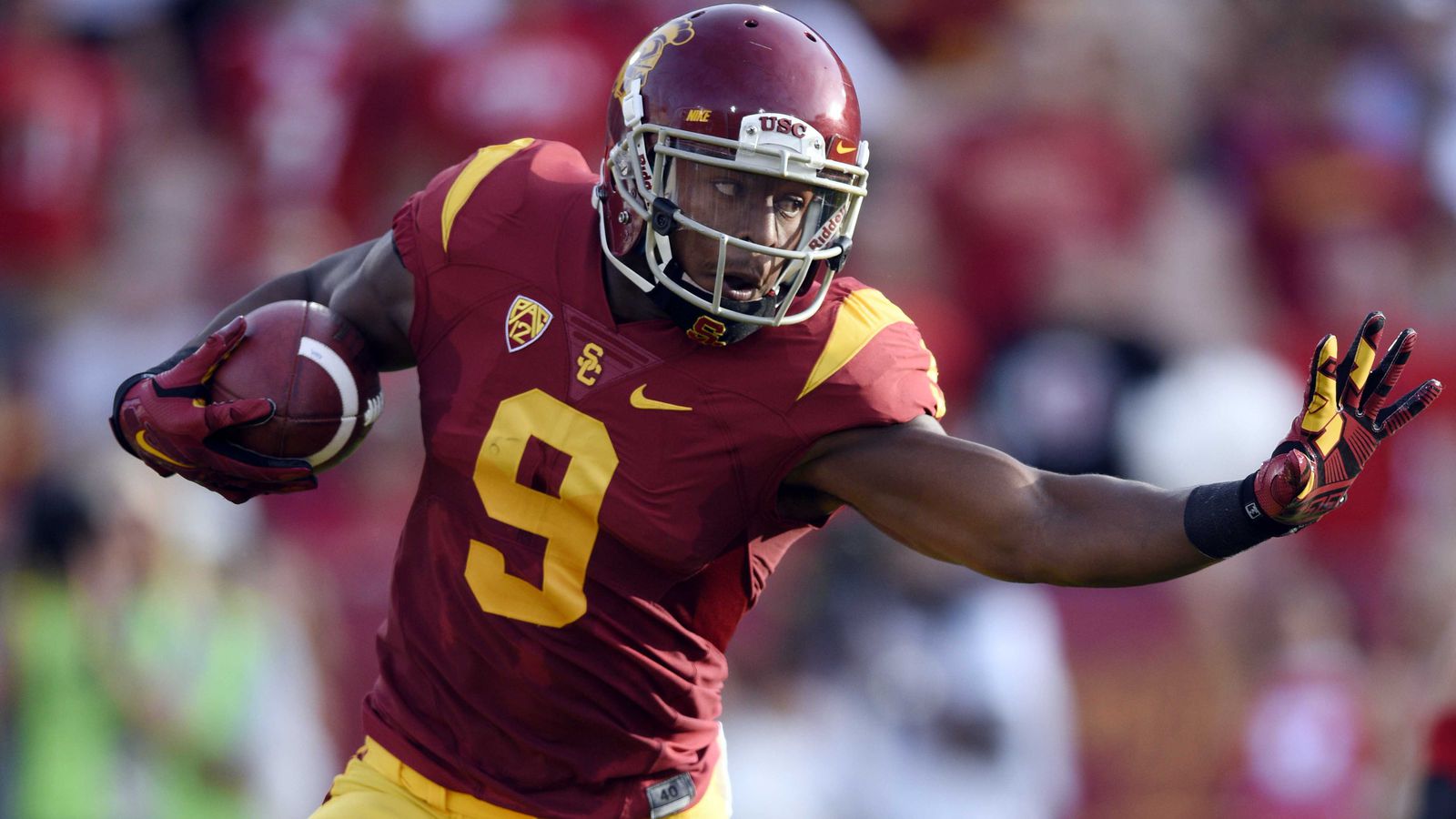 A preview of things to come? USC's JuJu Smith-Schuster might well be the top receiver in the nation.

Let's just get this out of the way right now: USC has a scary offense. It may not look to be obvious at first blush. Injuries - particularly those on the offensive line - and off-field distractions conspired to depress their overall output a year ago. They finished just sixth in the PAC in scoring offense and seventh in total offense, despite boasting a stable of playmaking talent that had no peers in the conference.

The Trojans' post-Pete Carroll years are looking like what Bama went through after the end of Bear Bryant's reign. Hey, those two schools play in a few weeks.

The Gekko Files are back for another summertime spin. Next up our Pac 12 preview tour-de-force is a long look at the USC Trojans.

Much of that talent returns in 2016. The offensive line, if it can stay healthy, projects as one of the top two units in the PAC. The headliner is OT Zach Banner, the son of UW great Lincoln Kennedy. The 6'9", 360-lb behemoth is more athletic than you think and is very likely a first-round NFL pick waiting to happen. He is joined by no fewer than eight fellow linemen who can claim "starting experience" thanks to the injuries from a year ago. Senior LT Chad Wheeler, junior OG Damien Mama, and junior C Toa Lobendahn are all "top of conference" kinds of players and will set a particularly strong wall for the Trojans' new QB.

Oh yeah, about that QB. Another Washington state product, junior Max Browne, was once the #1 QB recruit in the nation. He's now the presumptive starter for Clay Helton's offense. Browne is a tall, lanky QB with decent mobility, plus arm strength and strong fundamentals. He's not been tested extensively under fire, so it is hard to say exacly how he will perform against live bullets. But he has the tools and the maturity to be an instant impact player. I think that his ceiling is far higher than that of his predecessor and I expect him to perform very well. If for some reason he falters, USC might have some problems. Big RS freshman Sam Darnold is probably next up before they get to true freshman Matt Fink. That, however, is not a situation anybody wants to see unfold.

Fortunately, whichever QB takes the snaps, the conference's best RB duo is ready to take the pressure off. Ronald Jones III and Justin Davis each topped 900 yards a year ago and both project to top that in 2016. Helton is committed to a pro-style, run-first offense which will feature heavy doses of both backs behind that massive offensive line. Both are similar in style, though Jones probably has more overall explosiveness. There are going to be a lot of yards and TDs scored by both players.

The receiving corps is also loaded. Junior JuJu Smith-Schuster returns for what is certainly his final season and is probably the best receiver in the nation. Junior Steven Mitchell and senior Darreus Rogers would be stars on most other teams and provide experienced depth for the Trojans. There is also plenty of young talent to tap into such as 5-star Tyler Vaughns, playmaker extraordinaire Jack Jones, and big man Michael Pittman Jr. The one glaring gap in the lineup for Helton is at TE. There aren't many bodies available, which implies that you might be seeing a lot of creative ways to compensate. That could include 6-OL sets as well as instances with both Davis and Jones in the backfield together. 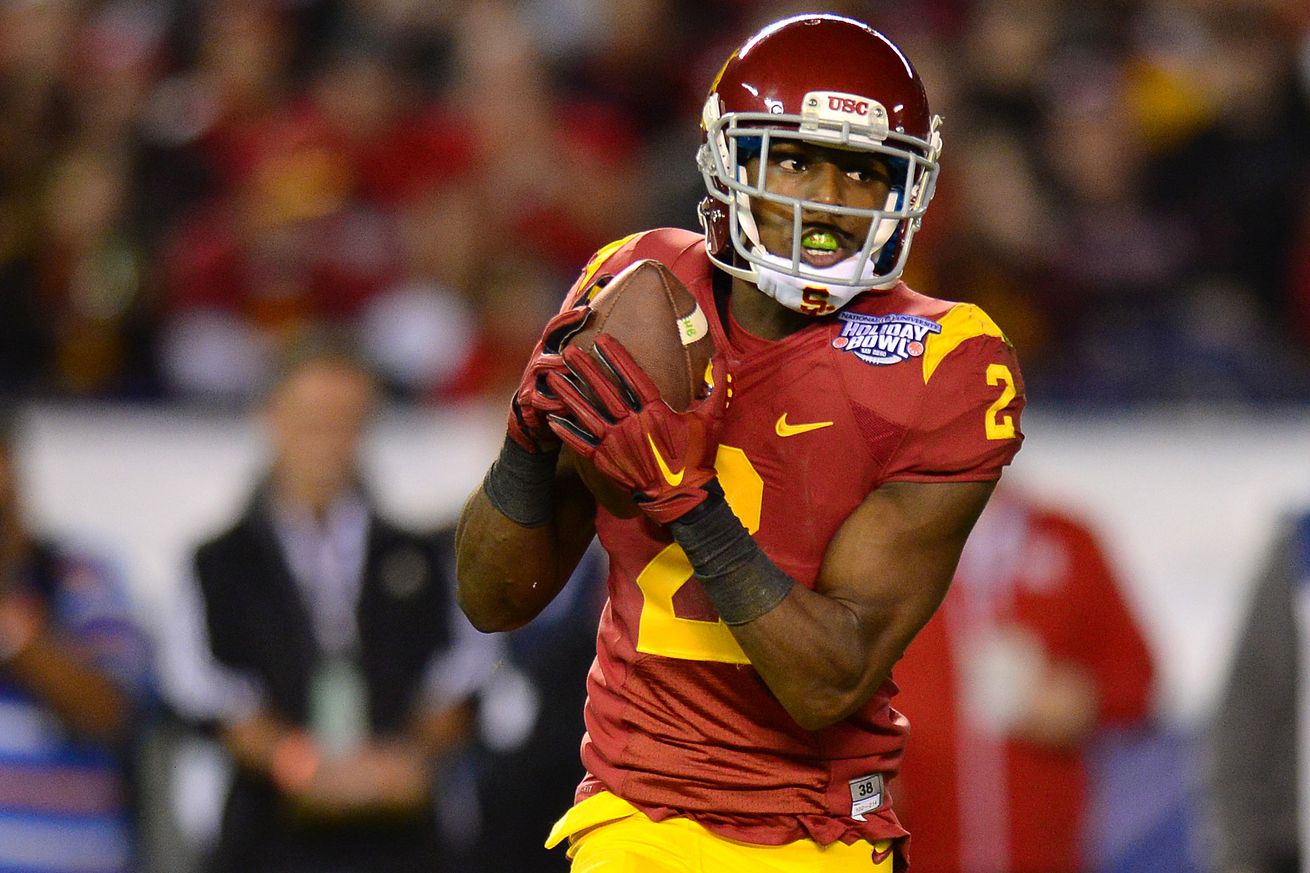 If you are looking for a weak link for the Trojans, you'll probably find it somewhere on the defensive side of the ball.  I'm just not quite sure how weak that space will be. At least not yet.

It might well be the defensive line. New (old?) DC Clancy Pendergast inherits a whole new unit to staff his 5-2 front seven thanks to the moving on of stars Delvon Simmons, Antuwan Woods and Greg Townsend. Taking their places are a bunch of parts you might not have heard of before. Sophomores Rashaun Green and 330-lb man-child Noah Jefferson are the main pieces that will plug the middle of the line. JUCO transfer Josh Fatu, sophomore Malik Dorton, and pass-rush specialist Porter Gustin are key players who will have the names called many times. The youth and inexperience of this unit opens the door for a true freshman that I'm particularly intrigued by, 5-star Oluwole Betiku, to have a breakout.

If defensive line depth is a problem, it isn't so with the USC linebacking corps. The challenge there is recovering from the loss of star Su'a Cravens and his 15.5 TFLs, 5.5 sacks and 2 INTs. MLB Cameron Smith is certain to be a starter, though he will face competition from the man who replaced him after an injury in Olajuwon Tucker. Both are good-sized, athletic MIKEs who excel in coverage. I mentioned Gustin as a pass-rush specialist already. Keep your eye on sophomore OLB Osa Masina. He's a Travis Feeney clone at 6'4" 230 with freak athleticism. He struggled last year, but might really blow up in a new scheme that seems to better fit his game.

The secondary is in good shape overall.  Adoree' Jackson - who was competing in Olympic qualifiers as I wrote this - is one of the most explosive players in the nation whether he is playing WR or CB. He is the star of this defense and the rock of the secondary. Sophomore CB Iman Marshall returns after a breakout true freshman campaign. Depth at safety is ridiculous with guys like junior John Plattenburg (remember him?), junior Chris Hawkins, and senior Leon McQuay all in the mix. This unit will compete with UW and UCLA as the best secondary in the conference, if not the nation.

I almost went with freshman Betiku here, but the selection of Browne is almost too obvious. As I noted, Browne has all of tools you look for in a QB - he can see over the line, he's got great mechanics, and he delivers a well-spun ball, even if he doesn't have a bazooka arm. He's waited patiently in the wings for three years and his time has finally come.

He walks into a situation that is almost too good to be true. His OL projects as a dominating unit that specializes in pass protection. He's got two fantastic RBs who will shoulder more than 50% of the offensive snaps. When he does drop back to pass, he's got a mix of proven stars (JuJu, Adoree', Rogers, Mitchell) and absurd young talent (Jones, Vaughns, and Pittman) to leverage.

If Browne doesn't break out, it might qualify as the biggest flop in Los Angeles history (at least since Ishtar).

There is no doubt that the South is shaping up to be a three-man race between the "Southern U's" - Utah, UCLA, and USC. I haven't done my game-by-game forecasts yet, so I don't have a good sense of exactly where things are going to fall. However, I'd be shocked if USC wasn't in it until the very end.

The schedule bothers me. Not only does USC have to contend with the most difficult schedule in the nation (thanks to a road trip to Alabama in Week 1 and a finale versus Notre Dame), but they have to endure a PAC-12 schedule that is back-loaded. Their last three are vs Oregon, @ UW, and @ UCLA. They also have to endure road trips to Stanford and Utah during the regular season. That, my friends, is an absolute bitch of a schedule.

I'm inclined not to go in favor of USC to win the South. Despite all of the sparkling pieces and my confidence that the offensive and defensive schemes now match the personnel on the roster, the combination of a brutal schedule and youth in the defensive front seven are just enough to tip the scales away from the Trojans. It still isn't clear to me exactly how all of the players are going to mesh with an overhauled coaching staff and, honestly, it remains to be seen whether or not Clay Helton is in over his head. For all of those reasons, I'm thinking that 5 or 6 conference wins will keep them in the race, but not enough to pull it out in the end.