Which came first? The QB or the Bear Raid. The answer to that and other impossibly obtuse questions in today's Gekko Files.

Before we dive too deeply into this epic preview, let's dispense with the pleasantries, shall we?

Yes, I will have Cal ranked too high.

If you can't handle a Cal love fest (and, to be sure, I'm one of the most popular guest fanbase figures in the history of the outstanding Cal Golden Blogs venture), you might consider investing the next ten minutes reading Ryan's excellent editorial on the Art Briles scandal.

Should you still be reading as far as these words, I say to you "welcome".  And thanks for sticking with me.  Glad to have you.

Last year in this space, we were projecting Cal as a team on the rise.  We postulated that Goff would, indeed, breakout and that the Cal offense could be tops in the PAC.  We also surmised that Cal's defense, while definitely "a problem," only had to hold serve in order for Cal to break into contender status in the North.  For the most part, that projection held.

But 2016 is a new season.  Gone is #1 NFL draft pick Jared Goff, his entire receiving corps, and former offensive coordinator / Goff-whisperer Tony Franklin.  Could these massive losses pull Cal back into the bottom trenches of the North division?  Or will a new, more balanced Cal team now fully loaded with Sonny Dykes recruits continue the upward trajectory of the program?

Who knows?  The Gekko does. 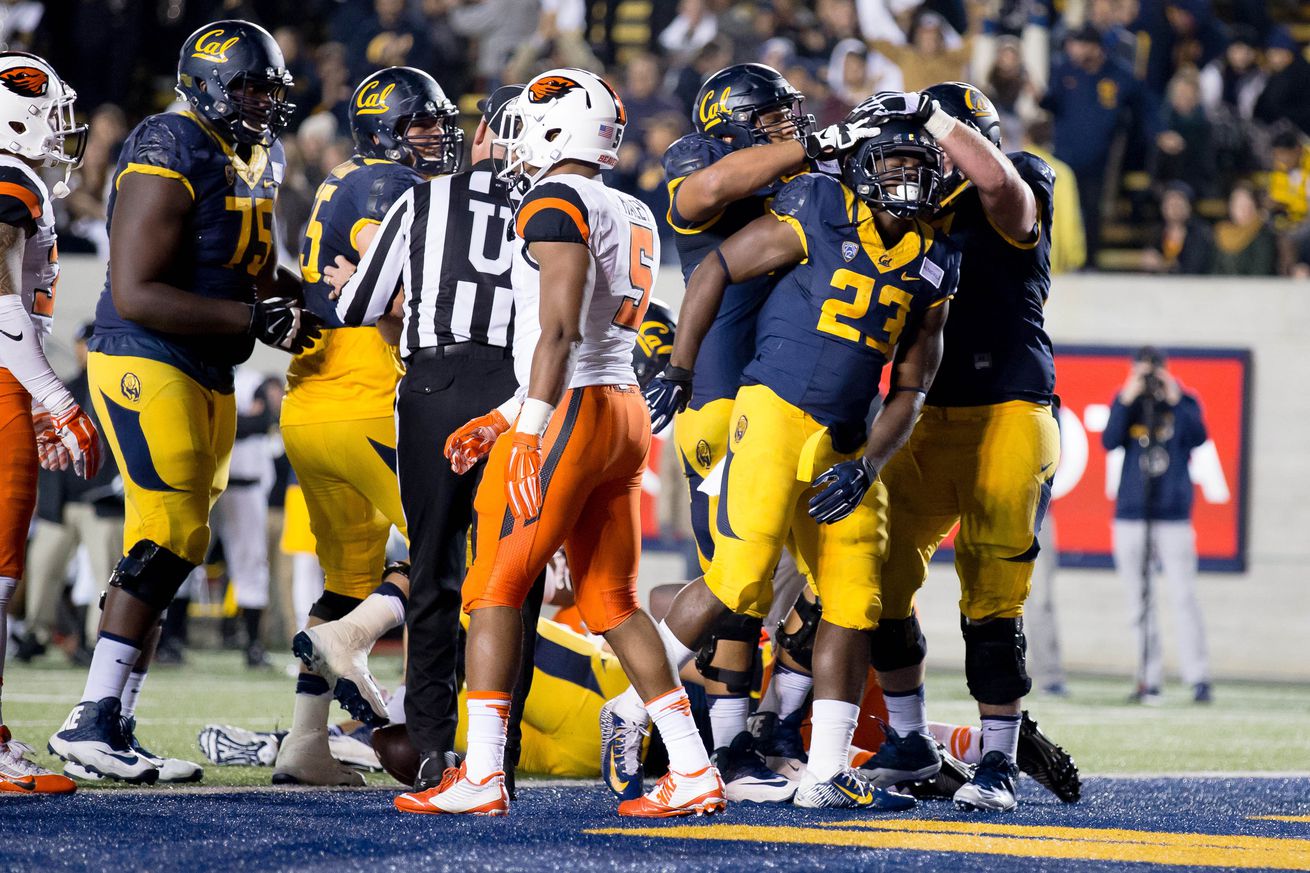 For three years, #1 NFL Draft pick Jared Goff went from the great hope to the only hope for a Cal team that has desperately tried to establish itself as one of the top tier PAC teams.  In many ways, he was successful.  From 2013 to 2015, Cal went from the lowest scoring offense in the conference to its second highest.  Now Sonny Dykes faces the prospect of replacing the only QB that he has had in his tenure with the Bears.  The field is crowded.

The QB race is a three man affair.  Chase Forrest is a big-armed veteran who served as Goff's backup a year ago.  Redshirt Ross Bowers could be a factor given reports of his overall headiness and grasp of an offensive scheme that emphasizes simplicity and decision-making.  The smart money, however, is on incoming Texas Tech transfer senior Davis Webb.  The 6'5" 220 lb flame thrower is an acolyte of the system that new offensive QB Jake Spavital runs and figures to come in with enough expertise in the system that his other skills could well carry him to the top of the depth chart.

No matter who takes over as the signal caller, the issue of who he will throw to is one that cannot be ignored.  Gone from last year's high flying offense are the entire first and second strings of the receiving corps.  This is an issue for a team that racked up just less than 200 total yards in total passing than WSU, but more than 2 yards more per attempt.  The top returning wideouts are Junior Chase Chad Hansen with 13 catches and Sophomore Kanawai Noa with 7 catches.  Redshirt freshmen Patrick Worstell and Brandon Singleton (still with four years of eligibility following a medical redshirt year), are the names that UW fans will want to pay attention to as the likely "next men up" and, frankly, look every bit as good as the players that they are replacing.  Look for true freshmen Jordan Duncan and Melquise Stovall to also factor significantly in the mix.

The young receiving corps will be complemented by the three man rushing attack of Khalfani Muhammad, Tre Watson and Vic Enwere.  While Muhammad is the name that many casual fans associate with the starting role, it is Enwere who is the work horse for Dykes.  While carries will be shared liberally, Enwere is likely to gather the most of them.  As the biggest of Cal's backs, Enwere is not a big play threat.  He averaged less than 5 yards per carry a year ago.  But he is just the kind of banger that keeps the defense from going crazy with the pass rush and who can push the ball forward in short yardage situations.  Muhammad remains the big play threat while true freshman Derrick Clark hovers as a possible breakout star come his fall.

The combination of that rushing attack and Cal's offensive line, both units of which have seen very little turnover from last year, are the great hope for Cal fans.  Normally, experience at offensive line is considered to be a good thing.  However, Cal's line remains a question mark despite returning four starters from a year ago.  The reason is that they were simply just OK as a unit a year ago.  The left side of the line is where the potential lies. LG Chris Borrayo and LT Aaron Cochran are probably their two best players - both more effective as pass blockers than rush blockers.  Dykes has been working hard to stock this line and my bet is that we'll see this unit continue to evolve positively in 2016. 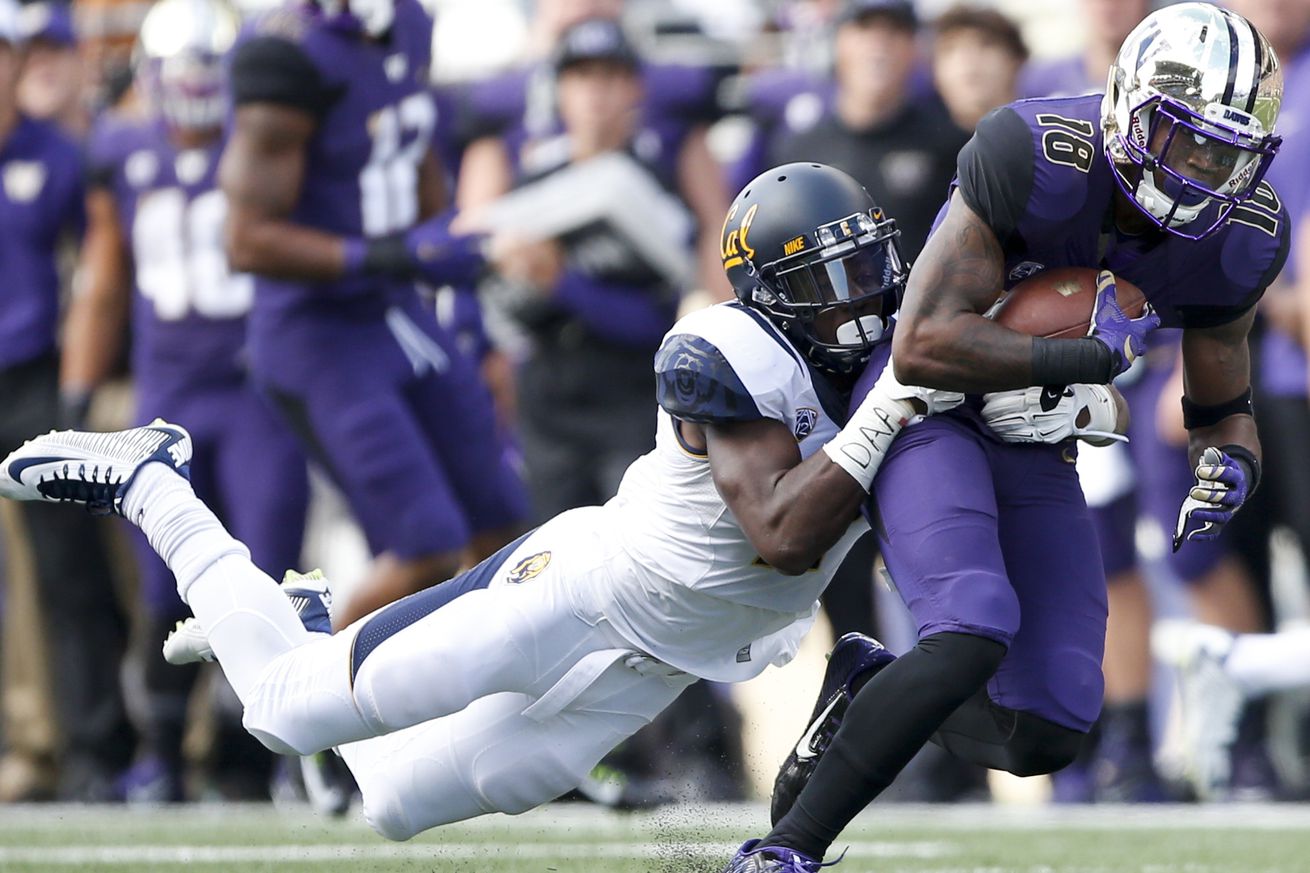 CB Darius Allensworth is the leader of the Cal secondary

In this space last year, I hypothesized that the Cal defense would take a step forward from "horrific" to simply "very bad".  If you recall, I used some photographs of not-so-cute dogs to emphasize this point.  My observation was that there was the inherent talent in the linebacking corps to provide just enough juice to compensate for the other units and to give Cal's offense a chance to outscore most PAC 12 opponents.  Fast forward to 2016 and things don't look so good. The linebacking corps is suffering huge defections this year.  Star Jalen Jefferson has graduated.  Leading tackler Hardy Nickerson has transferred.  Ditto key reserve Michael Barton.  It's going to be pretty much a whole new unit this year.  The Bears only start two linebackers along with a pass rush specialist.  Junior Devante Downs - 29 tackles last year - is almost a sure thing in one of those spots after having started one game in 2015.  Senior DaVante Wilson is a 265lb DE who plays a role similar to Hau'oli Kikaha a couple of years ago and remains a player that Cal fans think could still really break out.  The rest of the unit is up for grabs. Guys like Alisea Tongivala, Raymond Davis and Hamilton Anoa'i are names you are going to hear as major contributors, but this is a thin group.

Also hurting is the Cal defensive line.  Per Cal Golden Blogs, Cal is facing the prospect of replacing 21 starts in 2016.  These include stars Kyle Kragen and Todd Barr (11 of Cal's 28 sacks in 2015) not to mention their best interior guy in Mustafa Jalil.  Former Vanderbilt transfer James Looney presents as the best returning starter as a DT, but remains a guy who has always been more potential than production.  Reshirt freshman Russell Ude, a 265 lb DE who might end up as a DT, is an interesting talent that we'll hear from this fall.  Still, this unit as a major challenge for DC Art Kauffman.  While there are bodies to throw at the problem, none of them are particularly big or fast.  They are going to really struggle controlling a PAC 12 line of scrimmage.

There is some hope in the Cal secondary despite the losses of starters CB Darius White and S Stefan McClure.  Fellow starters CB Darius Allensworth, NB Cameron Walker and S Damariay Drew are all legitimate PAC 12 talents even if not necessarily stars with Allensworth probably ranking as the best player on the entire defense.  Beyond those guys, however, questions emerge.  Former QB turned safety turned back to QB Luke Rubenzer looks like he will again move back to the defense.  Senior Griffin Piatt will give Cal some good reps. Younger guys like freshman Antoine Albert, sophomore Trey Turner, Evan Rambo and Khari Vanderbilt could each compete for starting roles.

It is unwise to overstate the impressiveness of a spring game performance, but true freshman WR Melquise Stovall really made a statement in Cal's.  As an early enrollee, Stovall was simply supposed to show up and get a lay of the land over the course of 15 practices.  He wrapped up the spring by being the best offensive player on the field with 7 catches and 128 yards in the exhibition.  Stovall is a smaller receiver who shows great cutting ability and good hands.  He isn't exactly a tackle-breaker, but it may not matter if opponents can't get their hands on him.  Given his fast start this spring, the emergence of a strong-armed QB like Webb as a possible starter and the opportunity presented with the overhaul of the Cal receiver corps, it is easy to see why the stars are aligning in favor of Stovall emerging as the breakout star for the Bears in 2016.

2016 is going to be a defining season for Cal head coach Sonny Dykes.  By all accounts, Dykes is a great guy and an honorable head coach.  But questions about his performance on the field remain.  While it cannot be denied that he has Cal on an upward trajectory, much of that success has been tied specifically to the growth of Jared Goff with very little evidence of growth / maturation in most of the other position groups.  With Goff now gone, we will be interested to see if Dykes can coax enough improvements out of the rushing attack, the pass rush and his nickel-oriented, bend-don't-break defense to compensate.

He'll have to do so with a schedule that provides him some opportunity but won't be easy.  The non-conference slate opens up at home against Hawaii, travels to San Diego State and then hosts Texas.  Not the easiest slate for a team looking to break in a new passing attack, pass rush and linebacking corps.  The good news is that the toughest part of the schedule comes at the end of the season.  The bad news is that the stretch is a killer with Oregon, USC and Washington all coming back to back to back in one three game stretch.

If I had to make some bets, I'd wager that Cal's offense bounces back faster and better than many people might expect.  It really is a good rushing attack and that offensive line could become the surprise unit for the year.  I also happen to think that Davis Webb is a "real deal" kind of contributor given his experience with a similar system and I think that he is good enough to elevate some of those young, new receivers.

I'm less optimistic about the defense.  They simply don't pass the eyeball test and they seem to lack depth at both the linebacking and defensive line levels.  A lack of depth equals a lack of competition on a team that is competing in a division that features some very physical (Stanford, UW) and very wide open (WSU, Oregon) offenses.

With all apologies to Cal fans, I'm not seeing it.  I expect Cal to be the "big faller" in the PAC in 2016.  This looks like a defense that is going to give up at least 35 points a game, a level that the offense won't be able to consistently compensate for.  In addition, their out of conference season looks like it might contain one if not two losses.  Summed up, it is hard for me to see how Cal gets over the five win mark and into a bowl game.  That kind of step back is going to be an issue for Cal fans who are growing impatient and could result in Dykes shooting up the dreaded "hot seat" list by the end of the season.