Dominic Green is here to shoot, what could he become?

Share All sharing options for: Dominic Green is here to shoot, what could he become?

Dominic Green fell to one or more of the potential pitfalls for a shooter. He was brought in to Washington to do one thing: shoot the basketball. His three-point percentage was a team-worst 27.7 percent (ignoring Devenir Duruisseau, Noah Dickerson and Malik Dime's combined four attempts). Green's stroke is solid and there isn't a lot of wasted movement. He doesn't have much knee bend but he gets enough lift that it isn't much of an issue, if it even is one at all.

This is the second entry into the "What can he become" series where I examine what the ceiling and floor is for the young Huskies. First up was David Crisp.

Green's shooting is going to improve. He is going to add some weight and not be a complete sieve on defense (probably). His defense wasn't worse than his shooting percentage, though it wasn't much better either. He doesn't have the athleticism that CJ Wilcox had to develop into a serviceable and then average defender just via progression and maturity. That could just not develop like we have seen with Donaven Dorsey, whose own progression (spoiler alert) has left much to be desired.

He could never grow comfortable in this offense. He could continue as a one-trick pony whose trick is clearing the hurdle one out of four times. Typically that horse would break its leg and be put down transfer to a smaller school. A player has to have more than one skill to be successful unless that skill is elite. His skill isn't elite and it could not develop that way at all.

He was never lauded for his athleticism, and his lithe frame doesn't allow him to use physicality to make up for his slenderness. Though his arms may be long, he struggles to use them to disrupt passing lanes and to deny the ball. His effort is there, but it didn't show on the stat sheet (0.5 steals per 40 minutes, last among all scholarship players) nor did it show on the eye test.

Green really could struggle, and what we have seen out of Dorsey is the likely worst-case scenario. He could have to battle for each and every minute because the reason for him to see the floor isn't showing up when he does reach the floor.

What could David Crisp become? 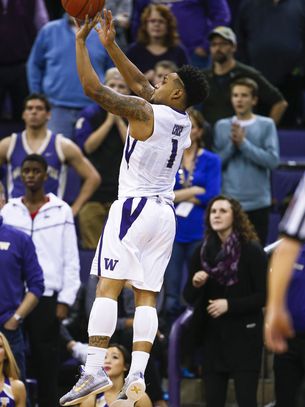 David Crisp has the largest gap between his ceiling and floor of any current Husky, we analyze.

His trigger is quick. Quick, efficient, and very much can be deadly. A shooter is a shooter. It can take time to get acclimated to a new system, teammates, and to an entirely new level of competition. Green has had that year. Now it's time for him to catch fire.

Like was mentioned by my glass-half-empty other half, he doesn't have the athleticism that CJ Wilcox had, so he won't be the target of backdoor lobs and isn't going to be the guy to take it off the bounce into the defense. He is long, has good effort defensively, and very well could be a deadeye shooter.

Freshman Dominic Green was asked to sit in the corner while catching-and-shooting. The most creativity he showed was a pump fake followed by a one-dribble mid-range pull-up jumper. He had two shot attempts at the rim all season long. That's how many fingers Gerlon Two-Fingers has.  That's over the course of an entire season. So, that's going to get better, because he already can score on a one-dribble pull-up so his next step is getting all the way to the cup.

Defensively, very few questioned his effort, only his ability. Green doesn't have strong agility, but long limbs can make up for that to a point. He isn't going to be a lockdown perimeter defender, but will have the ability to slow opposing wings and won't need to be hidden in the corner of zone defenses.

An elite shooter picks up an entire club by navigating screens and drawing attention off the ball. Lorenzo Romar knows how to draw up plays to get a shooter looks, or at the very least has had a lot of practice with it. Green will be the beneficiary of that, and that trickle-down will go to his teammates. He will space the floor and allow for it to be four-on-four unless the opposing team wants to give up three points per possession.

Green potentially has an elite skill but is limited. If he puts in the same effort off the court as he does on, he will turn out to be a fine player. He won't ever be a star, but he will get some playing time thanks to the insatiable need for shooting. By the time he reaches his senior year he will have developed into an average to slightly above-average defender thanks to positioning, length, and effort.

The biggest question is whether or not he can rectify his shooting woes. Are his issues mental? If they are, how can he overcome that? Marquese Chriss was working with a sports psychologist last season to get his emotions and fouls under control. Could Green receive benefit from that? I don't know how, but the outside shooting for Green is going to improve. He will be around a 40-percent shooter from beyond the arc, though he won't ever carry much volume.

I doubt there is a season where Green averages more than 12 points per game and would be pleasantly surprised if he tops 10 at any point. There are too many limitations that he needs to get past before he can get enough run to score more than that.

How do you think Green's career is going to go?

What could a UW pup grow into? Looking at the floor and ceiling of each young Husky