Defense vs. Eastern - press coverage and pass rush, what do the numbers tell us?

Should the gray-hairs always on about "attack-style defense in the James-Lambright era" just shut up already? Or do they have a point?

Share All sharing options for: Defense vs. Eastern - press coverage and pass rush, what do the numbers tell us?

There's been a lot of talk about the Huskies' soft defense against Eastern, and whether a lack of aggressive tactics was part of the problem with the pass defense.  The consensus seems to be that the Dawgs ought to play press coverage more.  I've evaluated the game to see if this is true.

I tabulated each pass-play the Dawgs defended, noting whether they ran press or off coverage, and whether they rushed three, four, or blitzed.  Then I calculated the results in terms of Expected Points Added.  EPA is a measure of how many points an average offense is expected to get from a given down and distance on a given yard line.  For example, second and five from your own 40 has an expected points score of 1.27.  First and ten from the 15 yard line has an expected points score of 4.39.

To evaluate a defense, you can take the difference in expected points for each play.  So if your defense gives up a big play on second and five from the opponent's 40, resulting in first and ten from your own 15, that play has an EPA of 4.39-1.27=3.12.  A very bad play for the defense.  On the other hand, if that second and five play resulting in a ten-yard sack, the EPA would have been -1.73.  A very good play for the defense.  (Defense wants low EPA.)

The table below shows a breakdown of all the defensive combinations. 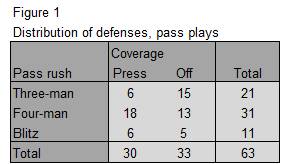 As you can see, the Dawgs were actually about 50/50 between press and off coverage.  They did run a lot of three-man rush -- nearly half the plays.

The next table shows the average EPA for each combination of coverage and pass rush. 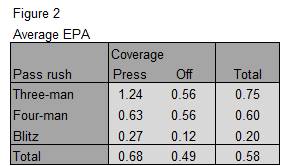 Two things really jump out at me.  First, running press coverage with a three-man rush is by far the worst combination.  Fortunately, the coaches seem to agree: they ran this combination only six times.  Second, blitzing appears to be effective.  The average EPA with a blitz is better than any other pass rush, for either press or off coverage.  Third (in my list of two), blitzing with off coverage has the lowest (i.e., best) average EPA of any combination, yet is was the most rare -- only five times throughout the game.  Interesting.

A few caveats before we go any farther.  This is a teeny-tiny sample size.  You wouldn't want to conclude anything too firmly based on this .  In fact, none of these results are statistically significant (Chi-square test or t-test in multiple regression, for the math geeks).  Let's just say it lays the foundation for an interesting discussion, and presents the basis for a tentative case: namely, it looks like the Dawgs should blitz more.  And it looks like they should think about playing soft coverage when they do.

Brad and I have talked for a while that defenses should take on a high-risk strategy: go for broke, take risks, but don't get left on the field for a 15-play drive.  This strategy suggests another way to evaluate the performance of our six defensive combinations of pass rush and coverage: which combinations are best at preventing a first down?

According to the expected points tabulations, an offense needs about 0.6 points to get a first down.  Notice that the average EPA for every defensive combination (except blitz-off) would result in a first down or better after three average plays.  For example, if you play off coverage with a four-man rush, the offense will on average get 0.56 points on first down, then get a first down on second down.

This means that an important feature of a defense is how likely it is to produce a below average play for the offense.  Imagine a defense that gave up six points on 10% of plays, and zero points the other 90%.  The average EPA for this defense would be 0.63 -- in the range of our defenses in Figure 2.  But it would be a pretty good defense: it would give up a touchdown on less than a third of possessions.  Compare it to a defense that gives up 0.63 points on every play: it would never get a stop.  Defense should want high variance for a given average result.

The charts below show the ranges of EPA for the combinations of coverage and pass rush.  They are basically the "percentiles" of EPA for each defense.  For example, in Chart 1 we see that press coverage ranged from a -1.8 EPA (the best play) to 4.4 EPA (the first touchdown pass).  Off coverage combined with a blitz never had a play above 0.75 EPA, as seen in Chart 4. 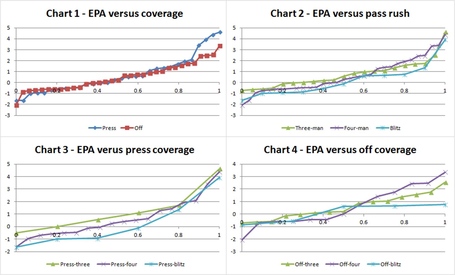 Based on these figures, we can calculate the probability that a defense running one of these schemes will hold its opponent below 0.6 EPA for three straight downs, i.e., that it will end a drive, given that the results of each play are randomly drawn from the ranges in the charts above.  The results of this are shown in Figure 3 below.

This is pretty interesting.  The combination of defensive calls that is most likely to create a stop is press coverage with a blitz -- exactly what certain Husky fans have been saying!  This is true even though press-blitz has a worse average per-play result than off-blitz.  Huh.  How about that.  To see why this is true, compare the light blue "blitz" lines in Charts 3 and 4 above.  Chart 3 shows the range of results for blitz combined with press coverage; Chart 4 shows the range of results for blitz combined with off coverage.  Although the average height of the curve in Chart 3 is higher, and although the peak (i.e., worst play) is much higher, blitz-press defense is more "scooped" -- meaning more plays are below that 0.2 points needed  per play to get a first down.

Just to reiterate, this sample size is way, way too small to conclude anything.  But I think it does offer a tiny bit of support to Dawg fans who get all weepy for Lambright's defenses in the early 1990s.