The Men's soccer team suffered their first loss yesterday, but it wasn't for lack of trying.

Washington hosted the St. Mary's Gaels yesterday. The Gaels came into the game at 0-2, having yet to find a win on the season. At the half, the game was scoreless.

When the second half started, the Huskies literally came out guns blazing. They hit paydirt three minuted into the second half on a pretty pass from Darwin Jones to a wide open Mason Robertson, who blasted a first-touch into the back of the net. It was Robertson's first goal of the season, ans 7th of his career.

The barrage continued, but the St.Mary's keeper just kept on stopping  everything that came his way. The Gael's were able to score the equalizer, and put the game into overtime. In overtime, the Gael's made it count on a counterattack. Michael Semenza hit a nice through ball and hit his teammate, who happened to be wide open in front of the goal.

The Huskies outshot the Gaels 33-8, but they couldn't find the back of the net to save their lives. Darwin Jones' assist put him at 8 points on the season, a team high.

Breakdown of the Lone Husky Goal

This goal was yet another goal that was set up because of Darwin's Jones' sheer athleticism, and his ability to score. If you watch Husky Soccer at all, this is something you'll see all season long. Jones is able to draw multiple defenders to him, simply because he's Darwin Jones.

The play starts with a nice pass from the side of the box by Josh Heard. He hits Jones with a sharp pass that is just out of the defender's reach. 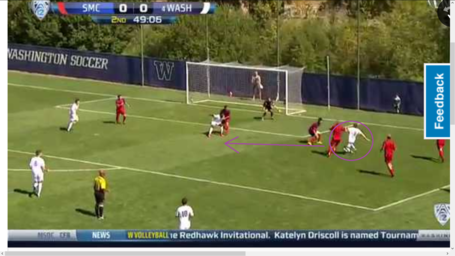 Jones gets the ball in a three on two. He's going to try and get both of the outside defenders to come to him so he can get his teammate, Robertson, an open look at the goal. 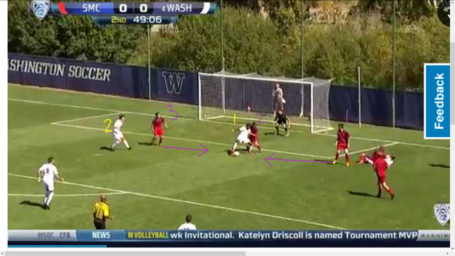 Jones gets the ball and dribbles once with his right foot, drawing in defender 1, and freezing defender 3. Both guys know that Jones can score, so they choose to collapse on him. While defender 3 is frozen, Robertson (#2) is slowly stepping back to open himself up for a clean shot. 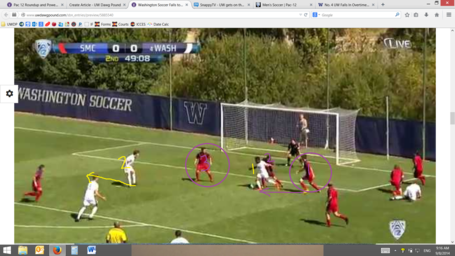 At this point Jones has hit his pass with his right foot, as soon as defender 3 began to close in on him. 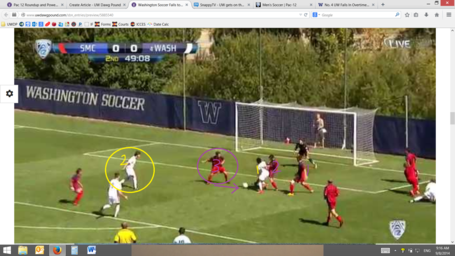 Robertson gets the pass and slams the ball home.

Darwin Jones is a great striker, but what really makes him special is his ability to use his athleticism to make things happen for his teammates. But, the best part is, someday soon, this guy's going to be wearing Rave Green.

The Huskies will be playing on Friday, September 12, when the UCON Huskies come to town. The game will be broadcast on Pac-12 Washington, with first touch at 7:30 p.m. Pacific Time.