Though Washington walked away (definitely didn't run, sprint or skip away) with the win on Saturday, there were a lot of things that just didn't work out well. The run defense wasn't quite up to par, and the non-physical off coverage allowed short throws to be completed with relative ease. Jeff Lindquist underwhelmed as the biggest disappointment of the evening. I'm sure you all know his stats outside of his admittedly awesome deep bomb that is the second-longest pass play in Washington history.

The recipient of that deep bomb was John Ross, and he was the definite star of the night, scoring both of Washington's touchdowns in highlight fashion. He had flashes of explosion in his freshman season, culminating in his kickoff return against BYU in the Fight Hunger Bowl. Now, we get the chance to see that explosion on a more consistent basis, with both of his touchdowns serving as showcases of his unique explosiveness. Have you gotten the message of explosive?

I don't get CBS Sports Network, and wasn't able to rewatch the game to find tendencies to break down (unlike hawksfordays, click that link). Now, what I was able to do was find highlights. John Ross is something of a highlight reel in purple. He took his first touch from scrimmage to the house, and he scored the aforementioned 91-yard touchdown from Lindquist. It only made sense that that he was featured heavily in the short highlight reel put together by the Pac-12 Networks.

So, the plays to break down would be the bomb or the reverse. I can break the bomb down really quick:

John Ross is faster than anyone. That is seriously it. He just outran everybody. Even the deep safety lined up off-screen got lost in his dust. That sort of speed is going to provide a heck of a lot of cushion for short and intermediate passing, as well as open up some running lanes.

Not only does that speed stretch the defense vertically, but it also will force the defense to defend sideline-to-sideline, with fly sweeps, end arounds, bubble screens and reverses, like this one.

The Hawaii defense had been extremely aggressive on run plays, and this playcall was intended to take advantage of that. It worked, obviously.

UW started in 21 personnel. Deontae Cooper is lined up behind Lindquist in the pistol with Josh Perkins flanking Lindquist to his left, the strong side of the formation after Michael Hartvigson motioned right to left (not featured in the highlight, but his posture seems to indicate it).

DiAndre Campbell is on the bottom of the of the screen on the hash, Ross up top outside the numbers. This gives him the most open space on the opposite side of the field to use his best asset, his speed.

Side note: interesting thing to watch this season: the use of Perkins as a blocker, after being viewed mostly as a move/joker TE.

Everybody crashes on the ball, if this were a real strong-side run, then it wouldn't have come close to working. Cooper is actually being tackled as he pitches the ball to Ross, who is on his way around the back fo the formation. The corner originally tasked with covering Ross struggled to sift through the trash where most of the play was occurring. He was also the only one who kept track of Ross on the play, aside from the weakside corner and probably the deep safety, off screen.

The weakside linebacker is assignment correct, preventing a cutback lane, until just the wrong moment, and gets caught completely outside the play. The left corner is about the only one in position to make a play against two offensive linemen leading the way, and you could only imagine how that ends up. The camera zooms in on Ross too closely to see what happens, but both the corner and the deep safety are taken care of by Campbell alongside two beefy linemen. It wasn't a fair match up.

Oh, and Lindquist tried to lead block for John Ross. 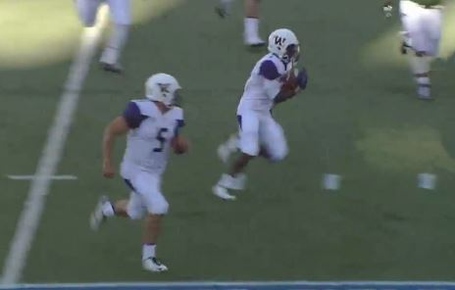 Someone is a quarterback and someone is the most explosive player in the conference.