Is everybody looking at that fake punt versus Stanford the right way? Myths versus facts

Update: coach's name spelled correctly now.  What kind of amateur-hour are we running around here, anyway?

The Husky coaches are taking a lot of heat for the fake punt in the fourth quarter against Stanford. Do they deserve it? Sort of. Let’s do some fact-checking.

Statement: The decision not to punt was bad, an obvious mistake, and Coach Petersen was right to wish he had it back.

As savvy football fans know, the statistics say you should go for it on fourth down more than most teams do. A lot more. The case can be made that this was one of those times. Shall we look?

The figure below shows the optimal strategy from Advanced Football Analytics. If you look up the distance and yard line (our own 47, fourth and nine), you see that the chart says you should punt.  Not close. 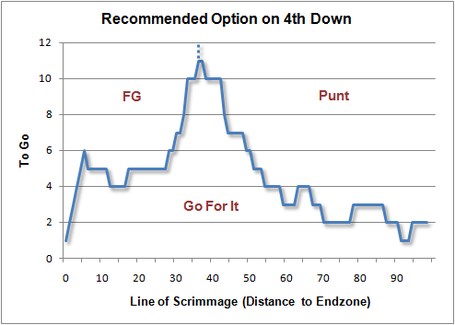 That chart is based on Expected Points Added. It calculates the risk/reward of punting versus going for it based on how many points you expect the drive to result in – for you or for your opponent if you turn it over. However, by the time you’re late in the game, there’s another, better metric to use: win probability. Advanced Football Analytics also has a fourth down win-probability calculator that… calculates win probability. (If you can imagine.) You plug in the score differential, time remaining, distance, and the yard line, and it tells you how likely you are to win if you go for it, if you punt, or if you kick a field goal.

The next figure shows what happens if you put in the numbers for our play: tie game, 8 minutes left in the fourth quarter, our own 47, nine yards to go. Deciding to go for it reduces your chance of winning by five percentage points.  This is less than the difference between receiving and kicking to start the second half of a tie game. 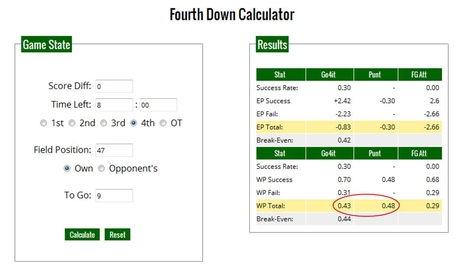 There are lots of reasons not to attach too much faith to the precision of these numbers, as pointed out by Kirk in a comment somewhere (in which I misstated the WP, by the way): they’re based on NFL stats, they don’t take into account Washington's struggles on offense, their success on defense, the day their punter was having, and so on.

I conclude that the decision was by-the-book wrong, but reasonable people can disagree about it.  It wasn't outrageous.

Status: Fact, in a myth-like sense of the word.

It seems clear in retrospect that going for it via a fake punt was a dumb: it didn’t work. And comments from Shaq Thompson after the game suggest that Stanford saw it coming and it should have been called off. Certainly the way Stanford lined up didn’t make it look too likely.  However, when Coach Petersen made the call, he didn’t know those things. He had to make his decision prospectively, and we are evaluating it retrospectively. Since going for it on fourth down was bad but not outrageous, I posit it’s reasonable to go for it via fake punt. However, it’s also reasonable to ask whether some other, regular play would have had a higher likelihood of success.

Statement: The real problem was what led up to the fourth down.

If Coaches Petersen and Smith knew they were going for it on fourth down, they should have called different plays on downs one through three. The actual plays were two passes and a run by Miles (can anyone remember if that was a scramble or called run?). And, most disastrously, there was that a delay of game penalty. But all the Dawgs needed was 2.5 yards per play. Even three average rushes of 2.1 yards, if we’d gone power-right, read-option, power-right, would have given us fourth and four – the delay of game would have been unlikely. That would have made fourth down a go-for-it situation whether you look at it via expected points or win probability. Furthermore, our average rush was better than 2.1 yards, since there were 40 yards in sacks skewing that average.

Conclusion: The coaches are taking too much heat for the wrong things and not enough for the larger tactical mistakes they made.