The Brotherhood Peers Into the Future

Bad (bad) blood (blood), brother, you've been deceived. It's bound to change your mind about all you believe

Share All sharing options for: The Brotherhood Peers Into the Future

Do you want to talk about Georgia State?  Me neither.

We're heading into Pac-12 play now, so I want to talk projections for the season overall.  The Pac-12 is tough, and although the Huskies' trend seems to be upward over the past five years or so, it's hard to get from five wins to six to seven.  You have to start being better than some really good teams.  Are The Dawgs going to be favored against UCLA at home?  ASU?  Should they beat Arizona on the road?

I put together the table below, which estimates the point-spread at the implied win probability for the whole season.  Seem reasonable? 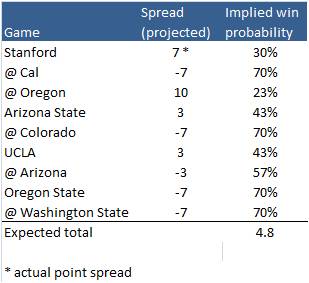 If you add up all the win probabilities, you get the expected win total for the year: 4.8 wins.  I know another 5-4 conference record is now what Dawg fans want to see, but I wonder if you disagree that it's the most likely outcome, from a hard-headed perspective.  The implication is that we'll steal one from Stanford, Oregon, ASU, or UCLA, and drop one against the remainder.

The question for Dawgs might be, What's the chance that we'll get that sixth or seventh win?  To estimate that, you could treat each game as a random event, like a coin flip with, say, a 70% chance of heads and a 30% chance of tails.  That would give the chance of six wins by randomness.  But there's a bigger effect at work, here.

There are ways the Dawgs can beat Stanford: they could get lucky and upset a better team; or it could be that the Huskies are actually better than seven-point underdogs to Stanford.  Maybe they're actually better than Vegas thinks.  The implication of this is that wins and losses are correlated: if the Huskies beat Stanford, it's actually more likely that they'll beat everybody else on their schedule, because there's a chance we just learned that they're a better team than we thought.  (Another thing that might cause correlation, besides the underlying "goodness" of the team is injuries.  If Danny Shelton gets hurt, we're more likely to lose to Stanford, and everybody else on the schedule until he returns.)

This is really a math-y way of saying what Dawg fans have probably noticed.  The team can play really well, as they have at times.  Or they can play really badly, as they also have.  If it's just luck of the draw which Husky team shows up, then the season is random.  But there's a good chance the Huskies will settle into one or the other persona.  If it's the good Husky team, they're likely to win more than five games.  If it's the bad one... well.

Using a very scientific and technical process that is far too complicated to explain to you, Brad, I've estimated that one quarter of the variation in the Dawg's Pac-12 record will be due to uncertainty about just how good the team actually is.  The graph below shows the probability of various win-totals based on this estimate. 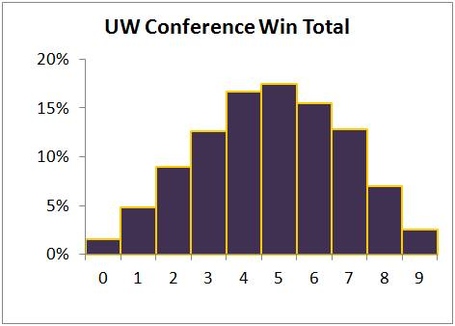 Does that sound right?  Would you bet the power tools you're planning to inherit when Dad finally... well, you know -- would you bet those at 3/2 odds on a six-win season?

We have talked since the Hawaii game about the offensive line and their struggles.  I'm on record as basically being a Steve Sarkisian fan -- I think he reversed the decline and brought the team back to respectability.  The one area that he really seems to have struggled was in getting or developing (which?) offensive linemen.  We don't have any All-Pac-12 candidates out there.  Well, I actually think Micah Hatchie has played pretty well, but you take my point.  The reasons for that have been discussed to death, speculated to death, actually, and I have nothing to add here.  However, under his time here I thought we did see a difference in the basic shape of our Offensive linemen.  A little more athletic, a little less squishy.  That is gone.

The Dawgs have run a lot of power-runs so far, which requires linemen, usually a guard, to pull -- run from one side of the formation to the other to block at the hole.  This as opposed to zone blocking, where the line moves more or less in unison, blocking the guys in front of them.  (See these great descriptions of power and zone blocking, found by RedmondLonghorn in what is possibly the greatest post ever at UWDawgPound :

Stanford runs a lot of power -- it's their bread-and-butter.  This is what Stanford's offensive line looks like.  The Huskies' line doesn't necessarily have that same look.

Brad mounts a comeback in the second half, and throws up a Hail Mary...

Yeah, no.  There's just nothing to take from that game that's actually worthwhile moving forward, save the fact that I really liked what Petersen had to say after the game.  He didn't sugarcoat anything, he didn't blow smoke, and he agreed with the assessment that even though the second half was aesthetically better, it didn't really take the stink off the game.  I think most of what he said was for the benefit of the team instead of the media, and without naming names, he pretty much called them out.

So, I double-checked your math, and it's correct.  Gold star.  But assigning probabilities today is a lot like a preseason poll.  You're using flawed data to try to come to a concrete conclusion.  I get that you're doing your best to try and be objective, but you also have some pretty strong biases that I doubt you're able to overcome (mostly against ASU and UCLA, as you've made clear on many occasions).  If I asked you on August 29th what you thought the Huskies would do in conference, you'd probably say five wins.  And viola, you've got a data set created by you that shows that.

I agree with your overriding points - it's harder to get to 6 wins than 5, and 7 than 6.  And that we don't really know how good the team is right now.  Even if I accept that 25% of the variation is due to that, and I do, there's still a significant randomness factor involved.  When Chris Petersen was hired, I would've guessed randomness would've played less a factor than it did under Steve Sarkisian.  At this point, I'm not sure that's the case.

It's less a question of where they will (or might) finish than where they should finish.  I wonder what your data set would've looked like if Steve Sarkisian was still the coach, even if the non-conference games had played out the same way they did.  That's not to suggest that you think Sarkisian is a better coach than Petersen.  I'd be willing to bet you'd say Petersen is better.  But your biases would be different.

You can have Dad's power tools.  If you want, I'll have my wife come over and show you how to use them.

The line....It's easy to rehash what we've seen go wrong.  I wish somebody had an answer why.  It seems like there was a three or four year effort to get them to look and play a certain way, and like you said, we've now had about 9 months of undoing most of that.  The easiest answer is likely to recruit world-beating players at those five positions.  Stanford has done some of that recently.  But man, they've done a great job of taking guys that were mostly evaluated similarly to the UW's (as judged by other offers guys like Jonathon Martin, David Yankey, Cameron Flemming, etc.) had and turning them into tremendous players.  It's tough to know how much of the development is technical and how much is just strength and conditioning.  They guys in that picture all look a lot more physically imposing than anybody the Huskies' have put on the field the last several years.  But they also look a lot more like they know what they're doing as well.  I wonder how much of the latter is due to a pretty straightforward scheme.  I'm not sure how it gets better.  Even less sure when.

It's good to see that Petersen and Jonathon Smith realized pretty quickly that zone blocking concepts weren't going to be the most effective with the backs they have.

Redmond's post was simply awesome.  Stanford runs a lot of counter as well.  The articles Redmond linked on that should be required reading for this Saturday.