Ben takes a look at the tape to see how Shaq Thompson won a whole bunch of defensive player of the week awards.

Two weeks in, I'm not quite sure what this column is going to be. I don't know if it is going to be a spot where we talk about schemes and philosophy, along with how players fit within that scheme, or if it going to be a spot to highlight one play or multiple plays within a game, broken down in detail. I have done both, so far.

This week, it will be a spotlight on two plays, two highlight and top of the Pac plays made by someone who just may be coming into their own as a Husky: Shaq Thompson. Thompson has always shown more physical gifts than anyone on the defense. He has speed, he has agility and he has size. He has all of those in spades and hearts and clubs. Those physical gifts are the reason he was a top-five recruit in the entire country. Those physical gifts are why he was given a series at running back against Eastern Washington.

Up until last week, we had been waiting to see Shaq really break out. He had struggled a bit so far this season - on defense- not quite flashing the physical prowess aside from when he was laying lumber on receivers daring to cross the middle of the field or meet him on the sideline. From football practice in school I still remember running what we called the corner drill. Both players run at opposite angles towards the sideline. One has the football and the other doesn't. It was basically the defender's chance to hit someone as hard as they wanted. I never would want to run this drill with Shaq being the defender.

Anyways, we have been waiting for Thompson to put together a complete game where he put together all of the physical talent he has flashed. That game finally came, at the expense of Illinois.

The first defensive touchdown of the game was basically gift wrapped to Thompson. Let's go through what happened on the play.

The Illini start in a balanced 2x2 set with a running back to Wes Lunt's right. Washington counters in base 4-3 , though with Thompson as a slot corner it could be considered a nickel defense. The corners are in off coverage, and who I believe is Travis Feeney is walked out to the slot corner.

Here are the routes the Illini receivers are running: 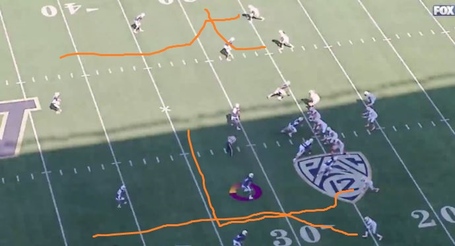 The running back also releases to the flat.

What it appears is that the outside receiver is going to try and clear out Shaq and leave an open space for the slot receiver to pick up nine yards and the first down. Shaq doesn't bite, and drops straight back into his zone. Travell Dixon handles a buzz zone on the outside while Thompson mans a hook. He doesn't take his eyes off of the quarterback the entire way.

(the purple is not me, but the Pac-12 Networks)

For whatever reason Lunt just doesn't see that Thompson hasn't turn and run with the outside receiver who made his way in front of the slot receiver, and throws the pass as soon as his slot receiver breaks back inside, where Shaq is lying in wait. It may have been the pocket collapsing a little bit on Lunt, who had to shuffle his feet a little bit, or it may have just been a misread of the coverage.

I can't tell for certain the coverage the Huskies are using. The open side of the field is bare bones cover three. The OLB lined up in the slot follows the receiver to the flat then passes him off. The corner on that side of the field drops back into a deep third coverage. John Timu drops back into a hook zone alongside Shaq, and the free safety (probably Budda Baker) patrols the middle third.

Play side, Travell Dixon drops into a buzz zone, while Kevin King provides help over the top between the hash and the numbers, covering his deep third.

Veterans of Madden and NCAA Football may recognize the colors.

Whether I can determine the defense is irrelevant: Shaq touchdown.

The second play showed great awareness by Thompson, as well as a great effort from Andrew Hudson and an all-around good job by the back eight to allow Hudson time to make it to the quarterback.

Illinois aligns in a 3x2 formation, strong right. UW counters with a 3-3-5 nickel, and drops eight into coverage. 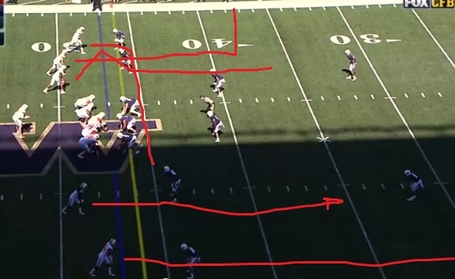 Here, Thompson starts out aligned just outside the hash on the strong side of the formation, ready to drop into another hook zone. Hudson rushes up the field in an attempt to beat the right tackle with a speed rush, when that fails, he spins his way into the pocket, embarassing the tackle, and finds himself directly facing Lunt, who had just stepped up. Lunt attempts to scramble forward, but it doesn't matter, and Hudson strips the ball.

Look at how far from the fumble Thompson begins. Timu and the Illinois wide receiver knock each other out of the way en route to corralling the fumble, allowing for Thompson to come in and scoop the ball up with nothing but green in front of him. 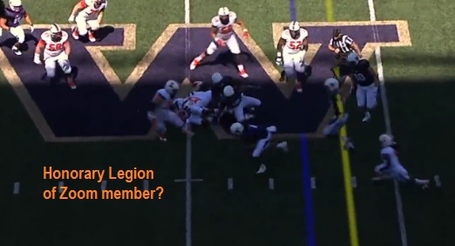 That is how you win a whole bunch of player of the week awards.