The recent news that the SEC Network has struck a deal to be carried on DirecTV has resulted in a renewed focus on the unresolved drama playing out between Larry Scott and the satellite giant. But, is the SEC Network deal a fair benchmark to compare against?

Earlier this week, the SEC announced that it has signed an agreement with DirecTV to broadcast the newly launched SEC Network in its inaugural season (Channel 611 if you are interested in knowing). The announcement itself didn't contain a ton of information, but it is believed that the SEC Network is charging a premium over other college sports networks for both in-market (rumored to be $1.45 per subscriber) and out-of-market subscribers ($0.25 per subscriber). With this contract, the SEC Network has now signed agreements with every single major carrier save Verizon Fios and is expected to reach 92 million households (see Doug Keegan's graphic below). 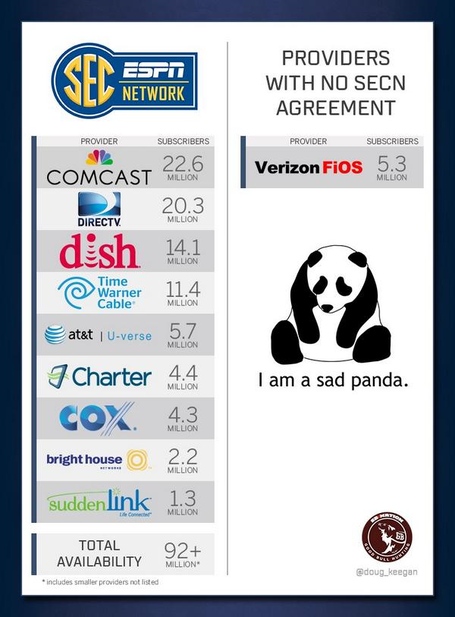 With this deal now in place, the Pac 12 Network is now the only major college sports network to not have a deal in place with DirecTV.  They have never announced the total number of households that the P12 Network reaches, but that number is most assuredly less than half of the reach of the yet-to-be-launched SEC rival.  The success of the SEC Network is surely perceived as a major blow for Pac 12 Commissioner Larry Scott and the new president of Pac 12 Networks, Lydia Murphy-Stephans.

Rewind three seasons ago to when the P12N was just launching. The P12N was able to quickly strike a deal with the top carrier, digital cable behemoth Comcast.  However, Scott and Muphy-Stephans's predecessor were unable to negotiate a full national roll-out to Comcast's 22.6 million subscribers. Due to that blunder, DirecTV, which reaches 20.2 million homes (and is slowly shrinking per their latest financial report filings) had no leverage applied to it to do a deal at the prices that the San Francisco-based Pac 12 Network was looking to get. This stalemate will now go into its third year with no sign that the national cable companies will make the Pac 12 content available nationally or that a deal with DirecTV is imminent.

I have been critical of the performance of the Pac 12 leadership team when it comes to the roll out of their network. In particular, the giving away of digital rights to the cable companies without assuring that they rolled out their programming nationally gave DirecTV a very easy out in their negotiations with Scott and co.  In my view, those rights should have been withheld as an alternative for the P12N to offer nationally in the event the cables or satellites failed to push full coverage.  They squandered those rights.  The resulting bottom line is that there has been no national threat to DirecTV nor leverage applicable to the cables.

It clearly vexes Pac 12 fans as to how such a deal could be struck so quickly between the SEC Network and DirecTV.

If you are following me so far, then you can tell I'm not enamored with the job that the P12N leadership team has done to date.  However, let's be clear here, the signing of a deal between the SEC Network and DirecTV cannot be used as a stick to beat over the head of Larry Scott while you scream "I told you so" at him over and over. Simply stated, the SEC Network is a whole different deal.

To get a better idea of why these situations are like comparing apples and oranges, you have to start with an understanding of the ownership structure for these different networks. The SEC Network is wholly owned by ESPN ergo Disney with the SEC splitting network profits with Disney 50/50. Incidentally, this is the exact same ownership structure that the University of Texas and the Longhorn Network has with ESPN. The Big 10 Network, by contrast, is 51% owned by Fox.  In order to maximize speed to launch, these conferences sacrificed big chunks of their future profits to the media companies.

The Pac 12 Network has chartered its own unique course with its business.  It is a 100% privately funded and owned operation. In fact, it is the only major college sports network that is 100% privately owned. The implication of this strategic choice is that the Pac 12 stands to cash in on its own properties at much higher levels than any of its peer conferences (at least those that have networks) over the long term.  The short-term implication, however,  is that by going it alone, it has less leverage with the major sports networks and carriers.

This point about ownership structure is an important one, and not just because I am the one making it. The Pac 12 absolutely made the right choice to go it alone as a wholly owned network. Some may question that decision, but as a businessman myself, I do not.

Those who would argue this decision would argue a couple of things. First, they'd say that a dollar earned today is worth more than dollar earned tomorrow. True. But a dollar earned tomorrow may be worth more than 50 cents earned today as is the case with the SEC Network. Second, they'd argue that the partnership of the SEC Network with ESPN when ESPN also owns all of the television rights to the College Playoff games will create a benefit for the SEC when it comes to tournament selection and logistics. This is certainly a valid concern and one that I'm sure is on the mind of conference presidents outside of the SEC. But, let's face it, if ESPN were to ever try to exert such influence, even indirectly, it would be an illegal act under current US antitrust laws and could result in doomsday-like penalties for the SEC, the NCAA and Disney. I'm going to guess that "keeping it clean" is going to be a major issue for Disney's / ESPN's lawyers.

Despite this context, it clearly vexes Pac 12 fans as to how such a deal could be struck so quickly between the SEC Network and DirecTV. I would point out a couple of things that may not be obvious on the surface. The first thing is that DirecTV is losing subscribers. In their latest earnings release, they reported a net loss of over 34,000 subscribers. The second thing is that DirecTV is currently negotiating the renewal of several Disney and ESPN properties in addition to the SEC Network. Given that DirecTV cannot afford to be losing subscribers, it is not going to forfeit the chance to lock down major pieces like Disney and ESPN just to take a stand on the SEC Network. Unlike their situation with the Pac 12, DirecTV has no leverage here with Disney/ESPN.

The 'Pound previewed every position group as a lead-in to the Fall camp festivities. Check 'em out.

While the situation looks dire for the P12N, Scott is hoping that his fortunes could soon change. These hopes are pinned to AT&T.  Last May, AT&T announced that they had struck an agreement to purchase DirecTV for $48.5 billion. This deal could be significant in the negotiations between the Pac 12 and DirecTV given that the Pac 12 recently got their own deal with AT&T U-verse. Some have speculated that the "A=B=C" logic may result in a closing of the gap between the Pac 12 and DirecTV.  I must admit, I'm a little skeptical of this logic.  While I won't completely write off the possibility, I'm guessing that the people at the heart of this mega-merger have bigger issues on their collective plate than what to do about the Pac 12 Network. In particular, convincing U.S. regulators in a Democratic-run government that this is good for consumers is no sure bet.

No matter how the situation plays out with AT&T, there is little doubt that the new SEC deal puts new pressure on Larry Scott. The Pac 12 Network is the last major network standing without a true national deal and, as a result, leverage has shifted even more to the DirecTV side of the negotiation. If you want to lay blame at the feet of Larry Scott for overplaying his hand with DirecTV and not negotiating his cable deals well enough, I think that's fair.

However, the fact that the SEC Network signed a deal with DirecTV should not be viewed as evidence of a Pac 12 Networks failure. Their position is very different than that of the SEC Network in terms of ownership and in negotiating leverage. As such, there is nothing that the discerning Pac 12 fan can do but sit back and hope that the AT&T / DirecTV deal gets closed soon.  Maybe you can enjoy a little SEC football in the mean time.