Huskies Film Room: How will Hau'oli Kikaha be used this season?

Kikaha has been compared to a recent Boise State defensive end. Is he going to be used in the same fashion, or will be have a new position with the defense?

Share All sharing options for: Huskies Film Room: How will Hau'oli Kikaha be used this season?

Hau'oli Kikaha wears number eight for the Huskies. Former Boise State defensive end Demarcus Lawrence wore number eight for Broncos last season. The similarities do not stop at the number. Each of them are pass rushers who get by not on elite athleticism, but instead by upper body strength and excellent hand technique. Kikaha's comes from his Judo background, and Lawrence's comes from somewhere, but he has it. This combination of those two attributes allowed Lawrence to overcome his not-elite athleticism to be drafted 36th overall in the 2014 NFL Draft by the Dallas Cowboys. Currently, Kikaha is being looked at in almost the exact same light, with the potential to move up or down based on his production this coming season.

With the skills being almost the exact same, it stands to reason that the nation's leading returning sack artist would be used in a similar fashion to Lawrence in a Pete Kwiatkowski defense. This sort of skillset lends itself towards a strongside rusher role. Typically, a strongside pass rusher won't be dealing with the best pass protectors a team has to offer, and he will be a facing off against right tackles and tight ends. It does require the strength to fight through chip blocks from tight ends and backs releasing into routes as well. This is something that Kikaha definitely possesses.

This is how strong Kikaha is.

He bench pressed a dude. That sort of strength especially will aid in shedding blocks in run support, another reason why he fits more as a strongside end, though he obviously is a very good pass rusher. However, all of this is when it comes to the pro level. We have already seen that he will be playing the BUCK linebacker spot, where he will be asked to cover tight ends and sometimes wide receivers. BUCK linebacker is a spot that is known by different names in different defenses: JACK, RUSH, and probably others. I delved into this last season in my breakdown of 3-4 defenses. Essentially, the primary job is to rush the passer, but also set the edge in run support and sometimes drop into coverage, keeping the defense guessing. He is supposed to be a playmaker, in the words of Kwiatkowski.

It is generally a good idea to ask your best players to make the best plays. This will probably result in less pass rushing opportunities for the senior, but it will allow him to have a wider-spanning effect on the defense.
I do have one concern diversifying his use. As discussed in the Draft Breakdown five gifs article, the biggest strengths for Kikaha are his upper body strength and hand placement/technique. It's not hip flexibility* or lower body explosion, two things that are exceedingly important when it comes to defending in space. Again, he doesn't lack these qualities, they just aren't his strengths. The coaching is the same group that was responsible for the upbringing of the most similar Kikaha comp available, and yet believes that he is able to do more. Kikaha must have really impressed the staff with his abilities to have earned this sort of responsibility.

*He may or may not have weak hip abductors, the muscle that allows you to lift your knee to the side. Weak hip abductors are viewed as a large risk factor when it comes to ACL injuries, and my doctors and physical therapists have told me that it is the most likely reason that I tore mine. With Kikaha having suffered two, it is a possibility.

I took a look at what I could find (first quarter plus highlights) of the time the Huskies matched up against the Broncos, to see how Lawrence was utilized. On the first two plays of the game, he was flipped from the left end (facing the right tackle) to the right end. Now, it would make sense that he followed the tight end and stuck to the strong side of the defense but that wasn't the case. 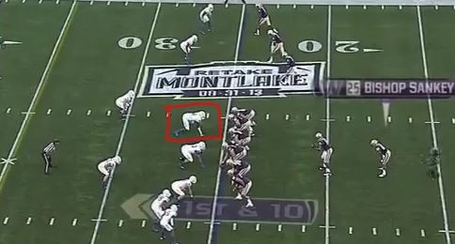 Right away, we see that Lawrence hasn't been defined to one specific role. He has to mix it up in run support on the strong side (though wasn't able to fight through a double on the first play, a 15-yard rush by Sankey in which the nickel corner lost contain and was caught up in the trash behind Lawrence, taken out by Michael Hartvigson after he peeled off of Lawrence).

Lawrence, in the snaps I was able to see, wasn't asked to defend in space like Kikaha will. He was asked to stand up at times, though. He stood out while standing up on one snap, because of his hands on his hips (the offense last season was really good at wearing down defensive ends. Just watch this gif a couple times to get a handle on just how exhausting some packaged plays can be on defensive ends. (First gif I have ever made)

The staff wasn't afraid to use Lawrence in a variety of ways, and now Kikaha is in a similar situation with more responsibilities, but is learning things on the fly in his finial year at UW. it will be interesting to see just how much he is moved around the formation (as an OLB, a lot) and what exactly he is asked to do, along with how often. If I had to gander a guess, I would think that he will be asked to rush the passer most of the time, with him and Cory Littleton bookending the line on third and longs, giving offenses fits with their pressure. The struggle will be finding someone who can provide consistent pressure up the middle to keep tackles from fanning out too quickly. My guess would be JoJo Mathis.

Kikaha himself spoke with CBS Sports' Dane Brugler and discussed his role this coming season:

Q: On last year's game film, you would often rush from a stand up position, but focused on attacking the pocket. This year you will be standing up again, but the role changes. Have you ever played linebacker? Or lined up in space with coverage responsibilities?
A: Last year, I wasn't a primary pass rusher, more of a two-gapper and run stopper. So I'll probably get more opportunities to rush the passer this season, I'll be on the edge more, dropping won't really take away from my pass rush opportunities. And when I drop, I can showcase what I can do. I have to learn from my coaches and step up to the challenge, making plays in the open field.

What are your thoughts on moving Kikaha to OLB, and how is that going to impact the defense?