Observations from the 2nd open practice of Fall Camp, plus a small photo gallery as the UWDP took in the sights on a pleasant late afternoon and evening in Husky Stadium.

Under a slightly overcast sky with temperatures in a much more manageable low-70's range (after record high temperature earlier in the week) the Huskies ran their 2nd open practice of Fall Camp, this one followed by the return of Picture Day after a multi-year absence.  Attendance was modest, with the crowd appearing to be less than 1,000 - likely a result of the mid-week scheduling.

It was a standard practice session filled mostly with positional drills, though they had a few rounds of 11 on 11 work near the start and at the end of practice.  The players were in shells & shorts and the QB's were not live.  The team had an extended series of punt drills, moving down the field and back as Tristan Vizcaino got a chance to show what he could do with a mix of standard punts, roll-out punts and corner kicks.  There was no rush on him so it's hard to really judge his performance, but he showed a nice leg - on one of his roll-out punts he got the ball to turn over and really boomed it.

The 11 on 11 sessions were a mixed-bag as the defense snagged a couple of picks - the first on a tip that was finally corralled by Keishawn Bierria, the other was a nice move by Kevin King to step in front of the receiver.  Both picks came off of Cyler Miles.  Troy Williams and Jeff Lindquist had some nice moments, and Jaydon Mickens and Darrell Daniels really stood out.

From what I could see, the first team OL consisted of LT Micah Hatchie, LG Dexter Charles, C Mike Criste, RG James Atoe and RT Coleman Shelton (Ben Riva was present but didn't practice).  It appeared the Colin Tanigawa got a few reps as well at C.  Dwayne Washington and Lavon Coleman got the bulk of the reps at RB, and the WR group was mainly Mickens, John Ross, Kasen Williams, Kendyl Taylor and DiAndre Campbell.  Daniels and Josh Perkins got most of the TE reps.

I spent a fair amount of time watching the QB drills.  None of the four stood out to me as they all had their good moments mixed with some bad throws.  Miles still has the loopy mechanics and doesn't have the same velocity as the others, but he seemed to have the most accuracy.  Williams has a textbook compact delivery and throws a tight spiral.  K.J. Carta-Samuels is right there with Williams with the strongest arm of the bunch, but he was also the most wild.  Lindquist has a strong arm as well and was probably the next most accurate.  All that said, I don't think any of the QB's separated themselves from the pack today.

When practice wrapped up at 6:30 with a big team huddle in the middle of the field around Chris Petersen, the players and coaches then spread out on the turf and fans were allowed on the field to mingle and take pictures.  They were all very friendly and inviting and really enjoyed interacting with the kids that were there.  I also got a chance to briefly chat with Aaron Williams, father of Kasen and former star WR himself from 1979-1982 - he was very generous with his time and didn't get offended when I noted I had watched him play "way back in the day".  He's a big believer in this coaching staff.

I managed to get a few pictures of the players, and near the end of the session my son finally overcame his shyness around the players and agreed to pose for a few pictures (apologies to Marcus Peters as my picture with my son and him turned out blurry) - here's my collection: 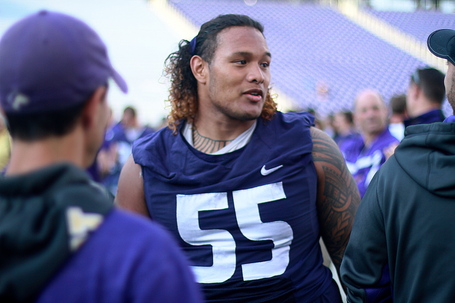 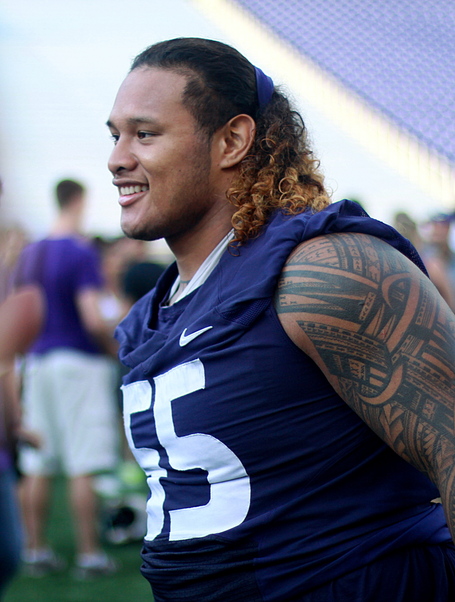 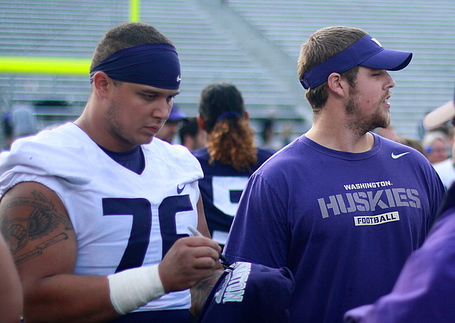 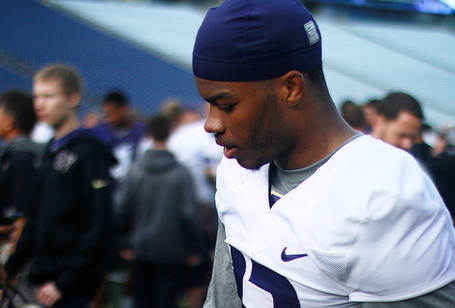 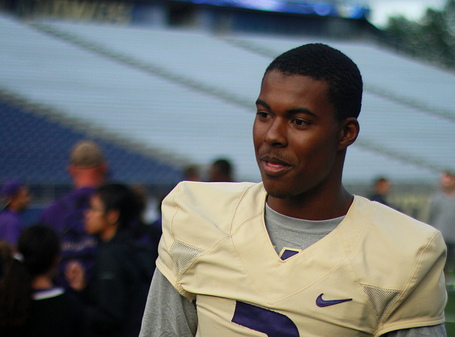 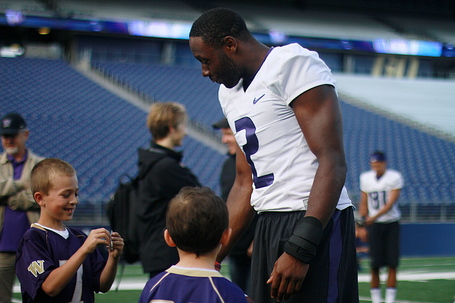 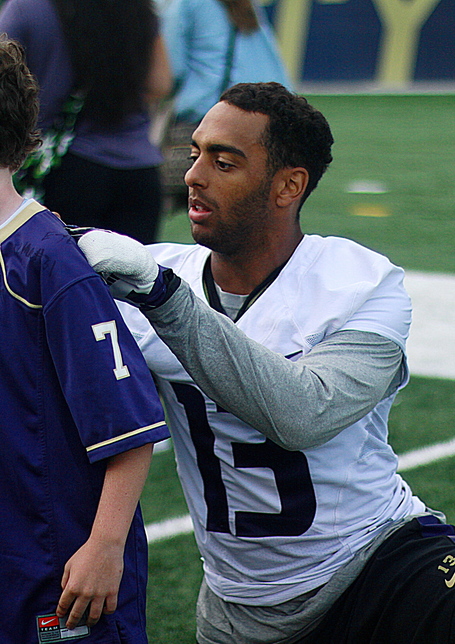 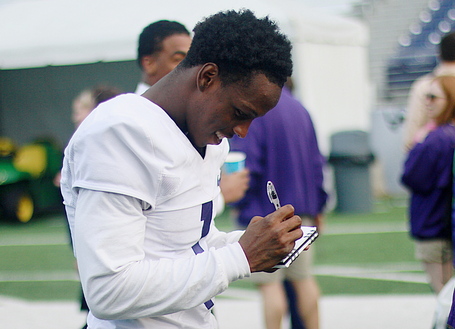 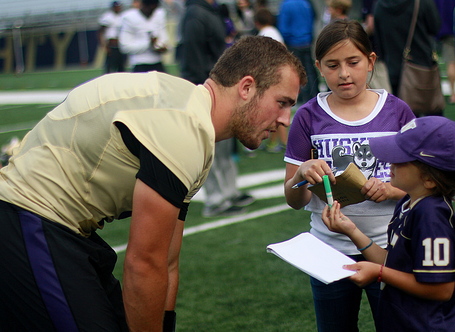 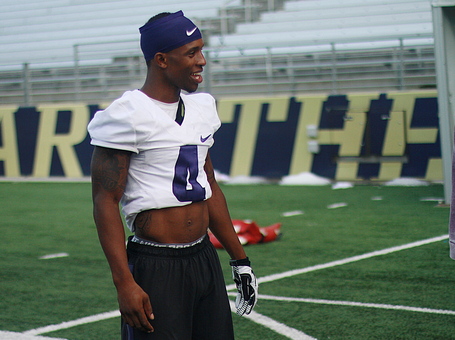 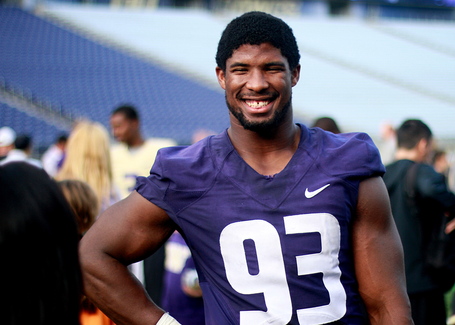 After much cajoling, I finally got my 4-year old son to take a couple of pictures with the players: 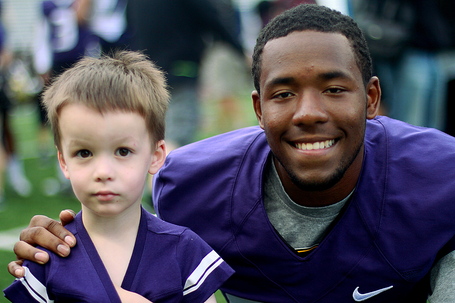 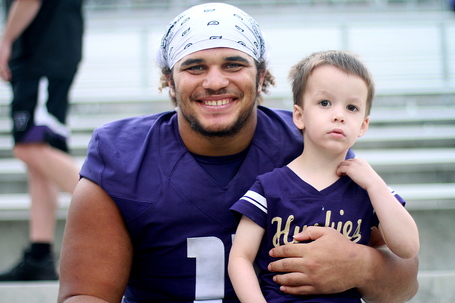 Did any of you make it to the practice?  Leave your observations, pictures and comments below!