If you could bring a UW alum back from the recent past to contribute to this team, who would it be?

Holy time travels, Batman! We've only got 18 days to go 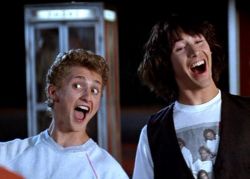 With just 18 days to go, the reality of your 2014 Washington Huskies is starting to take shape.  Positions of strength are emerging and areas where the Dawgs look thin are starting to gnaw away at your optimism.  Players are starting to get a little dinged up and the prospects of injuries are further clouding our outlook of the depth chart.

But, what if we had a time machine, like Bill and Ted?  Or better yet, an Ice Bath Time Machine that Coach Petersen could use to summon up a Husky Alum from a previous year's Ice Bath.  What one player from UW's recent past should Coach Pete pull into the future (so that they are still in their prime), suit up in those new Husky uniforms and put into service for the 2014 season?

Obviously, there are a ton of Husky greats to call upon.  So, to make this a little more manageable, let's limit our Ice Bath Time Machine exercise to players who have played just the last decade - 2004 and later.  Given that constraint and knowing what you know about where UW sits right now with its depth chart, with its strengths and weaknesses, and with the prowess of the Pac 12, what one Husky Alum would you pluck out of the Ice Bath Time Machine and put into service in 2014?

Much has been made about the strength and experience of the UW offensive line going into 2014.  However, most of the accomplishment of this line has been in the form of road-grading in the rushing attack.  Pass protection, while it improved in 2013, has yet to present itself as a strength.  Both starting UW tackles Ben Riva and Micah Hatchie have at times been embarrassed by even average Pac 12 pass rushers.  If UW has designs at upsetting Oregon or Stanford in the North, stellar Left Tackle play is a must.  Enter Husky great Khalif Barnes.  Barnes was a 6'5" 310 lb OT for the Huskies between 2001 and 2004.  He was a two-time All Pac 12 player and only surrendered two sacks as a starter in his final two seasons for UW.  He was a second round pick by Jacksonville and is still in the NFL with the Oakland Raiders.  Impressively, he has started 103 out of the 123 games that he has played in professionally.

Reasons for: LT is a must-have position; A first-time starting QB needs a reliable LT; It's been a long time since UW had an all-conference O-Lineman

Reasons against:  The UW O-Line is pretty good as is; Barnes's game may not translate as well in a conference featuring more 3-4's and hybrid-style pass rushers than what he faced a decade ago

You don't have to go too far back in time to recall the kind of job that 'Meda did as a line-crasher and gap controller in Steve Sarkisian's first few years with the program.  At 6'3" and 330 lbs, 'Meda was an absolute load to handle.  When you consider the Huskies 2014 Defensive Line, it is pretty easy to get excited about what we have.  The big question is the depth behind Danny Shelton.  What if we had a NT rotation of Shelton, Ta'amu and Elijah Qualls?  What if we could occasionally get Qualls into a 3T role alongside one of those other behemoths?  Players with the dimensions of Ta'amu don't come along too often and would absolutely be worth a time-machine pick up.

Reasons for: The scarcity of proven college interior d-linemen; The flexibility it gives us on the d-line; The ability to rotate bigs in the modern P12 is invaluable

Reasons against: The UW D-Line is pretty good as is; Ta'amu wasn't always the most consistent guy; A guy that big might  not actually fit in the Ice Bath Time Machine

Would you use  your one Ice Bath Time Machine pickup on a Kicker?  I might not, but the master of details, Chris Petersen, certainly might.  The Huskies kicking game is fraught with questions as three relative newcomers duke it out for the right to kick field goals, among other things.  While Cameron Van Winkle, Tristain Viscaino and Korey Durkee all have their relative strengths, the presence of a highly reliable place kicker can save one or even two games for a UW team that, as built, is already primed to compete in the Pac 12 North.  One or two games could be the difference between 3rd place and a trip to the P12 Championship.  Coons probably edges Folk as the best PK we've had over the past 10 years.  For his career, he was 24-30 on FG attempts including an impressive 10-14 from beyond 40 yards.  At 6'2", 200 lbs, he was also a plus guy to have as a coverage player on special teams.  Layer in the fact that he can kickoff and punt and you have yourself a pretty helpful piece to the puzzle.

Reasons for: Kicking is important!; Our kicking situation is one of our greatest unknowns in 2014; Good kickers are really hard to find in college

I almost pulled the trigger on Coons, but I couldn't get over the fact that the UW offense was so good a year ago that maybe, just maybe, we won't have any games this season that hinge on us making a pressure FG.  A dominating, line-smashing DT who can rotate in against all of the hurry-up offenses we'll face in 2014?  Yeah, that sounds pretty good.  I know that Ta'amu had a reputation for taking a few plays off.  The good news is that with Shelton as a partner, DC Pete Kwiatkowski will actually accommodate those plays off.  Everybody wins.  He's my choice.