Our Fall Camp preview continues with a look at those who will be catching the passes in 2014. Fall camp kicks off with Chris Petersen's opening press conference on August 23d

The Huskies go into Chris Petersen's first Fall Camp with significant questions around not just who is going to play, but what kind of roles each of the Huskies play makers are going to be asked to assume.  New offensive coordinator Jonathan Smith has insinuated that a high-tempo, spread attack highlighted by a strong focus on receivers-as-blockers, not unlike what the Huskies ran a year ago, is on the agenda.  But how that gets implemented remains to be seen.  In today's camp preview, we focus on the receiver situation and the key questions surrounding this high-potential unit for the Huskies.

The Huskies will have their hands full in replacing the contributions that came from the top two players on this list in ASJ and Kevin Smith.  ASJ  was the Huskies secret weapon in the red zone.  His eight TD passes were good to place him #6 in the conference and paced the Huskies attack.  His strength in the passing game was his ability to leverage his height and good hands to make plays, in particular in the red zone.  Note the picture below where ASJ, with his feet on the ground, is still able to out play the leaping Cal defender for the TD. Replacing the things he could do in high-pointing balls and moving sticks is a job not easily undertaken. 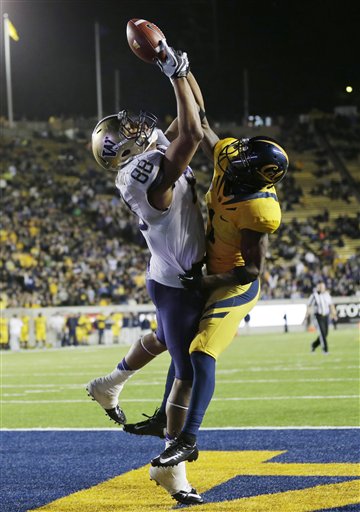 Kevin Smith was the yin to ASJ's yang as he was clearly UW's big play threat most of the season.  He demonstrated his big play abilities in the Illinois, ASU, Stanford, Oregon State and Arizona games.  He was particularly effective when lined up at split end and given the chance to utilize his excellent route running to create separation on post routes.

The losses of both Smith and ASJ will be felt not only as pass catchers but also as blockers.  Smith, born from the mold of former Husky WR Devin Aguilar, was one of the most tenacious perimeter blockers in all of the Pac 12.  ASJ also had grown significantly with his abilities as as a willing and effective in-line blocker.

The loss of Damore'ea Stringfellow is also a blow to the roster given the immense physical talent that he possessed and the potential that he demonstrated in his breakout game at UCLA.  Antavius Sims, despite his obvious athletic prowess, was never able to establish a role for himself under the Sark regime.

The Huskies will not suffer from a lack of play making options returning in the overall passing game.  The challenge for everybody in this lot will be to find the roles that suit them best.

If the Huskies are going to have a chance at matching the output from the 2013 season, a healthy return to form from Kasen Williams is a must.

Kasen Williams is the key.  Coming off of a gruesome broken leg injury suffered against Cal last year, Kasen will require time to get his conditioning back in shape.  If he can get there by the time Pac 12 play opens, and Chris Petersen has indicated that this is a reasonable goal, he instantly becomes the Huskies top option at split end and a force in both the rushing attack and the red zone.

John Ross and Jaydon Mickens were players 1b and 1a in the slot for Sark last season.  Both demonstrated electric quickness with Mickens showing a penchant for throwing the jabs and Ross the ability to delivery the haymaker.  It was reported that both got looks at the flanker role during the spring.  The prospect of having both of these men on the field at the same time is one that will drive D-coordinators crazy.

At TE, Joshua Perkins showed that he has the ability to catch TDs and should again get plenty of opportunities to show off his excellent hands this season.  The Huskies will have a much greater need to call on Hartvigson's number if they want to establish a run game as he is the best blocker of the remaining TEs.  The wild card is the monstrously athletic Darrell Daniels.  A physical freak of nature, Daniels has reportedly improved his pass catching and could be a multi-tool breakout candidate in 2014.

Among the rest of the returning players, many could establish a role.  "Suddenly senior" DiAndre Campbell looks assured to have a role on this team and should get plenty of reps as a blocker.  Kendyl Taylor demonstrated at the the UW combine that he is among the most athletically gifted players on the team and is being returned to his original role as a receiver.  Marvin Hall is another speedster who earned some PT under Sark.  David Ajamu is a young athlete with a ton of upside who is going to need some more time to develop.

Given the bodies already present and the spread of those players across the various classes, UW did not have to emphasize the recruitment of receivers or tight ends in this class.  Getting Drew Sample to commit, however, was a priority for Chris Petersen.  Sample didn't put up big stats in his run-oriented high school offense, but he has great measureables and demonstrated explosiveness when he had the ball. He's also a proven blocker.  Brayden Lenius is a project, but at 6'5" and 220 lbs, his ceiling is very high.  Dante Pettis is the most likely of the three to see the field as a true freshman given his elite athleticism.

The Huskies receiving situation looks pretty good going into Fall Camp, at least as far as number of bodies is concerned.  There are some obvious studs who will contribute in familiar roles - Kasen on the outside, Jaydon in the slot and John Ross bouncing around.  Beyond that, the Huskies coaching staff has some work to do in establishing roles and rotations for the players that they have.  Some of the big questions:

Outside of the QB battle, how the receiver situation works itself out may become one of the most tantalizing and suspenseful story lines in camp.

As I noted in an article last month, the 2014 offense really hinges on Kasen Williams and his ability to return to form following his horrible injury from last year.  When right, Kasen is really the only receiver who gives you plus-level contributions in all of the key dimensions:  blocking, game-breaking and red-zone.  No other receiver on the UW roster can match his combined skill set (though, keep your eyes on the trajectory of Darrell Daniels).  Kasen is absolutely the guy to watch in Fall Camp.

When Stringfellow decided to transfer to Ole Miss, I noted at the time that this almost guaranteed that one of the Huskies three incoming receivers (and probably one of the two wideouts) would get played in 2014.  I've come off of that position a little bit as I've considered the situation that Petersen and Smith inherit (and the fact that Taylor is back at WR).  While there is some imbalance - in particular with a lack of bodies who can play that traditional weak side role - the coaches will have some flexibility in terms of how they want to address it.  If a guy like Pettis has his red shirt pulled in 2014, it will be because he earned it.  And, given the play making talent and upside potential of the bodies already game-eligible, that would be quite the accomplishment.