We are less than 100 days from the start of the 2014 season, and we're kicking off our look at position groups with everybody's favorite: the hog mollies.

This group returns basically everybody from a year ago, and the chart of returning offensive line starts reflects that: 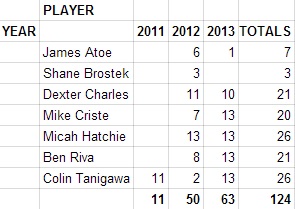 The only starts not returning from a year ago are Erik Kohler's 2. It's easy to see why the offense last season -- particularly the run game -- was so prolific. There were essentially the same five guys starting every game up front. Compare this to another good offensive year, 2011, when Erik Kohler (13), Colin Tanigawa (11), Drew Schaefer (13), Senio Kelemete (13), and Colin Porter (13) started nearly every game of the season. Conversely, in 2012 nine different players started throughout the season.

It's no secret that keeping your best players healthy and on the field is going to yield improved results, but when comparing the potential of the 2014 group to those of the past three seasons it certainly looks like the ceiling is higher than any of them. There's a core group of players who have played a lot of downs at the Pac-12 level and have -- at times -- done so very well.

The keys in 2014 will be threefold: number one is having the top guys stay healthy. Can't control this, and it most assuredly isn't going to happen. I don't know how many teams in the country had four starting offensive linemen healthy for every game, but I'd guess it's not that many, which brings us to number two: James Atoe, or whoever ends up being that 6th man. When somebody inevitably gets banged up, that next guy is going to have to step in and not miss a beat. This is where it'd would have been really nice to get Erik Kohler's 5th year, as he would have expanded the number of experienced guys on the roster to seven, and could be probably counted on to serviceaby play every position on the offensive line except left tackle. Point three is going to be the development and experience of the young guys, because six just isn't going to be enough. It doesn't show up in the chart, but last season the young guys got a ton of action; the guys who didn't start made appearances or played heavily in a combined 36 games a year ago with guys like Dolbec and Tufunga each playing in nearly every game.

Going back to the returning starts, 124 is a big number. By comparison, according to Phil Steele the national leader entering 2013 also had 124. What it means is a matter of debate, as that team was Texas and they didn't exactly blow the world away. Florida State was in the top 10 with 96 returning starts and they won a national championship, while Florida was #14 and they had their worst season since 1979. Clearly it's only one piece of the puzzle.

Verdict: Better. This group returns talent and experience, and should be the best Washington has fielded in a long time. Instead of having guys like Bishop Sankey and Chris Polk make them look good, they'll make whichever guy is in the backfield look great. As for pass blocking... we'll see. It has always been a point of inconsistency among this group, but with a new QB they'll probably shorten things up a bit and not ask the OL do protect in as many deep drops as they had in the past. With everybody back, you'd have to think this group sees improvement.