Johnny Zuppardo is out of the mix for the final spot after signing with Mississippi State on Wednesday.

Junior College transfer Quevyn Winters is verbally committed to UW and is expected to sign today (Wednesday) when the spring signing period officially begins (UPDATE: he signed). The Indian Hills CC wing would take up UW's 12th scholarship available, leaving the final spot up for grabs.

Recently, the Huskies offered a scholarship to Johnny Zuppardo, but he signed with Mississippi State Wednesday. He There are now three freshmen with offers from UW: Andre Adams, Djuan Piper and Lyrik Shreiner.

Most of the talk has been surrounding Piper out of Rainier Beach. A 6'6 forward, he is considered a Minnesota lean but is also considering Washington and South Carolina in his top three (UW comes ahead of the other USC). There is also speculation that he is going to have to try the junior college route, as he could struggle to qualify for many Division-I schools.

Adams has been more quiet recently. The 6'9 power forward out of Arizona could run the high post: he has decent bounce and ball-handling ability, along with an okay mid-range jumper when he is open. He also has shot-blocking ability.

247's crystal ball projections have him going to Arizona State, a heavy lean. In fact, 247 doesn't even list UW as a school he is interested in. In addition to his offers, he has drawn interest from Indiana.

Also from Arizona, Shreiner boasts the best offer sheet of the three. Though he has only been offered scholarships by four schools, one of them is 2013 National Champion Louisville.

The 6'4 shooting guard is an athletic slasher who is best when he is attacking the rim off the bounce. He is known as an extremely hard worker in the classroom and on the court.

To start the recently-finished season, Lorenzo Romar had thirteen players on scholarship. Since then, Perris Blackwell and C.J. Wilcox have graduated and Hikeem Stewart and Desmond Simmons have transferred. That left four open spots, three of which have been filled. There was nearly a fifth open spot when Nigel Williams-Goss announced that he was considering the NBA, but made the decision that every UW fan was hoping for when he decided to stick around for at least another season.

Currently, the players on scholarship for the 2014-2015 season are: Williams-Goss, Andrew Andrews, Jahmel Taylor, Darin Johnson, Mike Anderson, Jernard Jarreau, Robert Upshaw, Gilles Dierickx, Shawn Kemp Jr. (the returners), Donaven Dorsey and Tristian Etienne (class of 2014). Winters could be added to that list. I could make a big table for you that lists each scholarship player by year, but the UW Verbal Commits page has an excellent one.

If I had to take a guess, I would say that none of these three players will end up at UW and that Romar will either find a transfer player from somewhere that we haven't heard about or that he will keep the extra scholarship in his pocket. There is the possibility that David Crisp reclassifies to the class of 2014 and forgoes prep school as well. 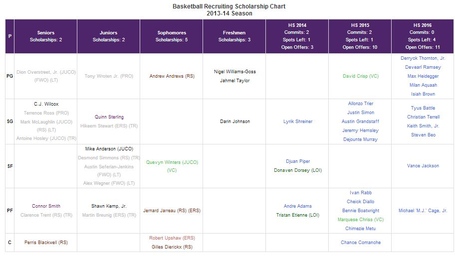