Pac-12 Tournament Bracket: First Round pits UW vs. Utah, Oregon vs. OSU, Stanford vs. USC and Colorado vs. WSU

Share All sharing options for: Pac-12 Tournament Bracket: First Round pits UW vs. Utah, Oregon vs. OSU, Stanford vs. USC and Colorado vs. WSU

So the season has come down to this. The Huskies play at Noon Pacific Wednesday, March 12. You can catch the game on the Pac-12 Networks or by listening to Bob Rondeau via this link.

Generally speaking, we know what the Huskies are up against in the Utah Utes. Utah is led by Delon Wright. If you haven't caught it, SB Nation's own James Herbert and Sam Vecenie reported a great feature on Wright and his path to where he is at today. Go check it out.

Wright is a 6-5 point guard who had arguably the best game of his career against the Huskies earlier this season. The NBA aspirations are real. His length on defense causes a lot of problems for offensive players by allowing him to rack up steals and disrupt passes and hassle ball-handlers. He was second in the conference in steals.

His brother is a sharpshooter in the NBA by the name of Dorell Wright. In the feature linked above, Dorell called his brother a "Rondo-type player." Essentially, he is one of the better passers out there. He has supreme length for a guard, is very quick but does need to develop a jump shot. Wright is shooting under 25 percent from deep.

The Utes as a whole have struggled on the road, where they have a total of two victories all season, and one came against USC. Washington's struggles away from home have been well-documented as well, but Utah is a totally different team outside of the comforts of the John M. Huntsman Center.

Here is a screenshot of the entire bracket. As you can see, the Huskies will play Arizona should they win. (Thanks Pac-12 website) 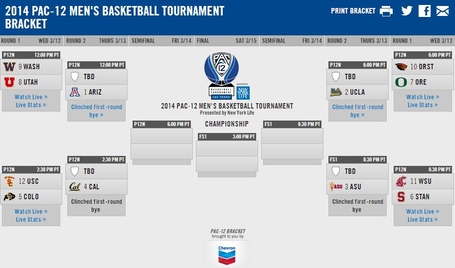 Eric will have your recap after the game. I have an appointment with my surgeon to find out if I am cleared to run in a straight line. For you guys who have been here reading, I really appreciate it. You have been one of the biggest parts of my recovery process, in keeping me positive and upbeat.