Washington came only minutes away from upsetting the top team in the country, but was unable to deal with the suffocating half-court defense of the Wildcats.

That was fun. I haven't had that much fun watching the Washington Huskies play basketball in a long time. The season had appeared to be a dud throughout non-conference play, but this week has been a fun time to be a UW basketball fan. Thursday the Dawgs dominated the favored Arizona State Sun Devils. Saturday, today, Washington took the best team in the country to the wire.

The Dawgs fell just short of pulling off the upset of the Arizona Wildcats, falling in the final minutes to the not-vertically challenged defense Sean Miller has orchestrated, 71-62. The score does not indicate how close the game really was.

C.J. Wilcox and his Huskies were back-and-forth, tit-for-tat, basket-for-basket and hyphen-for-hyphen with the Wildcats until a cold spell with 12 minutes left began to put the game in a precarious position. Wilcox hit a jumper curling off of the free throw line with eight minutes left in the game for the first Washington field goal in over four minutes. A TV timeout followed, and UW wouldn't get another basket from the field (although there were points at the free throw line) until a Perris Blackwell bucket with 1:44 left.

After the basket, Washington needed only one defensive stop to get the game back within a possession. The team kept Arizona from getting the ball inside for the next 20 seconds, but then an inexplicable foul on Mike Anderson with only eight seconds left on the shot clock defending the pick and roll game Nick Johnson two free throws, and the 81 percent shooter knocked them down. The game was essentially over by that point, even if a Wilcox throwdown over a defender occurred late.

It was a game that should be looked at fondly by Washington fans. The Huskies followed up a very strong performance against Arizona State with another good showing against what has been universally lauded as the best team in the country by media everywhere. For the Huskies themselves, there are no moral victories, but one of the benefits of being a fan is always being able to look at the silver linings of a game like today's.

This Washington team is currently missing the tallest player on the team in Jernard Jarreau, who was counted on to be a big part of the scoring load this season, and his length would undoubtedly have caused problems for the large Arizona players who had to roam out to the perimeter to defend him. Desmond Simmons is still regaining his legs following surgery, and today he played only 16 minutes despite being possibly the best defender in the conference against a player like Aaron Gordon.

This Washington team lost by 14 to UC Irvine at home. The growth by this team is exponential, and is a much better team than a month ago. It is a much better team than two weeks ago, really. It will fun to see where the team goes from here. Did they slip too much in non-conference play to make it to the Big Dance without shocking the world this conference season? Probably. Should you be along for the ride anyways? The answer to that is a resounding yes. 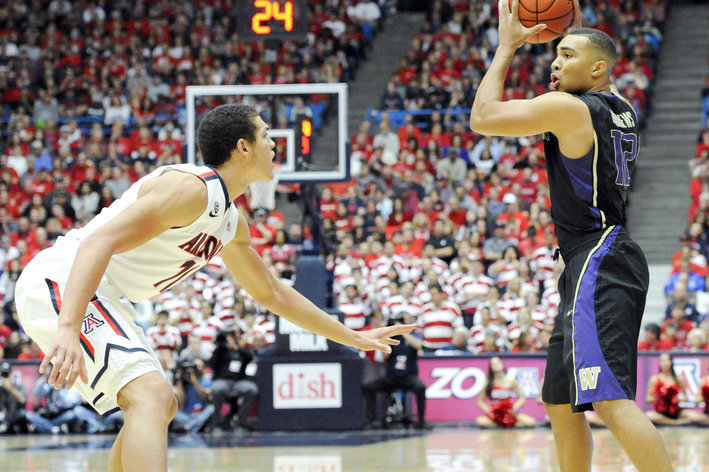 Come and get your Dots here:

No reason to hang heads. This was a fun game to watch, and there are positives to take out of it. If you take one thing out of this game, let it be this: Washington can hang with any and every team in the country. Don't miss them, because every night you can see something special.
Follow Ben on Twitter