Nigel Williams-Goss explodes on the Beavers for 32 in what may be the best game by a freshman in Washington history as the Huskies use a big 23-5 run to defeat Oregon State.

Going into the season, expectations for Nigel Williams-Goss were relatively high, deservedly so. He was a McDonald's All-American. Some scouting services had him rated as a five star prospect. Recent five star point guard prospects had put a little bit of a damper for Huskies fans, with Abdul Gaddy never living up to the hype and Tony Wroten becoming a one-trick pony during his lone season.

Williams-Goss is changing all of that. He was easily the best player on the court today with 32 (!) points to go along with five rebounds, three assists and a steal. The 32 points are the most that any Husky has put up this season, including C.J. Wilcox.

The last time a Dawg dropped 32 points in a game was Terrence Ross against Northwestern in the 2012 NIT. After a bit of digging, I found that the last time a Husky put up over 32 points was Quincy Pondexter, in March 2010 over Oregon. This was a great performance by someone who is going to be a Husky great, depending on how long he dons the purple and gold, which I see as being a while.

Early on, if UW was going to make a basket, it was going to be in the paint. Perris Blackwell was the biggest key to the offense, his screens opened up driving lanes and his interior passing led to several layups. He had four points very early on, but his contributions lessened as the half went along. Keeping the game close was Nigel Williams-Goss. He finished the half with eight points to lead Washington. What was coming in the second half was an explosion of scoring that not even C.J. Wilcox has done.

The length for Oregon State caused Wilcox all kinds of trouble with the exception of a several minute-long run in the second half. Eric Moreland and Langston Morris-Walker combined to force Wilcox into two turnovers and only four points on 2-5 shooting.

Despite Wilcox not scoring as has been the norm - seriously, check out how well he has been scoring -  the offense didn't do anything without him on the floor. He was out for the last three-plus minutes of the half, and OSU stretched its lead from two points to seven before the one of the dumbest fouls you will ever see was made by Hallice Cooke on Mike Anderson with less than a second left.

After Roberto Nelson took a fadeaway three with five seconds left on the clock (too early) Andrew Andrews outletted the rebound to Anderson, who took the ball down the court and was about to heave the ball up for a desperation three when Cooke made contact. Anderson made both of his free throw attempts.

Coming out of the second half, things looked like they were going to slip away from Washington. OSU built its five-point lead up to 12 and Lorenzo Romar was forced to call a timeout. After that, Washington went on a mini 8-2 run that featured three baskets assisted on by Anderson, who balled out today. He had eight points, five assists and five rebounds but his effort goes beyond the statsheet, as it always does. He was a big reason why Eric Moreland was a non-factor offensively (one point) despite putting in a strong defensive effort against Wilcox.

Anderson had one of my favorite plays of the season during that run. He grabbed an Angus Brandt miss and took one dribble up the floor before rocketing a three-quarter court bounce pass to Nigel Williams-Goss, who was able to finish with the foul against Brandt. The extremely long bounce passes are difficult to defend against when an offensive player does them correctly, and boy was that done perfectly.

The teams traded free throws for a while with a Devon Collier dunk sprinkled in the mix, and then the game turned. OSU held a 53-45 lead until Anderson (who else) sparked the beginning of the run. He hit two free throws after being fouled by Daniel Gomis. He then gathered a missed jumper by Cooke, outletted to Wilcox, who took it all the way to the rim for a bucket plus the foul, though he couldn't cash in on the free throw.

Washington Eats Up Oregon Inside For 87-81 Win 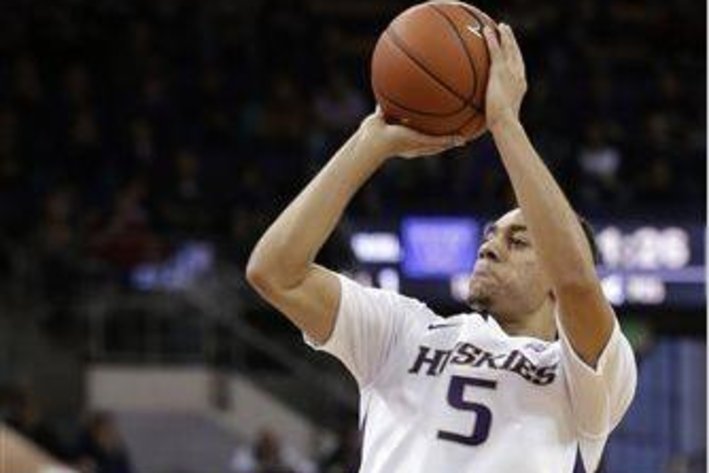 The next several minutes were dominated by Washington, with Wilcox taking a starring role. He and Williams-Goss combined defensively to force a Brandt turnover, then when Anderson missed a contested shot at the rim, Wilcox was there to follow it up with a dunk, which gave him eight for the game. He was starting to heat up, and following a Blackwell layup, he scored four more, giving him eight of Washington's previous ten points.

Until the TV timeout with a shade over seven minutes left, Washington went on a 23-5 run to take a ten-point lead at 68-58. From then on out, Williams-Goss just kept scoring, not allowing the Beavers to get back into the lead, though OSU did cut the lead down to three at one point, but then the freshman made an and-1 basket, making the free throw to put Washington at a six-point advantage with 44 seconds remaining.

Free throws and inconsequential shots by Oregon State put the game at the final margin (as well as giving Williams-Goss his final total of 32 points).

Dang, the recap alone totaled over 900 words. Let's see how far the Dots take us.

I think those two long Dots are enough for today, what are your Dots from a very entertaining game?
Sweeping the Oregon schools puts Washington at 5-3 in conference play with a very winnable face-off against Washington State coming next Saturday.
Ben is on Twitter. His snack at halftime was Greek yogurt with honeydew.