Appreciating the greatness that is C.J. Wilcox 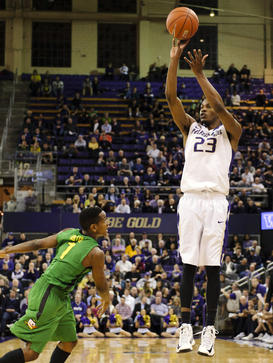 The numbers that C.J. Wilcox has put up this season have been matched very few times in history.

The game was hard-fought, the entire way. Neither team gave up at any point in the game. The lead changed hands with seemingly every basket. The biggest lead of the night was six points. If not including the end of the game when Oregon was fouling any time that the Huskies controlled the ball, then each team held a lead of five points, which then would have been the largest point differential of the entire game.

In its 80-76 victory, UW showed it is able to play with a team that has the ability to dominate the glass. The final rebounding total shows that Oregon had a 32-25 victory in the column, which is nothing to laugh at, it is a pretty big margin. There was one stretch where the Ducks took hold of every rebound in sight. At one point in the first half, Oregon grabbed 16 of 20 rebounding opportunities.

The extra opportunities via rebounds were crucial to the game staying close, as Washington shot a blistering 58 percent from the field as opposed to a less-hot 43 percent for the Ducks. It appeared early on that turnovers were going to be a major factor in the game, as it was sloppier than a ten-year-old eating a stack of baby back ribs early. Both teams grabbed their napkins and were able to tighten up their handles in the second half, however.

Game ball goes to C.J. Wilcox. He earns a lot of game balls, but this one goes to him without a doubt. While Andrew Andrews carried the team in the first half with 12 points, Wilcox was right behind him with nine. Then when the second half happened, Wilcox continued his scoring, while Andrews took a backseat to the fifth-year senior, scoring only five with all coming from the free throw line (8-10), three of them when the Ducks intentionally fouled.

Wilcox scored 14 in the second half to give him a total of 23. Dana Altman decided to let the 5-feet-8 Jonathan Lloyd on Wilcox for most of the game. The result was all 6-feet-5 of Wilcox shooting over the diminutive Lloyd and rising up like the sun, making 5-6 threes. None were bigger than his last. The game was within one point, and the Huskies were leading with less than a minute remaining. He received the ball off of a down screen from Blackwell about five feet from the top of the key with the shot clock winding down. He took one dribble, and immediately rose up for the three. Some would say that Lloyd was in Wilcox's face, but really, he was in Wilcox's chest.

Andrew Andrews makes head-scratching plays at times, but then at other times he makes plays that nobody else on this roster is capable of making. He gets knocked to the floor frequently and he was rewarded today with 10 foul shots, which made up the majority of his scoring. It is refreshing to see Andrews being an efficient scorer. Early in the game, he made a pull-up mid-range jumper and it would have been easy for a fan to think that he would resort to them all game long, and it was not the case.

The game went back and forth like a good old-fashioned tug-o-war, neither team giving an inch (hey that's where the phrase "giving an inch" may have actually come from). Both teams competed. One had the hot hand, the other had the big guys. When a hot hand is C.J. Wilcox, and the rest of the team is playing decently, any team in the Pac-12 will have trouble with Washington. If WIlcox is hot and the rest of the team is playing well, the Huskies could beat any team in the country.

Oregon State comes to town as the Dawgs will try to sweep the Oregon schools. Saturday at 2 p.m. on the Pac-12 Networks. I'll be watching.
Follow Ben on Twitter, he wrote this with Linkin Park on in the background.