UW vs. Boise State: How Steve Sarkisian Used 'Rocket' Motion and Play Action to Set Up the Big Play

We take a look at several plays in the first quarter of the Huskies - Broncos matchup to look at Steve Sarkisian's play-calling and how he set up the Boise State Defense for some big pass plays.

Share All sharing options for: UW vs. Boise State: How Steve Sarkisian Used 'Rocket' Motion and Play Action to Set Up the Big Play

Football is played like a game of chess. The similarities are everywhere. There are pieces of plastic flying all around the board/field, sometimes the littlest pieces/players can make the biggest impact, and most importantly: every move made is used in conjunction with the others to deceive and set up the opponent. Washington's very first tone-setting touchdown drive was Steve Sarkisian (insert advanced chess strategy here that involves baiting one's opponent)ing the Boise St. Broncos.

Joshua Perkins is a versatile chess piece. A player who has the ability to be an in-line blocker with the skill to move outside as a WR makes him a perfect fit for the no-huddle UW is using. It means that Sarkisian doesn't need to sub in order to switch from a 12 personnel look with an overloaded right side for Sankey to run behind to a spread out 11 set with the ability to sling it all over the field. Not that they need to go without subbing, but regardless, it is a nice ability to have. A player like that is known as a joker/move TE. I will probably get more into that as the season goes along, and we see how Sarkisian uses this toy. Yes, he has Austin Seferian-Jenkins to fill this role, but he works better as an over-the-middle threat than as an outside receiver.

So, we start off with 10:43 remaining in the first quarter. Washington has several first downs already and is moving the ball down the field nicely. John Ross has three catches, Kevin Smith has two catches himself, and Sankey and Price each have a three yard carry. Following a Colin Tanigawa false start, UW faces a 1st and 15 from their own 45-yard line.

Sankey lines up behind Price in the Pistol. Michael Hartvigson and Perkins line up on the right side of the line on the closed side of the field. On the open side of the field Kasen Williams is lined up in the slot and DiAndre Campbell is out wide. Boise responds with their base 4-2-5. The LCB for BSU is lined up outside of Hartvigson. He has to enforce the alley in case of a run play. 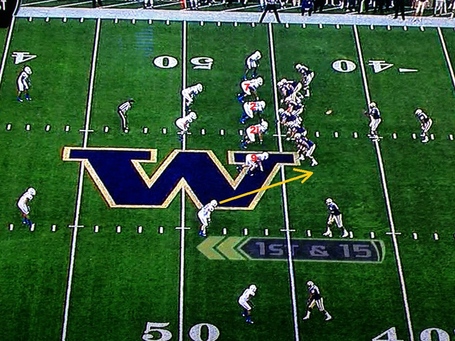 The defensive line techniques are listed within the above picture.

Every player on the line has a simple one-on-one blocking assignment. Perkins has the CB, Hartvigson has the 6-tech DE across from him. Ben Riva (RT) deals with the 4-technique linebacker. Tanigawa faces off against the 2-tech DT lined up in front of him. Mike Criste immediately goes up to the second level to attack the LB. Dexter Charles has his own 2i-tech to deal with. Micah Hatchie takes on the 9-tech DE to his outside shoulder.

The nickel back across from Williams looks into the backfield instead of at the towering WR in front of him. This makes it very difficult for Williams to sell his route and get the safety away from the run. In fact, the safety is the only player who ends up in the front-seven area unblocked, as every linemen/TE does their job excellently.

(If viewing from mobile, this picture is appearing upside-down. I don't know what is going on.) 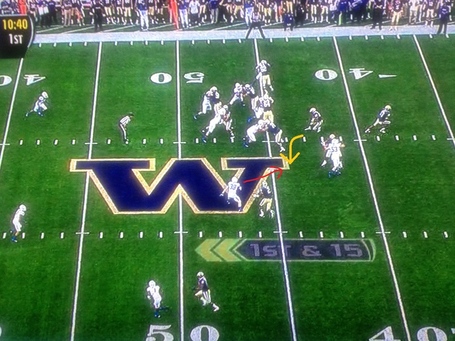 There is a large cutback lane opened in the weak-side B-gap thanks to the 7-tech WDE rushing straight upfield. Charles standing his ground against the DT and Criste getting a very solid block against the Mike are both very instrumental to this very large hole being opened up for Sankey.

One problem: the safety that lined up across from Kasen Williams is on his way to the running lane. In order to turn this run into a solid gain, Sankey needs to make this defender miss, otherwise he will be stuffed for minimal or no gain.

Unfortunately for Sankey he loses quite a bit of speed redirecting from the (probably designed) strong-side A-gap to the weak-side B-gap, as he was running full head of steam for that gap when he realized it really wasn't there and changed his direction. His cut wasn't 100% smooth and by the time he reaches Charles's outside shoulder Jonathan Moxey is already in the lane with momenteum towards Sankey.

His juke almost works, as he gets out of the freshman's tackle, but loses his balance attempting to land his juke. 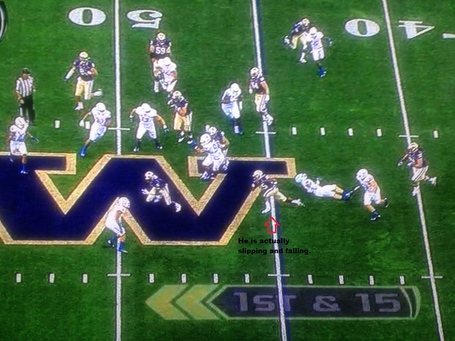 Washington lines up with 11 personnel, Hartvigson in-line on the right with Sankey to the left of Price, lined up in the shotgun. Williams is wide right with Mickens next to him in the slot, and Campbell on the bottom of the screen. Mickens is sent into motion around the back of Price and Sankey. This is known as the ‘rocket' motion. It was covered in a FanPost here. Some really good stuff. 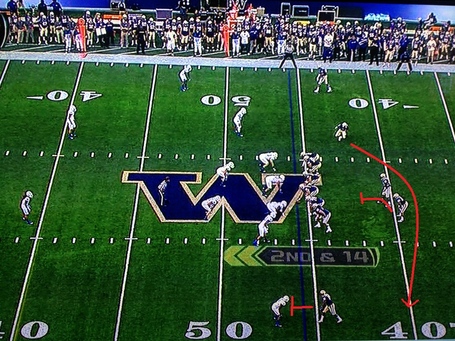 This could be one of Sark's ‘package plays' where Price has the option to hand the ball off, hit a receiver on a quick route, or drop the ball off on a screen depending on what he sees in the defense during his pre-snap reads. Or it could be a very well-sold play-action by the offensive line. Regardless, Price fakes the handoff to Sankey and the defense follows it. 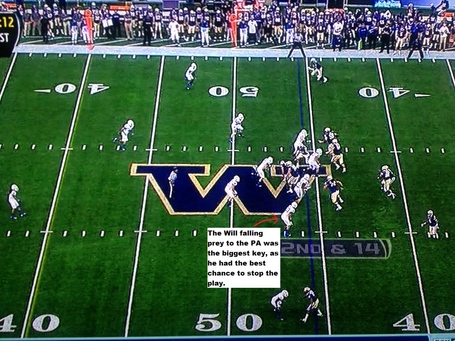 Notice that every single Boise defender save for the corner in press coverage on Campbell has their eyes on Sankey. Holding the defense with the play-action is probably the biggest reason this was successful.

Mickens then follows the block of Campbell for a gain of 11 yards.

So now we skip over a four yard first down run by Bishop Sankey (boy are we spoiled) to the play that was set up by these two previous plays.

Washington begins in out of the shotgun in 11 personnel. Dwayne Washington flanks Price to the left and Michael Hartvigson is in-line to the left. Kevin smith is out wide to the left with John Ross in the slot. Wide right is Kasen Williams.

Boise is again in a 4-2-5 alignment. The nickel back is on the weak side, which means a linebacker is tasked with covering John Ross: advantage Washington. 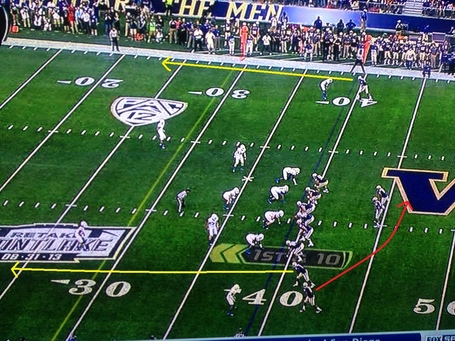 When the ball is snapped, Ross releases into a ‘go' route. Hartvigson goes on a ten-yard ‘in' route while Kasen Williams goes on a ‘go' route. Sankey releases out into the flat after a play-fake that nobody bites on.

Price looks at Kevin Smith, drawing the attention of the entire defense. Just like the previous play, look at the eyes of the defense. Every defensive player is looking at Price, while the strong safety (who has deep responsibility on John Ross) has his body turned completely towards Smith. He doesn't see that Ross has slipped past the cornerback and is making his way down the field. 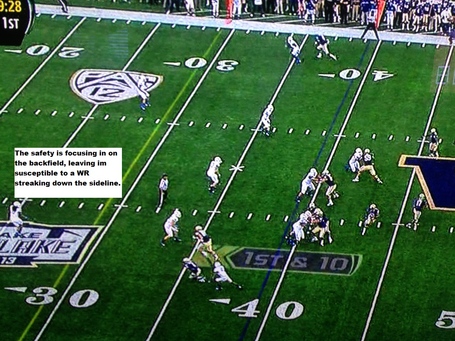 After looking off the safeties toward Smith, Price re-sets his target on Ross, who is beating the safety deep. After a hitch, he throws. He just misses Ross. Sark says Ross slowed down. Price says he missed Ross. Either way, the pass fell incomplete.

Even though the pass was incomplete, it still shows the type of effect that the previous plays had. Ross found himself open thanks to the previous plays. The use of the rocket motion by Steve Sarkisian caused the safeties to be concerned with the screen pass and creep up.

(Just a side note, Yahoo has this play all sorts of messed up in their play-by-play listing. It was listed as 3rd and 1, and that Price passed to the right.)

Washington lines up with 10 personnel. Sankey lines up to Price's right. Trips left with Kasen Williams lined up about three yards wide of Micah Hatchie, Mickens in the slot and Smith out wide. Damore'ea Stringfellow is wide right.

BSU responds with a 3-3-5 alignment. The nickelback is aligned on Mickens while Williams remains uncovered. The free safety creeps up near the box. The defense may be in a ‘dollar' 3-2-6 alignment as well, I just don't know the Broncos' personnel well enough to determine what they are in, exactly. 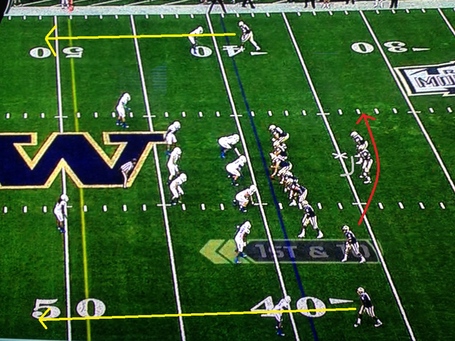 Mickens goes into rocket motion. As he passes by Price, all three linebackers take a step towards where Mickens is going. The strong safety (the same SS, Jeremy Ioane, who was attacked on the deep throw to Ross) takes a step forward at the play-action, pauses for a split-second, then drops back, again with his eyes on either Mickens or Price, can't tell exactly. He takes about three steps total before he starts actually heading backwards.

Smith beats the corner off the snap and immediately gets a step on the corner. Ioane doesn't see this, as his back is turned still. He is probably watching Williams across the middle, as Price looks that way first before setting his eyes on the streaking Smith. Williams is covered by the linebackers. 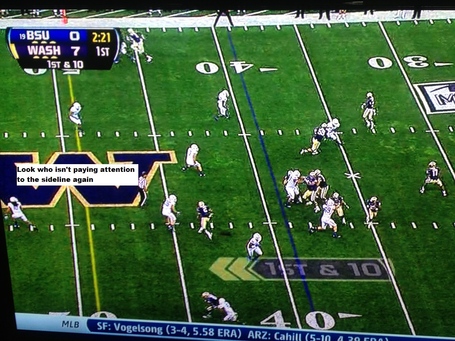 Price throws a laser that is caught by the outstretched arms of a diving Smith for a gain of 42 yards. 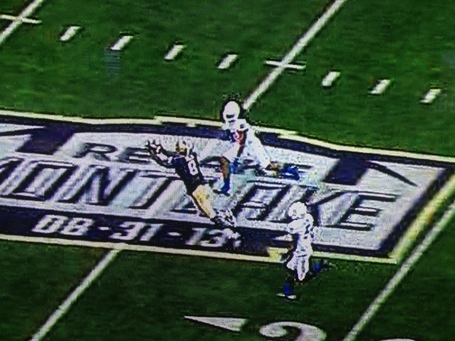 When a play caller gets into a rhythm, every play works together. Plays don't get pulled randomly out of the book and thrown in there. One play sets up another which sets up another and so on. Here, we can see how Sark uses play action with his All-Conference RB along with rocket motion Mickens to set the defense up for big plays.

What are your thoughts on how Sark uses the ‘rocket motion' and play action? Is it something that could be expanded upon to utilize the rocket sweep (I bet you can figure out what that is) or should it be left how it is, used to initiate screens and distract defenses, or should it be scrapped? Don't say it should be scrapped or we will mock you.