A little Hau'oli, a little Arizona and a shoutout to Isaiah Thomas. These Dots are of the "can't miss' variety.

Dots - All Shapes and Sizes 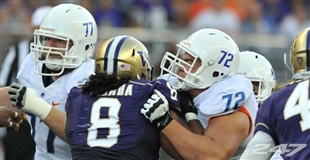 Since Hau'oli is the theme of the day, let's focus are QOD on the Huskies' Defensive Line. Last season we struggled against the rush with zone-read teams and in generating a pass rush against just about anybody. How do you feel about what you've seen from this year's D-Line?