It's Christmas Eve Eve, and we've got your daily dose of dots.

The boys over at OBNUG have the depth chart for the Broncos for August 31st.

Husky Stadiums official capacity will break the "magical" 70,000 threshold as hoped for by so many fans:

Follow men's soccer? They may be pretty good this year:

If you've not been following the Johnny Manziel situation, he was found innocent of selling autographs, but will still be suspended for the first half of A&M's game against Rice for signing the wrong autographs, or something.

The guys over at State Of The U (SBN's Miami blog) picked some games from around the country, and they like the Huskies over the Broncos.

Over at the Seattle Times, everybody's favorite Jim Lambright did a live chat yesterday. His comments about his feelings on the Ducks, their fans, and Autzen Stadium are echoed by many Husky fans, I'm sure.

Over at Softy's blog, he's got a ton of pictures from yesterday's tour of Husky Stadium. Here's one that he posted to twitter that I enjoyed of Keith Price and Troy Williams (among others) sleeping at their lockers: 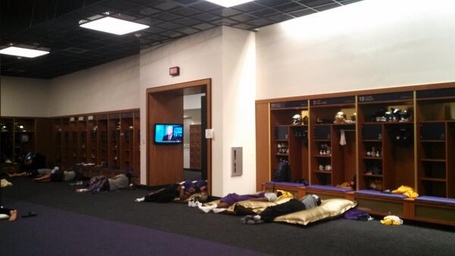