Taking a look at the 4-3 defense, and Washington's use of it.

Share All sharing options for: The 4-3 Defense: Defining Washington's D

Jif is tried and true, for us. We know it tastes good, we know it works for us. The jam has changed over the years, as has the bread. One constant is the peanut butter, however (no, this is not a sponsored post, I swear).

This is all a metaphor. For all I know, Wilcox has an Epee Pen on him at all times because of a severe tree nut allergy. That would be unpleasant, because peanut butter is awesome.

Wilcox’s lone season as defensive coordinator for the Washington Huskies was filled with multiple defensive alignments and personnel groupings, as I discussed earlier. Every defense has different personnel groupings and formations, but one of the main differences with Wilcox is how often he is willing to use different "base" personnel.

A team’s base personnel and base package is usually defined by who and how the front seven line up. Are there three linebackers and four down linemen or vice versa? How do they line up, etc. One of the formations that is used by Wilcox is just the plain old base 4-3.

What you already know is that the 4-3 is a defense that has four down linemen and three linebackers. That is why it is called the 4-3, obviously. There are two defensive tackles, two defensive ends, two outside linebackers and a middle linebacker. There are also two cornerbacks and two safeties, but the safeties and cornerbacks have very similar responsibilities as in the 3-4.

We will start this from the inside out, with the defensive tackles. In a base 4-3, there is no nose tackle, one hulking piece of man who anchors the entire defense with sheer girth in the middle. There are the left and right defensive tackles.

DTs can line up anywhere from a 1-tech to a 3-tech. (Remember techniques and gaps?) The diagram does not show the 1-tech, which lines up between the center and guard, in the offensive A-gap.

When it comes to pass rush, the defensive tackles try to collapse the pocket. They attempt to shoot their gap and not allow the quarterback to step up into the pocket, and also disrupt any sight lines they may have to see their receivers. Interior pressure is often more important than pressure off of the edge when it comes to forcing turnovers and incompletions.

Depending on the defensive philosophy and play call, the DTs may play strong-side and weak-side. Typically the bigger of the two tackles will play more inside as a 1-tech or 2-tech (think Danny Shelton, clogging up the lanes in the middle), while the smaller of the two plays somewhere between a 2- and a 4-tech. Typically they are lined up in a 1-tech on the weak-side and a 3-tech on the strong side, but again the scheme may dictate differences.

Both DTs are supposed to do their best to stop inside runs, plug their respective gaps, and also keep blockers off of the linebackers, along with pushing linemen into the QB.

Defensive ends are strong-side and weak-side more frequently than the DTs. The strong-side DE tends to be bigger than the WDE, as he is typically taking on the run game more, as offenses (historically, things are changing) tend to run off of the RT, the "power tackle." I heard that term off of Madden, said by Phil Simms. The right side tends to be the strong side as the TE lines up on that side more often. I believe (someone correct me if I am wrong) that it is because the QB faces the right side being right-handed as such.

The SDE is responsible for the C-Gap (OT/TE) or the D-Gap or Alley, depending where he is lined up. On outside runs he looks to string the RB along if he cannot set the edge. Pass rushing, his responsibility changes greatly depending on the play. He can be asked to chip the TE before rushing the QB. He can drop into a hook zone or cover the flats. Sometimes (not often) he will be tasked with covering the tight end.

SDEs can line up anywhere from a 4-tech to a 9-tech. It is rare to see a 4-tech DE but it does happen. Depending on the offensive formation and defensive play-call he moves around, usually staying within the 5-7 range.

The WDE has a very similar job, except simplified: bring the QB to the ground, and funnel the runs back the other way. He will sometimes drop into zones, sometimes chip TEs, but this guy is QB-attacking specific. This is Josh Shirley. Well, sort of. Shirley fits a WDE in a 4-3 Under better but more on that in the future.

WDE’s always line up outside of the OT, oftentimes even wider to allow a better angle for attack on the QB. 9-tech is the widest they will go, and 6 is usually the shallowest. (Remember that 8-technique is wider than 9)

The linebackers in the 4-3 vary wildly between the schemes, so I will throw a few generalities.

The Mike LB is the middle ‘backer. He lines up head up on the center but about five yards off of the LOS. John Timu is the UW Mike. His job in the run game is to control both of the offensive A-Gaps and plug those holes. He requires the DTs up front to take on blockers otherwise he will get hit by guards and the center rendering it difficult for him to attack the ballcarrier.

In the pass game he tends to short zones and the tight ends. Again, it depends on the play call, but he sometimes runs with the TE, sometimes covers shallow zones, and sometimes has to cover the RBs (although this is often the job of the SAM or Will LBs but, play call).

The Mike is the "quarterback of the defense." He makes most of the audibles according to what the offense is doing. He makes more adjustments of the line than any other player. He controls shifts, and sometimes even modifies coverages. The term ‘instinctive’ is thrown around a lot, typically with safeties and linebackers. The Mike has to be a very instinctive player. Instinctive is scout-speak for intelligent. The instinctive football player can diagnose the opposing play and act on it. I can recognize what an offense is doing via views from the TV set. If I was put on the football field I would have no idea how to tell what the heck is going on. Touchdown Boise St.

The Will and Sam have very similar responsibilities in pass coverage: short zones, RBs and TEs depending on play call and scheme. Sometimes the Will will (hehe) have to cover the slot WR if the defense doesn’t respond to 3 WR sets with their nickel defense.

Wills often are backside contain guys. They try to prevent the RB from hitting cutback lanes, and have to be disciplined not to overpursue and get caught out of position. If they are run at, their duties are swapped with the SAM’s, essentially.

UW using a 4-3 "stack." That is again the term used in Madden for this defense.

One way that you can tell that they are not in an over or under front is if none of the LBs are outside of the D-linemen. The SAM (in this case it is Shaq) is lined up in a 4-technique, directly across from the LT. The Will is Princeton Fuimaono.

We can use this play to get an idea as to how the 4-3 defends a weak-side run.

The situation is 2nd and 5, a great place to be as an offensive coordinator, with all of your options available. OSU lines up in 21 personnel, with the deep in the Stormy Woods Storm Woods lined up as the tailback in the I formation, TE off the LT’s shoulder..

The WDE is Josh Shirley, lined up in a 7-technique. This is a guess, he could be in a 9 but it does not appear that he is two full men wide of the OT; difficult to tell from the camera angle. Defensive left (weak-side) to right the line goes:

What you may notice is that there is a large gap between Tupou and Shirley. The gaps to either side of the RG are unmanned by D-lineman. He could attack straight onto the second level and attack Fui who is lined up in a 4-technique (could be a 2-tech) over the OT.

When the FB is thrown into the mix, it essentially adds another gap the defense has to cover, as when he hits a hole, there is now space to each side of him in place of just one gap that he hit. is at a disadvantage if the offense tries to run off the inside shoulder of the RT. They are at a disadvantage.

The ball is snapped and OSU shows run. The RG and C team up to push Tupou back a yard and a half. Shirley bolts upfield and takes himself out of the play. Shirley went too far upfield to even force Storm Woods to cut inside any faster than he would like. He takes himself totally out of the play.* takes on the LG and LT and begins to wash down to the play-side. hits a stalemate with the TE.

The coaching staff calls the position Shirley plays the "rush position." Not rush end, rush backer, Weak DE, but the rush position. It may be that his one and only job is to get to the quarterback, and sacrifice run defense. I doubt that it is to such an extreme as that, but it certainly is a possibility.

The LBs all read and react, as is their job. The first to diagnose the play is Timu, who begins to move towards the LOS and the sideline before Sean Mannion can even get turned around. Fui is only slightly behind him while Shaq creeps toward the LOS, keeping himself from overpursuing in case of a cutback. 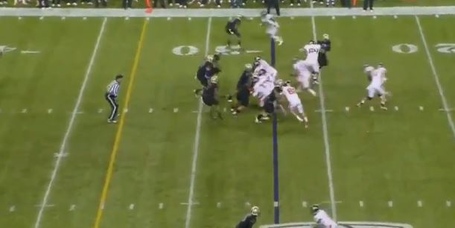 The only potential cutback lane would be on the outside shoulder of the OT, but the hole is wide enough for Danny Shelton to pass through untouched, so Woods follows his blocker through it.

Fui and Timu both are responsible for the massive hole in the C-gap, as and Tupou have clogged up the A-gaps and the double on Tupou takes out the B-gap entirely.

Shaq starts to chase down the play from the backside, as there is no room for the back to get to the non-play-side and do any damage.

The way that Woods takes the handoff, it would appear that the run was designed for the B-gap, as he is running full-speed behind his guard – currently in battle with Tupou. He has to stop and loses all momentum. I am no O-line expert, but my guess is that there was a miscommunication as to which hole to hit and who to double.

Regardless of the communication, the stop and start of Woods gives Fui time to fight off the block of the FB and Timu time to do the same with the RG, who has moved on from Tupou to the Mike.

Fui gets the first hit on Woods, which slows him down. Timu then gets a hand on him, before Shaq finishes the tackle. News flash: Shaq Thompson is really fast.

Tupou also gets involved a little bit on the tackle, pushing the C into the entanglement that is Woods and co.

So, what do you think of the base 4-3 defense? What strengths do you see us utilizing? What potential weaknesses could hurt us with it? Do we have the players to run it?