The Gekko, in a painstaking effort, went through and picked every P12 game in 2013. He is amazing.

The conclusion of the Oregon preview means that we have now completed the Gekko File preview series for 2013. This year's previews provided the foundation for some good conference-wide debate and attracted a lot of eyeballs from across the blogosphere. But, as of yet, we haven't seen what the picture looks like when it is all pulled together. In my grand finale for the pre-season Gekko Files series, I take a game-by-game look at the Pac 12 regular season and make my forecasts on how everything shakes out at the end.

Last year, the season began with everyone and their mothers believing that the Pac 12 South was going to be the whipping boy for the North despite the fact that USC was a pre-season #1 pick. This year, the gap has clearly closed between the two divisions. The story in the South, once again, is USC. However, the tables have turned. If it were the case last year (as I noted in the 2012 Gekko File preview of USC) that USC was getting over rated, it is clearly the case this year that the prospects for their success are being under heralded. Despite the fact that the Trojans will be breaking in a new QB - always a source of pessimism among competing fanbases - the Trojans return what I believe is, pound for pound, the best starting 22 in all of the Pac 12. Whomever starts at QB will have the benefit of the best receiver in the nation in Marqise Lee, a high potential O-Line, an underrated weapon in Xavier Grimble, a tough as nails back in Silas Redd and a plethora of young talent waiting to shine. The Defensive side of the ball has the talent to compete with Oregon and Stanford as the tops in the P12. The influence of a new Defensive Coordinator in Clancy Pendegrast should help translate that talent into results and the benefit of a schedule that features 5 home games should translate into a first place finish - and a top 10 rating - for USC in 2013.

There will be a bunching of teams just behind USC in the south as ASU, UCLA and Arizona battle it out for the right to carry USC's jock. ASU is my pick here. I'm impressed with the depth that they have at QB with Taylor Kelly and Michael Eubank as well as the potential for Marion Grice to explode as a featured back in that high-octane offense. In addition, playmakers like Carl Bradford and Will Sutton will create enough havoc to cover up some of the weaknesses that are present on the defensive side of the ball. UCLA is a major threat. However, their road is going to be a little bit tougher with the loss of key players like Jonathon Franklin, Joseph Fauria and Datone Jones. Brett Hundley is going to have to grow past his "dink and dunk" game of 2012 and become the main playmaker on an offense that doesn't have as many weapons as last year. The presence of Anthony Barr is a huge plus defensively, but the entire secondary is getting overhauled which will provide some growing pains. Arizona is a player in this conversation, but there are questions with that squad as their defense, on paper, looks not quite up to par with the rest of the Pac 12 and the QB situation remains unsettled.

Utah and Colorado are in the next tier down in the South. Utes coach, Kyle Whittingham, raised eyebrows both when he mentioned in the offseason that rebuilding the talent base to Pac 12 standards would "take a little while" and when he hired Dennis Erickson to take over as a "Offensive co-Coordinator". Utah has talent and a bunch of tough players with some fight in them. But they are overmatched talent-wise, in particular with the graduation of players like Star Lotuleilei and John White, and have a bit of a road left to hoe. Another wave of rebuilding is underway at Colorado and, despite the presence of stud Paul Richardson, the Buffs do not yet look close to being all that competitive in the South.

My forecast for the North is a little different than the aggregated popular opinions of the experts who cover the conference in the media, but not by that much. I try very hard to look at each team from the perspective of the season ahead while minimizing the influence of last year's outcomes in my forecasts. When I look at the P12 North, I see one team that is heads above the rest and a shuffling of the deck chairs among the teams that follow it.

The story at Oregon this year is the departure of Chip Kelly to the NFL. Chip leaves behind a team that is in great shape at most positions and one that is totally dialed into a unique philosophy. There is no doubt that the schedule and the talent lay out well for Oregon to make a national title run. However, one must ask the question as to how many wins Chip Kelly, by himself, is worth in a season and if the maturation of pieces like Marcus Mariota, De'Anthony Thomas, Colt Lyerla and Boseko Lokombo are enough to compensate for that loss. I'm guessing that there will be a bump in the road, but that the final result will be a first-place finish in the Pac 12 North.

Stanford, in my opinion, lacks the offensive weapons to hang with Oregon and will be challenged by the up and coming teams in the Pac 12. While they clearly have the best defense in the conference, I am guessing that their lack of red zone and third down conversion execution in 2012 will come back to bite them in the form a few more losses in 2013. Washington stands to benefit from Stanford's return to earth, but not enough yet overtake them in the standings. I do like Washington to take the step forward that everybody expects thanks to the depth that is emerging across the roster and incremental contributions in the pass rush and passing game that we should see from the linebackers and wide receivers, respectively.

The bottom half of the North will be a slog between Cal, WSU and Oregon State. I think Cal under performed to their talent in 2012 due to injuries, bad luck in areas like turnover margin and poor QB play. All of that changes under Sonny Dykes who, I think, will have an immediate impact on offense and pull Cal up a notch or two in the standings. WSU is also getting better and will emphasize depth at wide receiver and strength right up the middle of the defense with players like Ioane Guata, Darryl Monroe and Deone Bucannon. Their O-Line is still a mess, but it will be not quite as bad in 2013 as I predict them to finish fifth. The biggest 2013 faller, I believe, will be Oregon State. The gutting of the middle of their defense, in which they are counting on JCs to backfill, and the relative lack of proven playmakers on offense beyond Brandin Cooks gives me pause with the Beavers. I'm going to catch hell for this, but I am predicting for them a return to the basement in the North.

The following outlines my forecasted final P12 standings for 2013. 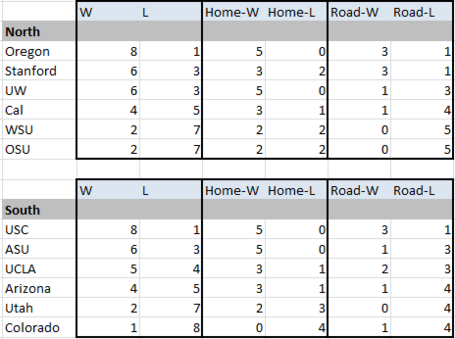 As you can see, I've predicted Oregon and USC to finish tops in their divisions, each with 8-1 records. In the North, Stanford finishes with the same record but just ahead of UW thanks to a tiebreaker. I expect the Huskies to run the table at home, but to continue to struggle to show that they can win on the road. Cal takes a clean 4th place finish with WSU taking advantage of a tie-breaking win over OSU in Pullman to finish just ahead of them for fifth place.

The Sun Devils are my pick to finish second to USC in the South. An extra home game gives them an advantage over UCLA, which comes in third place. Arizona will be a tough out but, like UW, I see them struggling on the road. Utah and Colorado are the fifth and sixth finishers respectively.

When it is all said and done, I like the Pac 12 to produce eight bowl-eligible teams and to have at least two of those slotted for BCS bowls. Four, if not five, of these teams will be top 25 at the end of the regular season. If this were the first of the playoff seasons, I would expect that Oregon, who I am picking to beat USC in the P12 Championship, to be in that race. However, we still have one more year to wait for that and, due to the upset that I am calling at the hands of the Huskies in Seattle, the Ducks will be on the outside looking in on the National Championship game.

In pulling together these forecasts, it is inevitable that upsets will be selected ("upset" defined as a game won by a team who is considered a substantial underdog in the pre-season odds). While I realize that it sometimes feels like I'm off my rocker on these forecasts, the truth is that I only picked four such upsets in 2012 ... and I got three of them correct. Those picks were:

My game by game picks are highlighted in the graphic below. 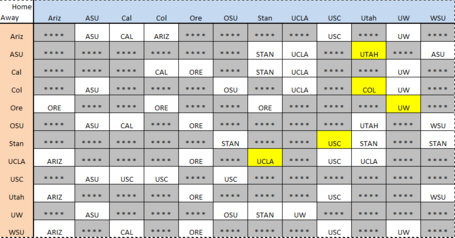 Boxes highlighted in yellow are my upset picks for 2013. I've picked five games that I think are going to go in the opposite direction of what the oddsmakers are predicting. The big one, of course, is my selection of UW over Oregon. The opening of Husky stadium, the 9 game Oregon winning streak, the presence of a new coach and Sark's record of engineering one or two major in-conference upsets per year are all good reasons to otherwise defy logic and I'm going with it.

In addition, I'm putting Stanford on upset alert twice - against UCLA in Palo Alto and against USC on the road. It may be a stretch to call the latter an "upset pick" given how strong USC is, but the UCLA game is one that falls in the middle of a lull in the Cardinal schedule and precedes a BYE week and a two week stretch against Oregon and USC. If there were a time for the Cardinal to fall asleep on a dangerous team, this would be that moment.

Finally, I have Utah involved in a couple of upsets. The first is in their favor - an upset at home against ASU. Due to a naturally growing animosity, this is a game that the Utes are circling and, well, I just don't think ASU is so good that they'll win every game that they are favored in. The second is a let down against Colorado in their rivalry game to end the season, a game where I see Coach Mac pulling out some magic to put some salve on an otherwise horrible season for the Buffs.

Now that I've laid out the entire season for you, you can set aside all doubt and anxiety that you've been carrying and move on with your life. The Gekko has you covered. I hope you've enjoyed the Gekko Files series. We'll be back later in the season with more Gekko File content when it comes time to forecast bowls and revisit past predictions. Until then, check in below and let us know what we can do to make this series even more enjoyable for both Dawg Pounders and visiting fans.