Shaq Thompson is a terror. He is a player who changes offensive gameplans. Then, when the offense sets up a plan to stop him, or slow him down at the very least, he now lines up at a completely different position. This change makes it very difficult for offenses to plan to play against Washington, as one of their best defensive players can line up anywhere and be one of the best players on the field.

In an interview with Todd Dybas in 2012 after the Portland State game Justin Wilcox had a few things to say about his versatility:

"... We're asking him to do a lot, to be honest with you. It's probably not 100% fair to him, because he's playing in our base group, he's playing nickel, he returns kicks, he's on punt; I mean, the guy's been here since August and he's real talented."

His ability to line up anywhere and still be effective disruptive is a key reason why UW's defense improved under Wilcox. Obviously the emergence of Travis Feeney and the evolutions of Desmond Trufant and Danny Shelton played big roles, but the freshman played as large a role as any. Justin Wilcox's schemes themselves also helped, and were possibly the biggest part. Especially when comparing to the wet paper bag defense that Nick Holt employed, Washington was formidable on defense last year.

The terror that is Shaq Thompson doesn't only cause issues for opposing offensive coordinators. It also causes difficulty for those who want to find out what exactly the Huskies do on defense. Depending how Thompson is classified, Washington could be lined up in a 4-2-5 nickel as their base personnel, with the upcoming sophomore being considered a safety/cornerback. They could be a standard 4-3, not a 4-3 under or over. No, they can be in an under or over front actually. He can enforce and set the edge at the line of scrimmage. When Thompson lines up over the slot receiver, does that mean UW is in a nickel? They have the same exact personnel on the field as when the offense lined up in the I with two tight ends.

With all of that said, for purposes of this article, I will define Thompson's position dependent on where he lines up. In an effort to talk about UW's base defense, Thompson will be considered a LB for most plays out of the base defense. If you can't tell, Thompson confuses me. In all the plays broken down here, Thompson is a LB. There, I think that is what I was trying to say, I hope. Whatever.

Figuring out exactly what Washington's base defense is took a little bit of tape-watching. When facing Washington State, it was impossible to find out what the defense was, because with so many receivers on the field, the defense was almost never in the seven-man front look. I decided to take a look at an offense that uses a pro-style offense that wasn't Stanford. Stanford uses so many heavy sets that UW often lined up in a 5-3, (Or a 5-2 depending on Shaq) with the cornerback or safety on the LOS with no receiver on his side. The D will then have nine (!) men in or very near the box. Here is an example of UW using the 5-3 with Sean Parker lining up in the 8-technique. 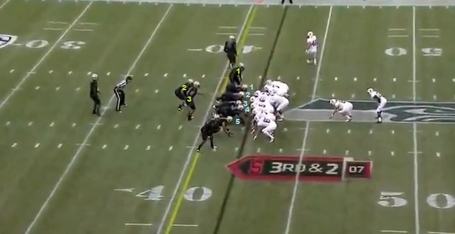 This is really similar to the "bear" front that is used by almost every team everywhere, but UW went even heavier by replacing the Will LB with a DE. The bear is essentially a 46 defense that Mike Ditka used with the Chicago Bears to create the Monsters of the Midway. Bear front used by the Bears to create monsters.

But, what is Washington's base defense? There are no teams that use a 5-3 alignment as the core of their defensive philosophy. One key element to the Husky defense is the fact that it is a multiple D defense. While there is one base package they use more than others, it doesn't mean they don't shy to not only other formations or personnel packages. For now, the focus will be on determining what exactly the base defense is. Later, I will try to take a look at some of the different fronts that UW uses.

The Oregon State Beavers run a very pro-style offense. This should simplify the process a little bit.

First defensive snap, OSU lines up in a singleback set with 12 personnel. A refresher: personnel groupings are named via the number of RBs and TEs, respectively. Using math you can then determine the number of receivers. 12 personnel would mean one running back and two tight ends. With five potential eligible receivers, there would be two wide receivers on the field. Five minus one minus two equals two. There is your maths for the day.

Washington responds with a 43 look (Shaq Thompson is a linebacker, the Will to be precise).

Because OSU overloaded the left side of the formation with two WRs, the defensive backs are jumbled a little bit. Justin Glenn is off the screen playing a deep middle while the LCB who I believe is Marcus Peters is still over on the left side of the defensive formation. This indicates it is a zone as he did not follow the WR across the formation. The LBs appear to be in underneath zones during the play, but it is very difficult to tell. Washington appears to be playing a sort of single-high coverage, but again, difficult to tell.

Later in the game we see a 100% pure 4-3. No shuffling to counter different formations by the offense. No stacking of the box by bringing down Parker of Glenn (which is done a lot, usually in single-high defensive scenarios or the aforementioned bear front).

This is in response to the 12 personnel by OSU on 2nd and 6. Washington uses mostly 43 but mixes in some 3-4 looks as well, but sticks to 4 down linemen and three backers most of the time.

Two plays after the last screenshotted play, we see the 3-4 look:

After all this talk about different formations and personnel, what is Washington's base defense? Well, Ted Miller of ESPN asked him.

"When you ask Washington's second-year defensive coordinator Justin Wilcox to describe his base scheme, his answer comes down to ‘somewhere in between a 4-3 and a 3-4,' which means it's got a little bit of everything.

‘This day and age, I think all defenses are multiple."'

It wasn't exactly uncommon knowledge that Wilcox wanted to change Washington's defense to a 3-4, but the personnel didn't exactly mesh. Josh Shirley is the prototypical speedy, undersized weak DE pass rusher, but doesn't have the size to be a Jack LB on an every down basis. Travis Feeney is a good Will for the 4-3, but if he played the same position in a 3-4, he would have to clog more holes and take on more linemen in the trenches, something a converted safety would struggle to do, at least at first.

Then there is Shaq. He is the queen in chess. He can do anything and everything except line up as a D-lineman. Shaq Thomspon defines Washington's defense. He is multiple: line him up in the slot, on the line as a LB, off the line as a LB, he covers speedy slot receivers in the nickel. It helps that he is a Second-Team Freshman All-American, five-star recruit and All Pac-12 honorable mention.

Remember the first screenshot? Shaq was lined up off of the LOS as the Will 'backer. Here is is on the line of scrimmage as the SAM in a 4-3 Under alignment. This is literally the very next play. He must play the role of an enforcer, setting the edge and stringing the play along the sideline in case of a run. In case of a pass he probably has to cover the TE, but different play-calls will cause different assignments, obviously.

Here is Thompson in the slot, same drive, only a few plays later:

I set out to determine what kind of defense UW usually put out there. I ended up with too many answers. base 4-3, 4-3 Under, 3-4. Like I said before, Shaq defines the Husky D: multiple and versatile.

Thanks to Mocking The Draft for putting together the videos of UW's defense. It makes it a heck of a lot easier to break down the defense.