ASJ — the Crime and the Punishment

The book closed on ASJ's legal challenges today, but the punishment has yet to be served.

Share All sharing options for: ASJ — the Crime and the Punishment

On Monday, the court handed out its punishment to Austin Seferian-Jenkins following his summer-long struggle with a DUI charge dating back to the March 9 incident in which ASJ was involved in a single-car accident and ended up registering a .18 BAC on a breathalyzer test at the scene. Seferian-Jenkins received what could be considered the "minimum punishment" following his guilty plea: 1 day in jail, $695 fine and five year's probation. So, ASJ has had his day in court.

Up next? His day in Sark's office.

Much debate has occurred in these pages as to what the right punishment for ASJ ought to be. Really, it's been raging for the better part of four months and was only amplified when word broke about Kasen Williams' little incident in Chalen County (Kasen's incident, just recently reported but actually closed back in May, also resulted in a $695 fine). Given this debate, I thought I'd chime in with some of my own thoughts on what football punishment ought to await ASJ.

As I begin, it is important to note that ASJ has already suffered significant punitive actions administered by the staff. He was suspended from all team activities the day after his initial arrest and he has, no doubt, been subjected to the kind of physical ... errr ... training that would make Navy Seals blush. Still, most of this punishment has been doled out outside the purview of a litigous and bloodthirsty fanbase. We want our contrition, dammit, and we won't rest until we've seen it!

The hard part about situations like this is not determining if a player ought to be punished (of course!) but how to dole it out. This is where coaches earn their pay. And, of course, every coach has his own methodology for determining such punishment. In fact, I believe that each P12 coach would handle this situation differently than any other coach. To demonstrate this idea, let's run through a little exercise. Imagine that there were eleven other ASJs, one on each P12 team. Let's also imagine that each of those ASJs committed the same crime on the same day with the same result. How would each coach of punished him? Let's see:

Stanford: Suspended for one-half of one game against Sacremento State and forced to do 50 community hours on campus in Eugene (you know, to see how the poor / dumb kids live).

UCLA: Physical labor until he pukes, runs off screaming something about "dirt bags" and "ditch tradition," or dies. Whichever comes last.

Arizona: Cleanup crew for "Burning Man" and a karaoke night out with Rich Rod that includes a duet of "Country Roads, Take Me Home West Virginia" (and it better be in key or we do it again).

USC: Banned from post-game sing-alongs and no more stipends to parents for off-campus housing.

WSU: Who knows, but it no doubt involves bear hunts, water deprivation and locked tool sheds.

Utah: A weekend banishment to a BYU dorm, fully compliant with the honor code.

Colorado: The only fitting punishment is to actually have to play for the team.

Cal: The penance is to moderate a Cal Golden Blogs debate on "The Pros and Cons of Being Tosh."

Oregon: Punishment? Are you serious? Well, if we must ... how about writing "Win the Day" on the grease board 100 times and having to don the Roboduck costume for the half-time show of the first home game? 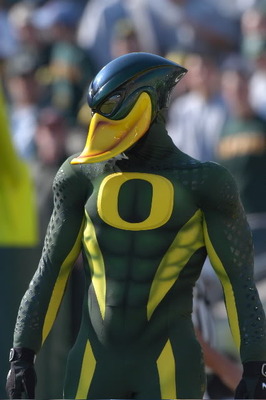 Like beauty, appropriate retribution is all in the eye of the beholder. And, as we have learned from the lenient sanctions recently levied against Oregon — sanctions that were more a rebuke of Chip Kelly than a punishment of the program — there is a movement underway to ensure that not only does the punishment fit the crime but that collateral damage is minimized.

That leads us to ASJ and the right punishment for him at UW under Coach Sarkisian. Four months ago, I was absolutely focused on a 2-game suspension including missing the home opening of the new Husky Stadium against a top 25 team. I couldn't have cared less about the "internal punishment." I wanted a message to be sent and the integrity of the Husky name — integrity that has had to be rebuilt over the last many years — to be held intact.

If I think hard enough about it, what I really want is Sark to levy an effective punishment under what one would consider a more contemporary set of assumptions. The goals of the punishment should serve to:

1. Help reinforce for ASJ the standards and expectations placed upon him as a player AND a leader at the UW.

2. Send a message to all others on the team that certain behaviors will carry with them certain repercussions, even when 5-star All-American candidates are the offenders.

3. Demonstrate for the fan base that the rule of law is alive and well within the program that we are all so heavily invested in, and of which we have each personally observed the implications of the decay of discipline.

4. Attempt to repay or to give back to the community something of value in consideration for the damage and costs that his actions have burdened us with.

5. Teach ASJ, and others around him, an important life lesson.

Does Sark need to suspend ASJ from two games to meet those goals? What about one game? What about one-half of one game with no participation in pre-game activities? I don't know about any of that, but one thing is for certain, none of those punishments is sufficient if you want to meet each of the five objectives laid out above. How does holding ASJ out of the Boise St game teach him about the severe consequences that come about as a result of drunk driving? How does it benefit the community to have him miss that game?

Sark could certainly do it and be justified in doing so. But has he serviced all of his objectives in doing so? And, does the team deserve consideration in this? Ought they be punished by having to go to battle against a top 25 team in the grand opening of Husky Stadium minus one significant competitive advantage? Is that fair? Does that serve the purpose? (I think there are rules you learn about paragraphs comprised of all questions while you are in journalism school. Good thing I didn't go to journalism school.)

I know that arguments can be made around a lot of different punishment scenarios. I also realize that the most heated subject will be related to the idea of a game suspension. Lots of fans will point out that other programs do suspend their off-season offending players with similar suspensions. However, what they won't admit to is conveniently timing those suspensions to correspond with non-challenging games. Shayne Skov, also arrested for a DUI a year ago, received a one-game suspension ... but it was against San Jose State. The situation and circumstances all matter in determining this.

Regardless of what the coaches ultimately do, I think we can all agree that the punishment can't be isolated to just a game-related consequence. Sark, who presumably has already meted out most if not all of Austin's football-related punishment, must strive to strike the right balance, meet the five objectives and protect the interests of the program as a whole in determining ASJ's fate.

What do you think? What would you do about ASJ if you were in Sark's shoes?