Basketball is the sport I am most familiar with when it comes to playing. When it comes to X's and O's, and "Reading A Defense From Your Couch," football is more my strong suit. If you are not a "round ball fan" then bear with this analogy, it actually makes sense if you think about it. It makes sense if you don't think about it either, so it is a sense-making analogy that I am making, if that makes sense. Football will come in a little bit, I promise.

Bill Walton said in a broadcast something that stood out to me. Walton has said a lot of things that cause me to think; when he does a broadcast I end up more confused than when I started. He said something to the effect of, "Basketball is a game of minor accomplishments that add up to a grand result." I don't remember the actual words and I am not going to go through every one of Walton's broadcasts (If I could find them) of UW's games to find the quote. My brain may tie itself in a knot. Only Bill Walton could cause a brain to tie itself in a knot. A brain is not string-like and is not tieable.

When Andrew Andrews slashes into the lane for a layup, it is a feat that is worth two points out of over sixty. It is inconsequential relative to the grand scheme of the game, probably.

The same thing could be said about each individual movement within a play. There are numerous times when I have had the ball near the top of the key, dribbling, while my teammates cut through the lane. If I dribble at the wrong moment, which oftentimes isn't under my control as I have to keep my dribble alive, I could miss an open cutter.

Imagine this sequence of events: I receive the ball at the top of the key and start dribbling. Bounce, bounce, bounce. You cut from the baseline to the hoop and your man is left in the dust. Right as you make it past your defender, I release the ball, beginning a slow dribble on the ground.

We make eye contact, both of us know that you have a dunk (in this scenario you are 6'5" and can hop) if I can just get you the ball. One problem: while I was dribbling and surveying the floor, I dribbled at precisely the wrong moment. I see you, I want to get you the ball so you can throw down a 180 reverse, but I have to wait for the ball to bounce up to me before I can get you the ball. By this time the defender gets time to recover and is now trailing you. There is still a passing lane, but it is closing as another defender sags into the lane, pinching you on your cut. By the time I get finally get ready to pass, you are double covered. This all happens in a second and a half, which can be the amount of time a dribble happens. The team missed out on two easy points (yes, the 180 reverse is easy for you) because I dribbled at the wrong moment.

If the LT Micah Hatchie's kick-step is an inch too wide he could be out of position to stop an inside pass-rush move. The DE/Jack LB could then reach Keith Price early and he could fumble the ball away after being blindsided, then Washington could give up a safety or a defensive touchdown because they were backed up in their own endzone. Micah Hatchie's kick-step was one inch too wide.

Washington needs to get points out of this drive. The clock is winding down on the third quarter; the game clock actually expires before Sankey even receives the handoff.

Washington is lined up in 21 personnel: 2 RB and 1 TE. Sankey lines up behind Price as the lone back, with Kasen Williams lined up wide to the left, with trips tight to the formation to the right. The three players that make up the trips are Jonathan Amosa, Austin Seferian-Jenkins and DiAndre Campbell inside to outside. Left to right, the O-line lines up Hatchie, Charles, Drew Schaefer, James Atoe and Ben Riva. Price has his hands right by Schaefer's danglies, indicating he will take the snap from under center.

(Click images to enlarge. You will have to for some of them. Also, most browsers allow you to zoom in using ctrl and +) 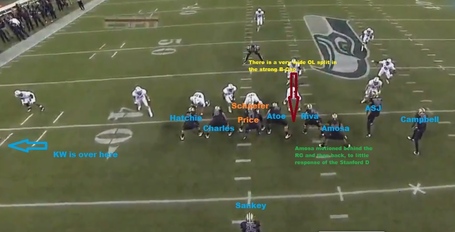 Stanford responds with 34 personnel. They aren't lined up like a 100% traditional 3-4, with every DL 2-gapping. The following screenshot will show the defensive alignment and all gap assignments will be with orange arrows. For example, the Mike linebacker (James Vaughters) is lined up in a 4-tech, head-on with Riva, but off the line. He is assigned to the B and C gaps on the strong side.

Chase Thomas is lined up across from ASJ as the SAM.

Again, questions on what you see up here can be answered in the comments, on Twitter, or if no one responds, Google should eventually get you some answers. But hopefully someone can answer your questions.

Here is a diagram of what the blocking assignments are for the play: 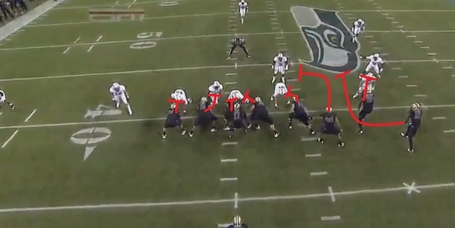 What the offensive line splits made me think was that a run was going to go to that gap. That may still have been correct, but it had an unseen advantage because of where the defense lined up. What the extra wide split did was allow Riva to get on the outside shoulder of the 3-tech and push him away from the play-side and give Sankey a nice hole to run through, in the D-Gap.

Essentially Sankey has two lead blockers in Amosa and Campbell. Amosa has to take out the Mike while Campbell has the job of blocking out the corner. If ASJ missed badly on his block here on the SAM, the whole play would have not happened. Sankey may have gotten a first down because Campbell may have helped to clean up the mess.

Looking at the assignments, the two key blocks stand out: Riva on the 3-tech and ASJ on the SAM. Both of those need to be executed perfectly to make the play work, and they are.

Once the ball is snapped, Sankey sets his feet and takes a step. This mess has already started in the trenches: 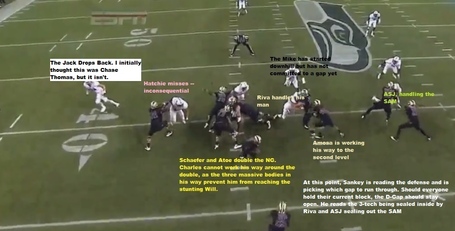 The stunt by the Will shows that the WDE definitely had the B-gap on their side. Had the run been to the left, and Hatchie actually not whiffed on the block on the DE, this play would have been moderately successful. There is no way of telling if Sankey would have made every guy miss as well, but it would have still been a successful play in that the first down would have been made.

Riva's seal on the 3-Tech is not only opening a hole for Sankey, but it is clearing a path for Amosa. Amosa gives his RT a little minor chip before moving on to confront his next task. Same goes for ASJ and Campbell.

The gap that is now Sankey's read actually had two defenders assigned to it: the SAM, being blocked at the moment by Seferian-Jenkins, and the Mike. The Mike still has yet to commit to a gap, but is making his way downhill. What Vaughters (the Mike) should do next is attack the C-Gap, because his stunting Will has taken care of the B-Gap, and there is a big mess in the A that has also clogged the B-Gap. 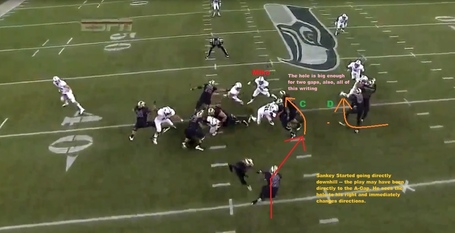 After one more shuffle step from Sankey, there are several major changes. Riva has started to lose his block on the 3-tech SDE, while Amosa has moved beyond the block and is going after the Mike. Campbell is almost around ASJ and is going to challenge the CB, who sees the hole and is going to try and muddy it up.

Riva actually begins to hold (not egregiously, not one that will be called but still a hold nonetheless) on his block. He stays in front of the DE enough to give Sankey a path.

The biggest change is the Mike's commitment to the B-Gap. It leaves the hole wide open. As shown on the screenshot, it is two gaps wide as Sankey takes the ball. It was a mistake. If he attacked correct gap (C) then he would have run into Amosa, clogging the hole. It would have delayed the run at the very least, or forced Sankey to bounce outside. 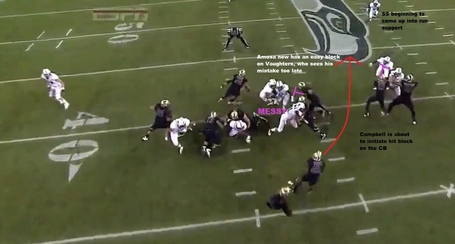 Sankey makes the final determination of where he will go; the choice is easy, so he follows Campbell and Amosa into the giant hole. What is the biggest part of this play is that Riva and ASJ have held their blocks up to this point. Riva is not holding any longer (he has gotten very low on the DE and doesn't give up any more ground.

Let me reiterate: ASJ is solo blocking All-American LB Chase Thomas. One play, one day, but it shows the potential is there.

Through the hole with only a slight hiccup. 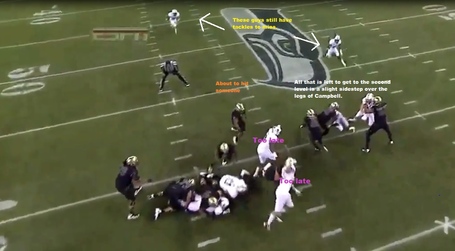 I think you know what happens from here.