Breaking down the drive that gave Washington fans hope that they could upset the Cardinal.

With summer going on and the dead months of the year upon us, I decided I would start to break down a little bit of film from last season to give y'all some love during this slow time. What better place to start than what is arguably the defining play of the season: Bishop Sankey's fourth and one dive that turned into a 60-yard touchdown.

Before we get to the fun and games of a massive play, there were six plays that led up to the eventual big play. Three of those plays are broken down within this article, should you choose to read about them and relive the glory. Click on any image to enlarge it.

Husky57 brought up a great point that not all of you know/understand the technical terms, such as A-Gap, 1-tech, Will, Mike and SAM. Mike is the middle linebacker (not used in Stanford's 3-4 scheme) but listed as the Inside Linebacker (ILB) for purposes of the 3-4. Will is the Weak-side Linebacker. (Weak side is the side without the TE[s]) SAM is the Strong-side LB.

Rush LB is used in the 3-4 and is almost always on the line and can line up strong or weak-side They usually rush the QB, sometimes be dropped back into coverage. There are several terms but Rush LB is one of the most common.

For the Gaps and techniques: use these charts (courtesy of Football Guys).

If you have any other questions about what each position is/does, ask in the comments section or hit me up on Twitter.

Coming off of a pick-six off of a deflected screen pass, Steve Sarkisian doesn't do the typical "screen pass to build his quarterback's confidence" or have Keith Price hand the ball off. He instead calls for play action with a seven-step drop.

Washington starts in 21 personnel (two running backs, one tight end) with Sankey behind Jonathan Amosa offset in a Strong-I formation with Austin Seferian-Jenkins lined up as the tight end on the offensive left (strong) side.

You can see the linebackers creeping up to indicate a weak-side blitz, with All-American Chase Thomas coming off the right edge - the offensive right.

The protection slides right in accordance with the blitz shown, with ASJ running a route, there are only five offensive linemen and Amosa to account for seven potential rushers. It would be unlikely that all seven would rush in an all-out zero blitz (no safeties up top) but possible. Regardless, every defensive player has to be accounted for; Chase Thomas cannot be left alone, no way, no how.

So it ends up not playing out like a weak-side blitz. Nickel cornerback Usua Amanam comes off the left edge and LB James Vaughters blitzes the strong-side A-gap between the center and the guard.

The middle ends up overloaded with four rushers all to the left side of the center, Drew Schaefer. Schaefer doubles the weak DE because of the protection slide to the right. Micah Hatchie is shoved towards the LG, probably Dexter Charles, and knocks him off-balance. When Vaughters hits the A-Gap, he goes straight into the chest of the already-stumbling Charles, who goes backwards.

When Price fakes the handoff, Sankey runs straight into the back of his left guard, Charles I presume, who has been shoved into the backfield by Vaughters, and the strong DE has stunted around the defensive tackle and the only thing that slows him down is Vaughters stumbling over the fallen Sankey. Price at this point either has to float the ball to a hot read or throw it away. He backpedals and releases the ball to the top of the screen, out of bounds in the general direction of Kasen Willams.

Following the busted protection on the previous play, Sarkisian dials up a play that could help lessen the pass rush: a RB screen.

UW starts in 11 personnel (1 RB 1 TE) out of the shotgun with Sankey to Price's left, again the strong side with ASJ lined up at TE. The WR up top (can't tell whether it is Jaydon Mickens, Marvin Hall or DiAndre Campbell, I think Hall) motions around behind Price. The ball is snapped right as the WR clears Price.

As you can see, Stanford again shows blitz. Their front-seven's versatility really helps them to disguise blitzes, as anyone could come at any time. This time, Stanford shows five rushers and brings five.

The left side (offense's point of view) of the front seven, a LB (Chase Thomas) and DE, stunt but it is inconsequential to the play. The right side of the line play like turnstiles and let their men past them. Sankey catches the pass from Price with some room to run.

Sankey is eventually brought down for an eight-yard gain, bringing up third-and-two.

Now Washington faces a crucial third down. With the third quarter almost at a close and trailing 13-3, UW needs this third down. They turn to their most consistent offensive player of the season in Sankey.

Washington lines up in 12 personnel with an unbalanced line to the right with both tight ends. 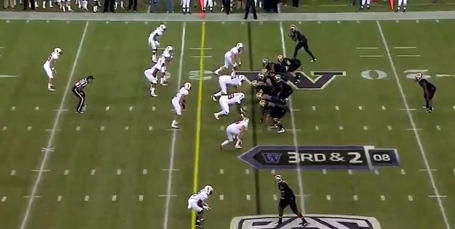 Williams is at the bottom of the screen and Campbell is up top. ASJ lines up next to Ben Riva with Evan Hudson lined up as the second tight end about two feet behind ASJ and on his outside shoulder.

Stanford responds with a base 3-4 look. Chase Thomas is the WDE and plays almost no factor, lining up wide in a nine-technique. Micah Hatchie easily takes care of him.

C Drew Schaefer and the LG Dexter Charles combo block the 1-tech looming over the weak A-gap. James Atoe, at RG, gets enough of the three-tech to allow Sankey to pass by the space where Ben Riva vacates. Riva immediately goes downhill across the play and cuts the Will. Hudson takes on the Rush backer and ASJ essentially lead-blocks. 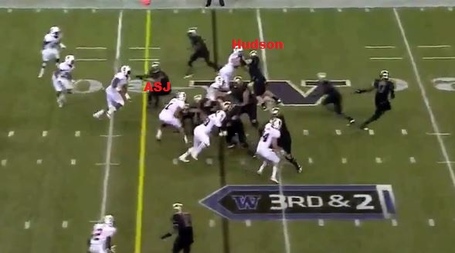 Schaefer then moves beyond the DL and helps Riva at the 2nd level with the Will. ASJ completely whiffs on the ILB Vaughters. Hudson and Riva's men both release in time to get a hand on Sankey at the line of scrimmage, but that does little more than slow Sankey down as he hits the hole full-force. Sankey eventually forces his way through the mass of arm tackles before being hit by two more white jerseys and coming to a stop a yard past the first down marker.

Let me know you have any suggestions that I could use in further tape analysis to further your understanding of the plays.