HELLO...HEllllllo...hello. It must be the offseason.

Sorry I've been hard to reach. Turns out the rest of the world doesn't give a squirt.

Coaching power shifts in Pac-12 - NCAA Football - Sporting News
We all love lists ... and the Sporting News has their own ranking the coaches in NCAA Football. Needless to say, the staff of TSN wasn't too generous to our lovable .500 coach. Debate below.

Sarkisian on the spring, injuries and moving forward with ASJ | UW Huskies Insider - The News Tribune

That same lovable loser had a lot to say about the state of his Washington team as he looked back on the spring in his most recent press conference. Todd Dybas has the details.

Q&A: Washington's Steve Sarkisian - Pac-12 Blog - ESPN
The Stanford/Pac12 ESPN blog held their own Q&A with Steve Sarkisian. If you look closely at the tremors inherent in the typeface of the story, you will note that Gemmell had a very difficult time not asking Sark how good he thinks Stanford will be this year. Of course, he also had no problem avoiding the question as to why Sark thought that the Huskies were able to beat the Cardinal's collective ass last year.

Washington Huskies spring wrap - Pac-12 Blog - ESPN
Since I'm on the subject of the Stanford/Pac12 ESPN blog, here is Gemmell's write up on the state of the program following spring ball.

Washington Huskies Basketball: Losing Moser Is A Major Blow.
Our friends at the Husky Haul think that losing out on Mike Moser was a major blow. Maybe you agree?

Top men's basketball assistant leaving Iowa State | The Des Moines Register | desmoinesregister.com
Losing out on Moser looks bad for Lorenzo Romar ... but getting in on a bright young coach like TJO may help lessen the sting.

Timeline Photos | Facebook
This Facebook site, called Vintage Seattle, found an old sketch of a design for Husky Stadium that included some interesting features that didn't make the final cut. This is pretty cool. 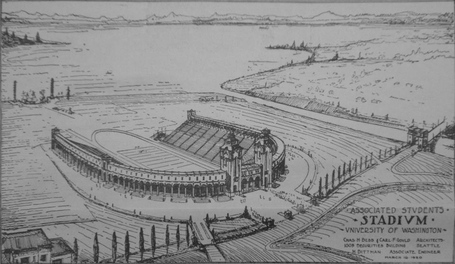 Husky men and women sweep Windermere Cup
Too late, I know... but the dominant Husky Crew team ... actually "teams" ... swept the Windermere Cup in a show of athletic dominance not seen since since Michael Jordan posterized Manute Bol.

Fearless Nate Robinson is key to Bulls' impressive run
If you've been watching the NBA playoffs, it is hard to not notice the name that Lil' Nate Rob is making for himself. Not only was he the hero of the Brooklyn series, but he led the Bulls to a Game 1 upset of Miami. The series is now even, but N-Rob is just getting going as he seeks to guide the Bulls to an upset of the defending champs and to position himself for a little free-agent coin during the offseason.

This is the offseason, so things are definitely starting to slow down around here. But there is always something worth discussing at the Pound. As Ben noted yesterday, the Huskies - who were once a shoo-in - lost out on the transfer of Mike Moser who, instead, chose his home state Ducks. This is no doubt a blow to what LoRo had planned for in 2013-14, but it may also signal a continued degradation in his status among prospective recruits. Has LoRo lost his recruiting edge?