Just Another Month in Paradise?

Alas, I'm not the only Husky in Memphis.

Share All sharing options for: Just Another Month in Paradise?

Transvestite farmers? Seen it. Pickup bed hot-tubs? Done it. Fried butter on a stick? Please. Ate it. Rednecks smoking cigarettes while weight lifting...at 7 o'clock in the morning ... central time? That is a morning ritual, my friends.

There is a lot to like about this town and an abundance of oddities is among those things. But one thing you would hardly expect to happen is to have a chance encounter with a Husky. Much less, two. Even much less, three (kind of). All in the same month.

It happened to me.

Encounter #1 is one of those things that happens to just about everyone at one point or another and is not all that remarkable if your perspective is that of a West Coaster who has these experiences often. But in Memphis, having it happen to you is as rare as seeing an '84 Impala without balding tires on East Parkway Avenue (it is a Memphis-thing...just go with it). On my way to work a few weeks ago, I came up behind a nondescript black Audi A4 cruising down Poplar Avenue. My eyes immediately went to his license plate, not because I am in the habit of looking at people's license plates but because something seemed a little odd. You know the feeling. Some call it "fail-dar". Others refer to it as a "sick sense". In the same way that every guy will never miss in a crowd the lady with the smoking hot body and a face that not even a mother could love, I noticed that license plate. Something was just wrong.

In this case, the Audi was sporting a plate that only mine eyes could appreciate. The familiar white and blue scheme with the silhouette of the mountain behind the bold six-digit numbering. The man, in the black Audi, was sporting Washington plates on the streets of Memphis, Tennessee. Encouraged by the plates, my mind immediately went to "could he be a Husky"? Because Tennessee does not require front-placed plates, many a Tennessean proclaims his collegiate allegiance by posting the plate of his alma mater right under his grill. Though he was not yet sporting Tennessee plates, I decided to follow a hunch and see if I could get a glimpse of his front plate. I buzzed around him by passing him on the left and a quick check of my passenger mirror confirmed what I already knew to be true ... his "W" against a faux chrome plate proclaimed his status as a Husky enthusiast. I decided to greet the man the way any of us would another Dawg. I slowed so that he could come even to me on my right, rolled down my window, flashed a grin that would shame Pat Sajak, and threw up my Dubs.

The reaction wasn't exactly what I was going for. In hindsight, I should have thought better about flashing signs anywhere in the vicinity of Memphis city limits, even those that are as benign as a "Dub". My fellow Husky, already eyes fixed on me given the curious grin on my face, snorted coffee out of at least one of his nostrils upon first notice of my Dub, immediately hunched over his steering wheel as if he was ducking something and then proceeded to accelerate to something well past the legal speed limit on that municipal road. Like I said, not exactly the reaction I was looking for. Could you imagine if I had flashed him the Oregon "O", especially if he understood sign language? 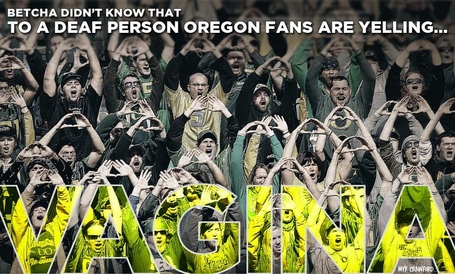 Encounter #2 happened not long after that ill-fated drive-by on Poplar. I was turning into a parking lot near the Memphis court house (Memphis cops LOVE handing out traffic violations), when the damnedest thing happened. At the exact moment that I was making the right turn into the driveway to enter the lot, my peripheral vision picks up a black and purple blur buzzing into the trajectory that my Jetta is committed to. A two-handed thump on the hood of my car concludes the momentary stupor that I was in and I looked up to see a young Asian guy in a black coat and a purple tie smiling and waving gratuitously in my direction. He signals to me to roll down my window. So I do and he says "hey, are you a Husky?". I reply, "Yeah. You?" He replies, "Yes! I went to Med School there. Graduated in 2006." Impressed, I ask him if he likes to watch the football games. He says "Of course!". But, before I could ask him if he'd like to join me a few friends that I get together to watch college football, he turns and says "see ya!". Odd, but not really by Memphis standards.

The last encounter happened in a spot where Husky fans often run into one another: Starbucks. In this case, my wife and I were stopping over to indulge in our Sunday morning ritual. 8:45am: Gather children, load them in the car and head out the door. 8:55am: Wife walks kids to their Sunday School classes while I keep the motor running near the back door (being careful as to avoid any routes where I may run into a priest and have to account for my absence from Mass). 9:03am: Arrive at Starbucks and place orders for a grande Pike Redeye and tall no-water, whole milk Chai Tea Latte. 57 minutes of pure, kid-free peace and pleasant adult discourse ensues. On the way out, we pass a presumably retired couple who we had often seen at this same location on a Sunday morning. Today, the gent was sporting a classic UW hoodie sweatshirt. A bright purple number with "University of Washington" scribed in bright gold lettering. He matched that bad boy with pleated khaki Dockers and brown loafers. Never one to miss an opportunity to bond with a fellow Dawg, I approached the man. The familiarity bred from a dozen encounters in the same spot over the previous months made the introduction not so awkward and I mentioned to him that I couldn't help but notice his sweatshirt as one doesn't see too many UW logos around Memphis. He looked down the front of his hoodie and back up at me before saying "Yeah, I didn't really have anything else to wear out this morning. My son-in-law went to law school there and got this for me a while ago. I've never been up there, but I kind of like the colors." Disappointed as I was, I threw up a Dub - I'm sure he thought I was giving him the Vulcan symbol for peace - and I said, "fair enough, Dawg. See you next time". And I walked out the door. 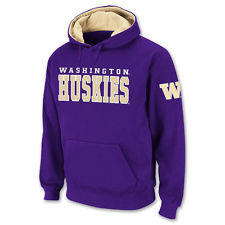 Huskies are everywhere if you only open your eyes and care enough to find them. Many of you have traveled to far away lands and, doubtless, encountered fellow Huskies in the oddest of locales. Maybe some of you even have some stories to share in the comments below. Regardless, relish the heritage that you possess and the bonds that exist with other Dawgs. It is an inestimable gift, even here in the great mid-southern city of Memphis.