Husky Stadium Update ... I can Almost see the Turf

I don't even know where to start. The place is really looking like a sport's venue now. The crew if finally clearing up the field space, and you know what that means!

Share All sharing options for: Husky Stadium Update ... I can Almost see the Turf

First off, I want to give a shout out to Lear. This is in no way meant to replace what he did, although at the time I type this I realize I'm just saying this to make myself feel better.

I feel a little better now.

Since I'm in my last semester of law school, I don't have a ton of free time ... so if you want to see how the schematic lines up with the current state of the stadium, send Lear and email. Otherwise, enjoy the pictures. 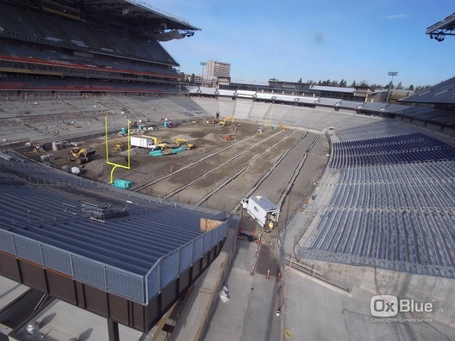 I'll start by saying, if haven't yet noticed, both goal posts are in place. Now ... you don't have to use as much of your imagination to try and figure out where exactly the field is going to placed. But, if your still having trouble figuring out where it is, try this picture. 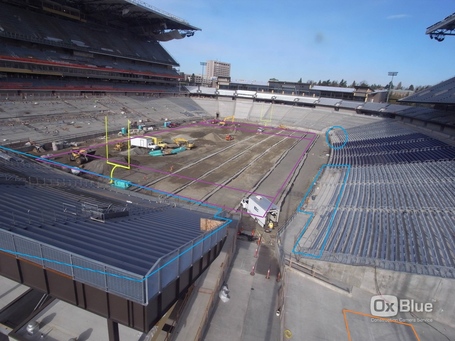 Now, my lines are probably off by a bit, but hey, it's all I got ... mostly .... Alrighty, there's a couple of cool things you might notice on this particular image if you don't happen to peek on the OxBlue website every single day. First of all, look down at the bottom right corner. What you'll notice is that the workers filled the entire portion up with concrete. For a couple of weeks, there was a gaping, random rectangular hole missing in the middle of it ... that's marked in orange. Next, you'll notice that there are various sections where the bleachers have not yet been put up. I'm not sure why, but I can tell you one thing, I've been waiting for the bleachers on the East Stands to be put up for what seems like ages. If you were wondering, those are marked in blue. 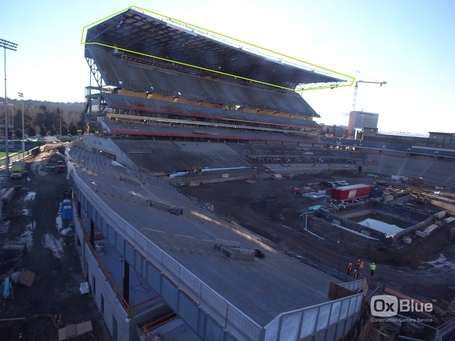 There's a ton of stuff that has happened since this photo was captured, but I just want to focus on one thing in particular: the under-side of the roof on the South Stands. This is what they looked like before the serious coat of paint, and whatever else they did to the belly of the roof, was begun. Over the following months, a very arduous and painstaking process was undertaken. it involved placing a notably literal amount of protective tarp-like material on the underside of the roof, spanning two sections of trusses. Then, whatever those guys did up there is a mystery to me ... the tarp was needed to keep the substance being sprayed on the roof off of the nice new bleachers, stands, and press-boxes ... a necessary precaution. Here's what that looked like. 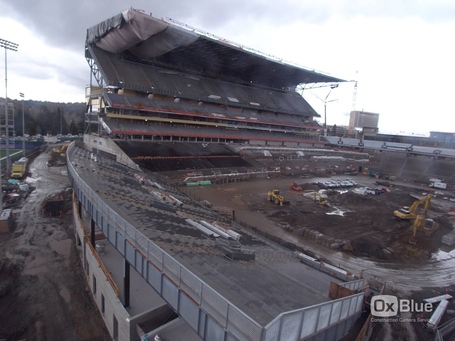 If you look closely, you'll notice that something has clearly fallen onto the tarp. This begs the question: did anybody have the urge to push their co-worker off of his riggings and down onto the tarp? Talk about a thrill. I would have been tempted. Talk about the ultimate April Fool's joke. (In case you're wondering, I checked the camera on the first of April, and none of the tarps were up. I guess the foremen saw that coming too ... to bad.) Anyways, here's what it looks like now. Now the underside should be completely waterproof, sun proof, and I wouldn't be surprised if the stuff they put on makes it bird proof as well ... at least I hope so! I hate getting crapped on. 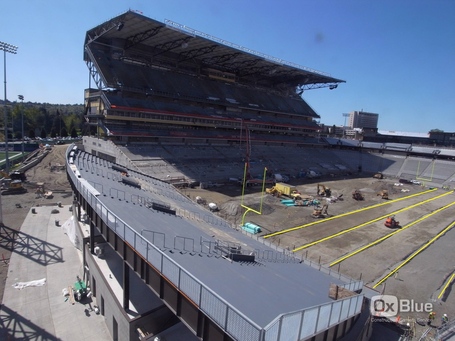 What you should also notice from these pictures is that the field is being cleared. FINALLY!!! You might also notice what appears to be gray lines, spanning the length of what will soon become the field. (See my first picture above) I marked them in yellow ... if you couldn't tell. Apparently the engineering for the specific kind of "field surface" the Dawgs are putting down requires drainage ditches every 10 to 12 feet. So the workers dug some ditches that were about 3-4 feet in depth, placed down some felt, some pebbles, the drainage pipes, and then some more of that grainy sand. This'll hopefully keep the ground dry, as there doesn't appeal to be any kind of slope originating from the center of the field and gently sloping down towards the edges.

Now I'll just finish up with some before and after pictures so you can appreciate the amount of work that's been done the past couple of months. 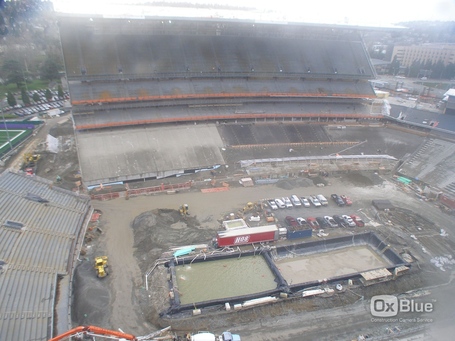 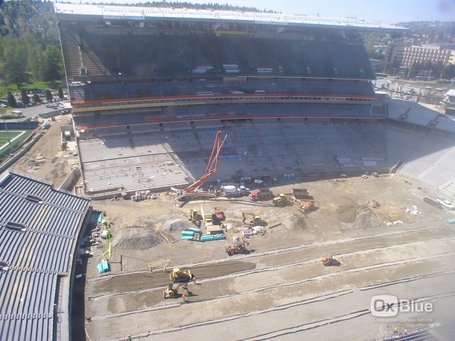 The concrete stands are nearly complete; the edges of the upper stands are getting close as well. I can only imagine what's going on inside the stadium ... it's too bad we are severely limited in what we can glean from these global pictures. There's a lot more than the changes I've mentioned. I thought it would be better to discuss what you see in the comments section. (I swear it's not cause I'm a naturally lazy person ... smirk) 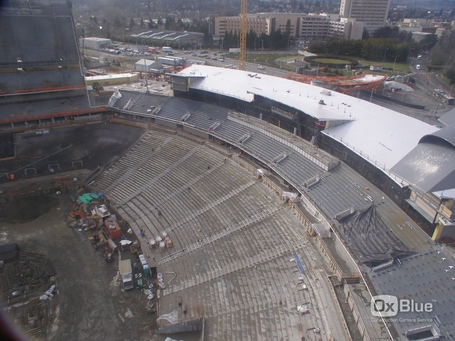 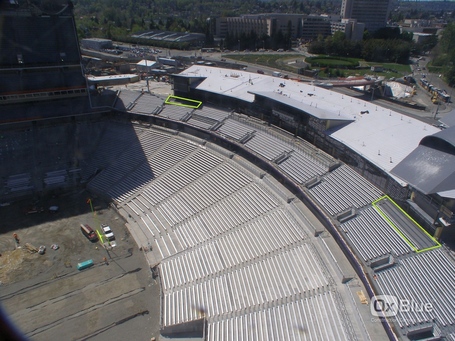 First of all, I noted a couple more places where the bleachers are missing. Now, I point your attention to the Football Operations Building. The glass has been put on, and it is reflecting the stands. I thought it looked really cool ... hope I'm not alone. I can't wait for the workers to begin working on the verandas on either side of the FOB.

I am salivating right now, really ... this thing is so close! Be ready for September Dawgfans. The Stadium's gonna be rockin!