For those of you who don't know me, my name isn't actually Gekko Mojo. Shocking, right? Gekko is actually my fourth moniker here on the Dawg Pound. The other three have all been banned in one way or another over the years and have yet to escape the digital purgatory that is our SB Nation penalty box. I'm happy to report that the fourth try was the winner and, outside of an inexplicable 3 year banishment from Bruins Nation for misspelling "Weasel", I've been on the right side of the law for long enough to have this mash up of "Gordon Gekko" and "SoDo Mojo" get institutionalized as my Dawg Pound avatar. That is ok. I kind of like the gecko licking his eyeball. Somehow that never gets old.

Anyhow, the point of this post is that I came here to make two confessions. The first I just made. Gekko isn't my real name. Hello, world, I'm Chris. My twitter handle may have given that away.

The second confession has also been ridiculously foreshadowed - kind of like how you always know who did it on Law & Order SVU. Yes, today is my birthday. My 40th birthday.

Strange, I thought typing that last line would be more cathartic than it actually was. This could be a long day.

So, here I am at Starbucks typing this - playing hooky from work - enjoying a tall Pike (which I often do) and snacking on a donut (which I never do - but, hey, I'm 40...#uck it!) - wondering how I can both commemorate the day and somehow link it back to the common thread that binds us all together.

I'm not sure I can pull this trick off.

I realize that hitting 40 is a milestone that many a Dawg before me has achieved. In fact, by the looks of our little member survey, it would appear many many of you have reached this summit before me. I kind of feel like I just climbed Everest only to find a La Quinta Inn waiting for me at the top. And a QFC.

Geez, I miss QFC. You Seattlites don't know how good you have it. There is a whole big world out there that has shit for grocery stores.

Anyway, I digress. The point I was going to make, here on the big 4-0, is that among the many interests that I have ... and I think I can fairly say that I have a pretty diverse set of them ... the one that I hold on to with the most firm grip is my love for the University and all things Husky.

I know this to be true because there is no other subject that can inspire random moments of trivial inspiration over the course of my day like the Washington Huskies. You know what I'm talking about. Those moments in your day when your mind wanders from whatever it is that you are (or should be) doing onto a subject of the random variety.

When I'm mowing the lawn - yup, I'm thinking back to that day that Barbara Hedges hired Rick Neuheisel out of Colorado and paid him all that money (which today looks like a bargain even knowing how that story played out). I actually remember exactly where I was standing the moment I heard that news.

When I'm walking from the parking lot to church on a Sunday morning, I find myself pondering what in the world compelled the Mariners to draft Brandon Morrow instead of Tim Lincecum.

While I'm standing at the corner of a bar during happy hour waiting for my Mich Ultra (hey, I'm 40, carbs count), I'm pondering the tragedy of Mark Pope and how he had no choice but to transfer to Kentucky (which worked out as that skinny white guy ended up having a more-than-could-be-expected run in the NBA).

While I'm brushing my teeth, it is hard to not relive Isaiah Thomas and "cold blooded" - the most exciting basketball play that I've ever witnessed in the history of Washington Basketball.

While I'm flossing my teeth, I move on to Mario Bailey and any of a variety of amazing one-handed fingertip catches he made along the northern sideline in that magical 1991 season.

The morning commute occasionally finds me listening to Bill King on Sirius XM but lamenting the tragically cut-short career of Brandon Roy.

Sitting by the pool watching the kids splash around is a great time for my mind to wander back to my time at school and the weekend walks I would take down to the boathouse just to be around the greatness that is our crew squad.

And then there is Beno Bryant ... quite possibly the coolest name in Husky football history. That pops in my head a lot.

I often think about Hugh McElhenny - not because I ever watched him play, but because I once met him in Las Vegas at a car wash. It turns out that his house was less than a mile from mine at the time. That, and my grandfather's favorite saying was "Shake the hand that shook the hand of Hustlin' Hugh". God bless, him.

The voice of Bob Rondeau.

The ridiculously unnecessary demise of the Dawgfather.

The gymnastics events that I attended in hopes of landing a date with one of the GymDawgs (don't laugh - it worked).

The booze cruise trips on a Saturday morning.

The lost years of Lynn Nance and Bob Bender - one big giant blur in my mind.

The soggy day in Palo Alto when a young Curtis Williams had his life cut short.

All this stuff will pop into my head at random times over the course of a day, a week or a month. While other interests come and go (and, trust me, I'm sooooo glad my wife never capitulated and got me that Aibo during my "robot" phase), the state of being a Husky endures deep within my consciousness.

So, now I'm 40 coming to grips with all that goes along with reaching what many consider the ultimate half way point. Don't worry, there is no crisis. Well, at least not yet ... but I do have this strange craving to go test drive a Maserati Quattroporte today (anybody know what kind of deposit I have to put down for that?). I don't have any great new insights or a-ha's to blow you away with. I can say that I'm convinced that when the dementia finally comes and sets in, these thoughts and meanderings on my time and experiences as a Husky will be safely tucked away and out of the reach of that degenerative tyrant.

I can also say that I'm thankful for all of the blessings that have come my way over these 40 years. For my lovely wife of 14 years. For my two perfect daughters who are rabid Husky fans for no other reason than they see how much their dad cares (see the card I woke up to below). For my two brothers - neither of whom are Huskies but both of whom feel my pain with every beat down by the Ducks or Apple Cup upset (even the brother that is a Coug). For my family and friends, who are always trying to find ways to get me back to Seattle to see a game. And to my colleagues here on the blog - the hundreds of you whom I've never actually met but feel like I've known all my life. You are my lifeline back to Seattle and to the University. And, of course, for all of the great things that have come out of the UW over the years - the experiences, the degree, the friendships, the jobs, and, of course, the athletics. What else could I ask for? 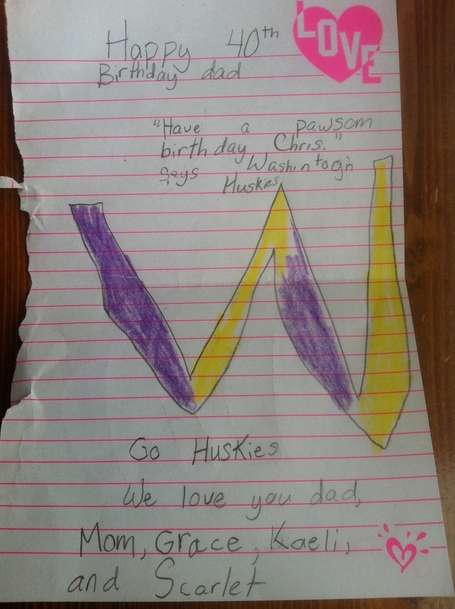