Back to the grease board. We're breaking down a play that the Huskies ran successfully (on offense!) during the 2012 season.

Packaged plays are all the rage now in college football. We touched on it in September with a play the Huskies ran to Austin Seferian-Jenkins against San Diego State, but this play is a little more complex. Not only does it have both a run and a pass built into it, but the pass element is a downfield throw, rather than just a one-step quick hitter.

On the backside, you've got Kasen Williams fading, while Cody Bruns hitches in the slot at five yards. 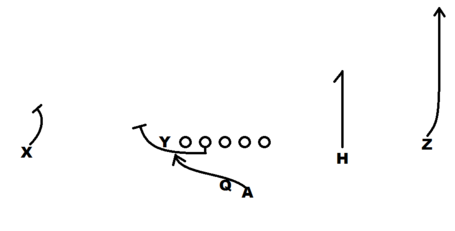 There are a couple ways for the Huskies to run this play. One (the way I don't think they run it) is for the quarterback to read the outside backer near Bruns. If he drops into flat-coverage and takes away the hitch, Keith Price gives to Sankey and they run away from that. I don't think that's the way they ran the play because that backer played the run 100%, and if Price had the option to I believe he would have pulled the ball from Sankey and made an easy toss to the slot for 5 yards, plus YAC.

The way that the play was probably run is still for the QB to read the defense, only it's done pre-snap. Price counts in-the-box defenders andwhen he sees good numbers the play becomes a run. If Cal had stacked the box, it becomes a pass with Price reading hitch to fade. If the box is stacked and the hitch is covered, your worst case is probably a 1-on-1 to Williams. Not a bad set of choices.

I'm not sure which method I prefer. Making the call pre-snap minimizes the risk of incorrect decision making, but post-snap probably gives a higher success rate -- when run correctly. You can't really argue with the way the Washington offensive staff drew it up in this case though, because as it was the give to Sankey resulted in a nice gain off tackle.

(This is an animated .gif. If it doesn't play, click and open it in a new window and it should)