Despite a slow start that had the Huskies up just four points at half, a 18-0 run in the second half propelled the UW to a 95-80 win against a lesser Mississippi Valley State on Friday night. 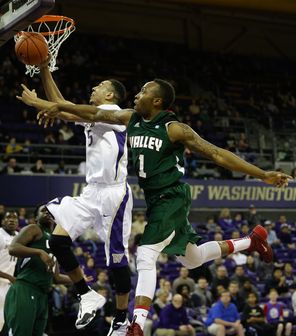 On a night where the football team was the center of attention at the University of Washington, the basketball team took care of business with a 95-80 win against the Mississippi Valley State Delta Devils.

Although they were 23 point favorites, the Huskies had to battle for longer than expected to earn the victory. Mississippi Valley State went into the half down just 4 points but an 18-0 run in the second half propelled the Huskies to a comfortable win.

At the 12:40 mark, an Anthony McDonald layup tied the game at 56. Just five minutes later, the Huskies were up 74-56, allowing the Huskies to cruise to a win and empty the bench.

Andrew Andrews and Nigel Williams-Goss led the way offensively for Washington with 18 points apiece. Andrews finished 5-10 from the field and 8-9 from the free throw line, and Williams-Goss added 8 rebounds and 5 assists on 8-14 shooting. C.J. Wilcox recorded his first career double-double as a Husky finishing with 15 points and a career-high 10 rebounds. Perris Blackwell added another double-double with 17 points and 10 rebounds.

Taking advantage of a smaller Mississippi Valley State roster, the UW pounded the Delta Devils down, winning the rebound battle 51-29. Blackwell used his size to finish 7-8 from the field and provide the UW a much needed low post scoring presence. Six players finished with five or more rebounds for the Huskies

Anthony McDonald led all Mississippi Valley State scorers with 19 points on 6-15 shooting. The Delta Devils shot 48.5% from the field and were the 7th team to score 80+ points against the Huskies this season.

The Huskies wrap up non-conference play against Hartford on Sunday at 6 PM at Alaska Airlines Arena. The Huskies began PAC 12 play next Thursday when they travel to the desert to face the Arizona State Sun Devils in Tempe.

- The Huskies turned the ball over 16 times tonight, a consistent problem for UW that needs to change for them to be competitive in conference play

- Walk-on junior Quinn Sterling scored a career high 7 points in limited minutes. Sterling was 1-1 from three and 4-4 from the free throw line.

- Washington went into the game shooting 78% from the line but that number will drop after the UW shot just 27-41 (65.9%) from the line tonight. Williams-Goss and Blackwell combined to shoot 4-12.

On a double win night for the Huskies, who impressed you the most in tonight’s win on the hardwood? Leave your thoughts and observations in the comments section below.