Previews: Zombie Offense, Defense and Special Teams; the Prediction; Q & A; 5 Questions; Husky Stadium will have a visitor from Miami; Dots 1,

Last week I mentioned that the Huskies had been outscored by the Oregon State Beavers in Corvallis 115 to 65 in their past three meetings ... well, in last week's game alone the Huskies dramatically closed that deficit to 142 to 134, a margin of 8 points ... BALANCE RESTORED!!!

It's only his second year as a head coach over in the Palouse, but Mike Leach is thoroughly annoying me. Where are the good old days where we could practically pencil in a win with Paul Wulff at the helm? That aside, a relevant Apple Cup is good for both these teams. Currently, the Dawgs lead this series, the 106th if its kind, 67-32-6.

Last year sucked. I remember I was building a deck at the time, in South Denver, and it was butt-cold outside. At the end of the third quarter I had decided to call it quits for the day. I had brought my laptop and hacked into the homeowner's wifi so I could listen to the game while I hammered away on the porch ... when I got home, which was 15 minutes away, I went to check the score. I left work happily humming since the Huskies were up 28-10, and when I got home ... the score was 28 to 28 ...

I listened to the rest of the game, but I didn't need to. For some reason, in my gut, I knew what was going to happen. Frankly, I'm still upset about it. Those Zombie Cougs RUINED my cup of Hot Chocolate.

.6 - The difference between the number of points Wazzu and its opponents have scored ... Wazzu is losing that one

21 - The number of picks the Cougs have thrown this year

28 - The number of TDs the Cougs have thrown this year

26.2 - The number of points the Cougs are scoring in road games

32.3 - The number of points their opponents are scoring when they host the Cougs

No insults intended; this is really just some gameweek fun ... so have a laugh. These quotes were removed from any relevant context that would give them any logical sense .... These quotes are courtesy of CougCenter:

On who's the better coach

I thought 2012 showed we have the better coach for perperation and second half adjustments between the two. I believe Leach will continue that pattern against Sark.

I’d much rather have our coach than theirs

On Joey Harrington and Craig Bollerjack calling the game

The bad news is that Craig Bolerjack and Joey Harrington are working the game.

Aren't we 2-0 with them calling us this year though? 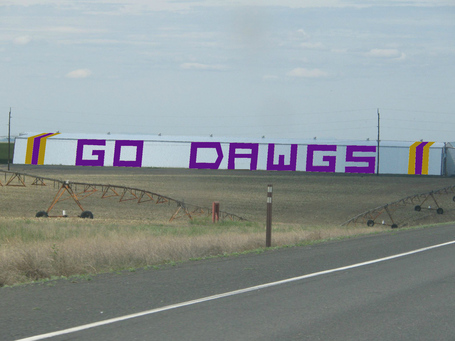 I'm okay with this ... As long as we hit him hard enough to make him close one eye and stick out his tongue, and as often as Achy-Breaky-Hanna-Montana gets photographed making that face.

On the Cougar Defense

Sark thinks we are a good defense?

He is trying to prop us up

Will the offense pick up where it left off last week? How many yards will Bishop get this week ... and will it be enough to break Dillon's record? How many backs will break 100 yards this week? Will ASJ continue to be a beast at pass blocking? How is Micah Hatchie doing? Will the O-line continue to be awesome ... for a second consecutive week?

Can the defense defend the pass again this week? How many picks will Halliday gift us? What will the pass rush look like? How many sacks will Kikaha get? QB hurries? QB hits? Forced interceptions? Will Marcus Peters be able to line up against the entire platter of Cougar Wideouts at the same time?

Can we please get this game over with so I can forget last year's game?

Man I am excited for this game. Not only is it relevant, since both teams are going bowling this season, but it's the Apple Cup. I remember in kindergarten I heard about the Apple Cup for the first time ever. The class was supposed to pick who was going to win the game by drawing a picture of the winning mascot ... since my two best friends were on opposing sides, I decided to go with whichever buddy gave me the coolest snack.

I'm sad to say that the Coug gave me a twinkie, and the Husky had already eaten his. Naturally I voted for the Cougs. That game happened to be the '89 version, and the game turned out a win for the Cougs ... however, the worst part about that ordeal, other than taking that picture of a Crimson and Gray Cougar to my dad who hated the Cougs, was the fact that during lunch my Coug buddy and I defaced all of the Husky drawing with a big L ... all I can say is that it's a good thing there's no detention for Kindergarten ... Needless to say, that's the last time I chose the Cougs in the Apple cup.

I have mixed feelings about the outcome, as far as the score and winner goes. I want to say the Dawgs are going to run away with the game, but that just doesn't feel right in my gut. No, a much closer win seems to be in store. So, I say that the Huskies win by 63. Final Score: UW 70 WSU 7

The Huskies are 16 point favorites in the game and the over/under on the game is as high as 65.5

Come on over to the game thread to have a little bit of jovial banter with fellow Dawg fans, and the occasional troll. You'll be happy you did. It opens up a half hour or so before kickoff.