Husky G/F Darin Johnson has a friend in high places and it is impacting his game on the hardwood. 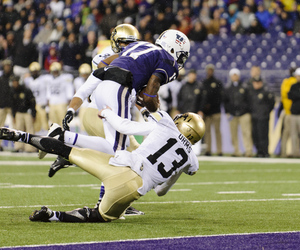 The Huskies matchup against UCLA is interesting in that it pits two teams that are generally evenly matched. The Huskies have performed better against common opponents (five of them) and are clearly better than UCLA in all of the standard and advanced offensive and defensive statistical categories. However, this is offset by the fact that the Bruins are playing at home. In predicting the outcome of the game, which area do you give more credence: statistical performance to date (including against common opponents) or home/road factors?