Road Dawgs - Evaluating the Huskies on the road under Sark

A common refrain that has built up around Husky fan sites is that the Huskies have played poorly on the road under Steve Sarkisian. Is that assessment valid? With the help of advanced metrics from Football Outsiders, we take a look and see if that's a fair viewpoint.

Share All sharing options for: Road Dawgs - Evaluating the Huskies on the road under Sark

Something you hear a lot about Steve Sarkisian and his tenure here at the UW is that his teams play much worse on the road than they do at home. Fans will cite games like the losses to Stanford & Oregon State in 2011, to LSU, Arizona and Oregon last year and to ASU this year. They'll point to wins at home over USC in 2009 and over Stanford & Oregon State last year as a comparison. And so as the Huskies try to close out the 2013 season with a flourish, there is much trepidation about their chances this Friday at UCLA and the following week at Oregon State. Is this a fair assessment of Sark's teams - do they perform demonstrably worse on the road than at home?

I decided to take a look at the issue by comparing the Huskies F+ rating with their opponents for each season Sark has been here and see how that system viewed the quality of wins and losses for the Dawgs. If you're not a fan of those advanced metrics, you should probably stop reading now, because you won't agree with how they have ranked the Huskies vs. their opponents.

I'll post a table below that lists the pertinent info - the resuts, including scores, the end of season F+ rankings for the Huskies and each of their opponents and noting which games were at home vs. on the road. Games where F+ considered Washington an underdog are highlighted in peach, and games where they were the favorite are highlighted in green; wins are listed with black text, losses with blue text. Road games are bordered in red.

The first thing you'll note is that F+ was not very bullish on how the Huskies performed prior to this year. Based on their rankings, the Huskies should have finished 2-10, 3-9, 6-6 and 5-7. This leads to two different ways you can view their rankings:

If you lean towards A), then the remaining analysis probably won't do much to convince you, because you don't buy the underlying basis of measuring the Huskies vs. their opponents. If you lean B), then read on - you might be surprised: 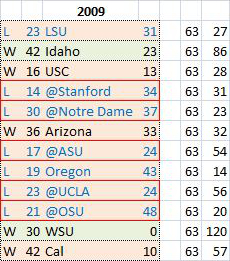 While the Huskies went winless on the road, by F+ they were underdogs in every one of those games. By their rankings, none of those losses looks particularly egregious, and while some at the time were upset at blowing games against ASU and UCLA - and both of those games were winnable - they were close losses to teams ranked slightly above the Huskies. Washington also nearly stole the game vs. Notre Dame, and they were rated significantly above the Huskies. At home, Washington pulled out the notable upset win over USC, but the win over Arizona was nearly as big of an upset, and the margin of victory in the win over Cal was impressive. The Huskies also played LSU tough despite being a significant underdog.

On the whole, it doesn't appear that Washington played poorly on the road in 2009, but they did appear to play somewhat better at home as they didn't lose any games they shouldn't have, and played above their rankings in 3 of them. 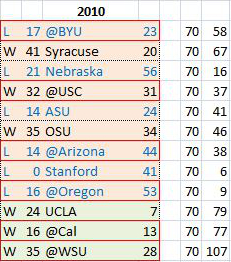 In Sark's 2nd season, the narrative starts to break down. While some were pretty upset they dropped their opener in Provo to BYU, the Cougars ended up ranked a better team, and at least by F+ measures, that's not a bad loss. The Huskies were surprisingly considered slight underdogs to Syracuse by F+, but they stomped them. However they also were crushed at home by Nebraska and Stanford, though both teams were rated much higher. The other win of significance at home was over Oregon State, and the margin of victory over UCLA was notable too despite the Huskies being slight favorites. On the road, Washington got a big upset win over USC, expected wins over Cal and WSU, and had big losses as heavy underdogs to Oregon and Arizona.

Overall, I'd put this season as a wash in terms of home vs. road performance. 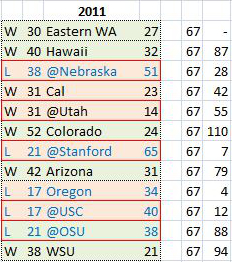 This is the year that some fans really started to cement the idea the Huskies played poorly on the road, but I'm not convinced it's warranted. The Huskies had closer than expected wins at home over Eastern Washington and Hawaii and expected margins of victory over Arizona, WSU and Colorado. They were stomped on the road by Stanford, Oregon & USC, but the difference in rankings would have predicted that. The loss to Nebraska was a little closer than F+ would have suggested, and while the loss to underdog Oregon State was a bad one, it's offset by a bigger margin of victory than expected as an underdog at Utah.

Again, I'm not seeing a real difference overall in home vs. road performance - a bad loss at Oregon State is offset by a good win at Utah, and while the Huskies didn't overachieve at Stanford, Oregon or USC, they underachieved at home vs. Eastern Washington and Hawaii. 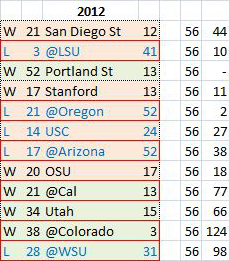 The real surprise from last year is that F+ thought San Diego State was the better team. Beyond that, the Huskies obviously had big wins at "home" vs. Stanford & Oregon State, and they beat Utah by a wider margin than their relative rankings would have suggested. Their win over Portland State was as expected, and while it was frustrating to lose the game to USC (they looked beatable), by F+ rankings it wasn't a bad loss. On the road, they were stomped by LSU and Oregon, though not by a surprising margin given their relative rankings. The loss at Arizona was more surprising, and of course the loss at WSU was a significant upset. The win at Cal at the time felt too close, though F+ thinks it wasn't quite that bad. The win at Colorado was as expected.

This is really the first year that - at least by F+ rankings - the Huskies were notably better at home than on the road. 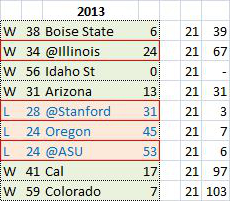 Of note, this is the first year under Sark (so far at least) where - by F+ measurements - the UW hasn't scored an upset. It's also by far the highest the Huskies have been ranked by F+. The home wins over Idaho State, Cal and Colorado seem to be appropriate blowouts, though you could make a case that the level of beatdown over Colorado exceeds the F+ disparity. The win over Boise State is still relatively impressive, as is the one over Arizona. The loss to Oregon is mildly disappointing. The road win over Illinois is perhaps a touch underwhelming, but the narrow loss at Stanford is impressive. The loss at ASU is disappointing, though it's worth noting F+ actually has ASU rated one spot higher than Oregon.

In all, this season so far tips slightly in favor of the Huskies playing better at home.

The first conclusion is it would be interesting to run this same analysis using another metric such as the Sagarin PREDICTOR measurement - I'll see about tackling this after the season ends.

The second conclusion is that, to the extent you put stock in the F+ metric, the Huskies have done well extracting wins under Sark when maybe they shouldn't have.

The third conclusion (and most germane to this article) is that the extent to which folks think the Huskies under Sark have performed notably worse on the road than at home seems overblown. There appears to be a slight advantage to how they do at home vs. the road overall, but that's mainly over the last 1.75 seasons (and there are still 2 road games left this season to change perceptions).