The Huskies are once again left out of the top 25 despite a smattering of objective assessments that suggest that UW may be the most under-ranked team in the nation.

Share All sharing options for: What the Ruff? Week 12 CFB Rankings Updates

Updated BCS rankings came out yesterday and they reflected a reshuffling of the deck chairs following a number of interesting Week 11 developments.  The big news for Pac 12 fans is the move of Stanford into the top four following their dominating performance over Oregon last Thursday.  The Cardinal are the highest ranked 1-loss team in the field and are ahead of a couple of undefeated teams, most notably Baylor.

For their part, the Ducks are still in the BCS conversation, but without any clear paths to the national championship game.  The Ducks come in 6th in the BCS and are still positioned to possibly play in a post-season BCS bowl game.  They'll likely need some help (e.g, a Stanford win over Notre Dame) to ensure a BCS bowl if they want to avoid a let-down like the Alamo Bowl.

The Huskies, despite a thoroughly dominating win over an under-manned Colorado team, are still outside of both the AP top 25 and the BCS rankings.  The Huskies, who did get 9 "other votes" in the AP and one in the Coaches Poll, are quickly becoming the most significantly under-ranked team in the nation.  Considering that the combined records of the three teams that UW has lost to includes a grand total of four losses and that two of those teams are in the BCS top 6, it seems that the Huskies are victims of timing of the losses (three in a row) and the wild score in the ASU game.

Outside of the BCS, the Huskies are, in fact, getting a lot of love.  The Sagarin rankings love Washington, showing the Huskies coming in as a top 10 team in the nation.  The Huskies benefit in Sagarin's methodology given the strength of their schedule, the statistical performance of their offense (to a greater degree) and their defense (to a lesser degree) and the fact that their losses are to other top 10 teams.  Although the Football Outsiders F/+ rankings for Week 12 are not out yet, I would expect the Huskies to also look very good in that methodology, as well.  All of this indicates that the national impression of the Huskies is somewhat inconsistent with the reality of the product that they are putting on the field, at least to date. 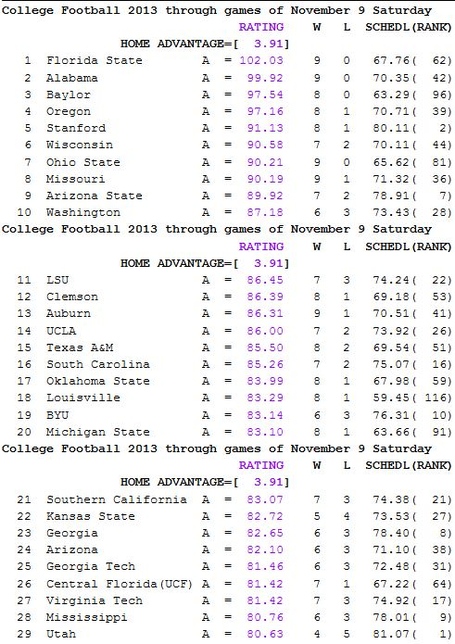 As for the rest of the Pac 12, I continue to be mystified that UCLA is ahead of ASU given that ASU has the better overall record, the more impressive strength of schedule, and domination in just about every statistical category that matters.  I guess the LA factor counts for more than we'd like to acknowledge.  It is also interesting to note that USC is now in the "others getting votes" category and is positioned to make a big jump back into the rankings if they can find a way to upset Stanford on Saturday.

The AP poll does not count in the BCS ranking system, but reflects the assessments of a much broader voter base.