The Stanford Cardinal basketball team has a Deonte Cooper-type story of their own. Unfortunately, Andy Brown has had his career forced to an end, however hard he has tried to fight the ACL tears.

The ACL is what keeps the lower leg from moving forward when the femur doesn't. Specifically, it limits the tibia's (shinbone) movement. It also limits the rotation of the knee. Knees aren't mean to spin in circles: it's a bad sign if your foot is pointed towards your boss standing over your shoulder as you read this.

Andy Brown first tore his left ACL in January 2009 while in high school. He still received a scholarship to Stanford, where he has already graduated with a degree in communications. He took a medical redshirt his freshman year to recover from another ACL tear in that same knee suffered on the first day of practice.

In August 2010, Brown tore his left ACL for a third time, but was determined to make it back on the court. He made it to the court for limited minutes during Stanford's run to the NIT Championship that season, and played a major role last season for the Cardinal.

In July, Brown tore the ACL in his right knee for the first time. It was then that Stanford Head Coach Johnny Dawkins announced that Brown was going to retire. He still retains his scholarship, and is working towards his Master's in Communication while still maintaining his involvement with the team.

Dawkins' situation with the team is not as stable. Should the team not make it to the NCAA Tournament and be in the hunt for a conference championship, he will be on the outs.

With that be said, he has the horses to make a run. 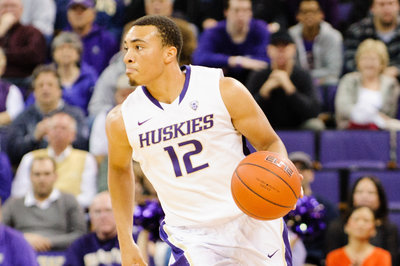 Ben looks at the Washington Huskies roster in this series, from newcomer Perris Blackwell to fifth-year senior C.J. Wilcox.

Stanford finished in the middle of the Pac with a 9-9 record inside the conference. They were able to make it out of their out-of-conference schedule relatively undamaged, with their four losses all coming to four RPI top-50 teams. Stanford nearly squeaked out a win, and would have gone to overtime against Minnesota, had Chasson Randle not fouled Andre Hollins shooting a deep three with one second remaining.

Stanford held their own in every game and were never truly blown out. They did lose in the first round of the Pac-12 Tournament to Arizona State in a barnburner, 89-88. Eventually, the Cardinal made it to the second round of the NIT Tournament where they fell to Alabama.

Who do they lose?

Andy Brown is the only major contributor who won't be returning for the 2013-14 season. He played a bit over 20 minutes per game last season, and was utilized as a stretch four, hitting jumpers from both mid-range and deep, while using his length inside on defense.

Almost everyone comes back. This Stanford team is very, very experienced.

Seniors Josh Huestis and Dwight Powell will man the middle. Huestis is very much a shooting forward. He took 77 threes last season. Where he was most valuable however, was preventing opponents from scoring. He used his long arms to grab nine rebounds per game, and average 2.1 blocks per game. He led the team in minutes last year, and it would be difficult to see him not playing around 33 minutes on a nightly basis.

Powell will be Huestis' mate in the frontcourt. Powell averaged 15 points per game last season and will be looked to for scoring. He is an inside-outside threat, shooting 45 percent from trey-land last year (on 33 attempts, so small sample size kicks in) while also being 12th in the conference in Free Throw Rate (metric that measures how many free throws attempted per field goal attempt, determining how good a player is at getting to the line). He then shoots 80 percent shooter from the stripe.

Junior Chasson Randle and sophomore Aaron Bright combine to make a two-point guard duo, similar to what Lorenzo Romar likes to do at times. We saw it with Abdul Gaddy and Andrew Andrews a lot last season. Bright is the more ‘pure' point guard of the two, and the numbers showed as much.

While both scored from the perimeter, Randle was the one relied upon more often to put the ball in the hoop. He is more of an undersized combo guard than a pure point guard, so the system works well for him. Randle is a gunner, not afraid to let loose from deep, taking the seventh-most threes in the conference last season with 170. Bright has the ability to shoot from deep, but isn't asked to do it as much (140 attempts still is a decent number though).

When it comes to running the offense, Bright is the more skilled point guard, as well as the more experienced point guard. He had more assists, as would be expected of the guy handling the ball the most.

John Gage and Rosco Allen provided depth in the frontcourt last season, and with Allen entering his sophomore year, he could end up making a leap to a bigger role beside Huestis and Powell. Neither were big scoring threats last season, and essentially were depth rebounding and defense bigs. Gage is returning for his final season.

I am putting Senior Anthony Brown in this category because he missed almost all of last season with a hip injury, and is almost like adding another player. Brown is a tweener between being a big guard and a small small forward. He is able to get rebounds at a good rate for a guard, is able to shoot from outside, and get to the free throw line at a decent rate. He is an all-around player for the Cardinal who could really use depth on the wing.

Someone who could provide a boost is Marcus Allen, an incoming freshman out of Centennial High School in Las Vegas. Allen is an athlete out on the wing with the ability to get into the lane and play in transition. He has a jumper that is still in progress, but can be streaky and get hot at times.

My pick for Stanford is that they will be on the Tournament Bubble come Big Dance time. If they are healthy for most of the season, they get in. If they don't stay healthy, they will have a difficult time making it into the field of 68.