John Wooden Is arguably the greatest coach in the history of sports. He did his damage before my time, but his résumé speaks for itself. Seriously, even if you know, look it up.

This quote from Mike Krzyewski sums it up pretty well.

"What Coach Wooden did will never be touched," Krzyzewski has often said. "And the number of games you win in the tournament isn't as important as the number you can lose -- none. One bad shooting night or one good shooting night by the other team and you're gone. One bad call can knock you out, or a key injury at the wrong time. That's the beauty of the college game and of the tournament. But it's also the reason why none of us has ever come close to what he did and none of us ever will.

The late Wooden is no longer the head coach at UCLA, and neither is Ben Howland. The new head coach in Los Angeles is Steve Alford. Alford was a very good player, earning All Big-Ten honors three times and winning a National Championship on the way to becoming the all-time leading scorer at Indiana.

His last stop was New Mexico. In 2010 Lorenzo Romar led the Huskies past Alford's 3-seed Lobos, also the last time that Washington made the Sweet 16.

Alford claims to run an up-tempo offense. As noted in my USC preview, Andy Enfield doesn't believe that. The numbers show that Alford runs a below-average paced team. Up until just last season, Howland had been known to have his teams play at a plodding pace- his teams averaged being ranked 206th nationally. Last season, Alford's Lobo's ranked exactly 200th.

The numbers (though skewed from playing in the mid-major Mountain West) show that New Mexico was a team that consistently had above-average offense to go along with suffocating defense. The team he is inheriting was above-average both offensively and defensively. Neither were outstanding, but both were above-average, allowing for the Bruins to be above-average. 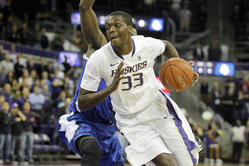 Ben takes a look at the roster that Lorenzo Romar will be working with for the 2013-14 season, from point guards to centers.

Ben Howland got fired (this is a trend) is what happened. While there is speculation that Howland was fired for money, not performance (three Final Fours, also won the Pac-12 regular season crown in 2012-13).

UCLA fired Ben Howland despite the fact that he won the Pac-12 regular season championship. That is a high standard for Alford to follow.

Last season, led by NBA first-round draft pick Shabazz Muhammad, UCLA went 25-10 overall, and 13-5 against Pac-12 competition. It earned them a spot in the NCAA Tournament, where they were knocked out in their first game by Minnesota.

The obvious one is Muhammad. Muhammad was considered a probable one-and-done player coming out of high school, and that is what he was. His scoring will be the most difficult thing to duplicate. He averaged over 18 points per game, doing it using a variety of methods. He shot 38 percent from behind the arc, a decent mark that put him in the top 30 among the Pac-12.

Larry Drew II is the only other impact player who left after last season. Drew graduated after spending five season as a collegiate basketball player, three years at North Carolina and after sitting out a year per NCAA transfer rules, one season as a Bruin.

Drew ran point for the Bruins, and did a remarkable job not turning the ball over despite handing it more than most any other player. I don't want to watch it, but Drew did hit a game-winner over UW as time expired in their first meeting last season.

Kyle Anderson was part of the stellar 2012 recruiting class that Howland dragged in. As a freshman last year, the versatile 6-9 guard averaged a shade under 10 points per game, along with 8.6 rebounds per game and was also the second-best assist man on the roster to Drew. Returning for his sophomore season, Anderson is a "non-athlete" who gets by on basketball IQ and his length. His nickname is "slo-mo."

It has been speculated that Anderson will be playing a point forward role (at 6-9, who's a guard?) this season. The only true point guard on the roster is freshman Bryce Alford, son of the head coach. Alford the son had no D-1 offers other than from UCLA.

Norman Powell received substantial playing time. Powell is known as an athlete. He had a posterization last season that showed off his impressive leaping ability. He is someone that I believe will see a larger role in the offense with the absence of Muhammad. Although Muhammad is the better shooter, both of them fit the bill as high-flying slashers.

Jordan Adams was the third of four major recruits that made UCLA's 2012 class one of the best in the country. Adams did not disappoint. He was second to Muhammad at over 15 points per game. He attempted the fifth-most free throws of anyone in the Pac-12. He shot 84 percent from the line. This guy can light up the scoreboard.

Adams has broken his foot twice in his career, one time coming in the Pac-12 tournament last season. Time will tell if this is a recurring injury (like C.J. Wilcox and stress fractures) and is something to keep an eye on.

The Wear twins seemed to be the downfall of Washington when the two teams clashed. David Wear is the inferior of the two, however mean that sounds to say. Travis Wear is still not too great of an athlete, but the both of them have the size to make a major impact in the coming season, whether it be rebounding, scoring, or passing in the high post, as they did admirable against Washington last season.

Although he did not do much last year, watch out for center Tony Parker. He was a highly touted recruit for a reason. It seems that he has gotten himself into shaper and is ready to be a major contributor as a sophomore. Time will tell if he only needed to get is feet a little splashed onto them, or if all the scouting services were wrong. I would probably go with him being out of shape as one of the biggest issues.

Out of Washingon's own backyard, Bothell, Zach Lavine had little interest in attending UW (or the other way around, I don't really know), and decided to go to UCLA. Lavine is a 6-4 2-guard with the ability to run the offense in a pinch. He can shoot. One problem he can run into is that he is slight of frame, which may cause him some trouble defending and driving past stronger players.

Now for someone that UW targeted, for sure. Maybe the push wasn't as strong by Coach Romar compared to Arizona's Aaron Gordon, but there was definite interest. Hamilton was a McDonald's All-American in high school with the ability to be special right off of the bat.

He is just a born scorer, plain and simple. He has a good, if streaky, jumper. He uses his length to get to the rim. When he is on his way, he can do anything. He has the ability to pull up from mid-range. He has the ability to find open teammates (one of the best 2-guards of his class at that.) He can finish while being contested.

So, what do you think of this UCLA squad? Do you think they have a shot at toppling Arizona? Will they make it to the NCAA Tournament again?