Share All sharing options for: Steve Sarkisian, ASJ and a Packaged Play

One of my favorite plays the Huskies ran a week ago was a quick hitter to Austin Seferian-Jenkins. He lined up at his usual tight end, and almost immediately shifted out wide.

This is a great way to start a play. When you have a transcendent player like ASJ, you have to find creative ways to get him the ball. If you're just having him line up next to tackle and run routes and block you're wasting his potential. By moving him out to wide receiver you create a matchup problem. As a defense, do you put a much smaller corner on him and risk having your player run over on a short route or out-muscled on something deep? Do you send a backer out there, knowing that there's no chance that he has the coverage skills to stay with Seferian-Jenkins? Or do you walk your safety over to cover him, leaving yourself vulnerable to deep attacks from the other receivers?

San Diego State's solution was to do none of these things and just leave 88 undefended, which I guess is a strategy. Nick Holt approves. 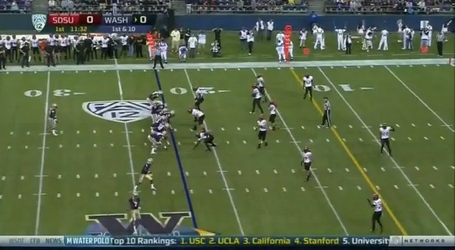 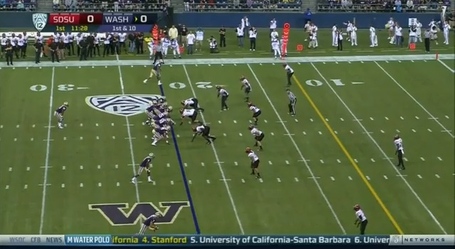 No defender goes out with ASJ, so Keith Price hits him immediately, and the Huskies take an easy gain of 7 or 8 yards. Simple right? Wrong. We're only at the entrance of this wormhole.

The interesting thing about this play is not ASJ: it's everybody else. Except for ASJ and Price, every other Husky player is executing a run play. The line fires out and blocks zone right, Bishop Sankey is following them, while Jaydon Mickens and Cody Bruns have no interest in running routes. Mickens is far more concerned about the man he is (probably) supposed to block, to the point that he misses the snap of the ball. 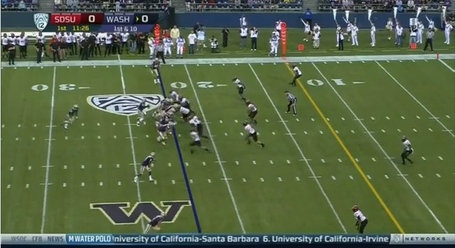 Notice, the man that was over Mickens moved in to blitz, and Mickens pointed at him (it's hard to see, I know, but if you can't tell just take my word for it). He was so focused on that defender that while everyone else had already started moving, Mickens hasn't. Now, if this were a pass play Mickens would be salivating because there's no defender near him. He's wide open pretty much regardless of the route he runs, and would be anxious for the snap.

What we're looking at is a packaged play, essentially an option of the outside linebacker over ASJ. If the defender follows him on the motion then the Huskies run the zone and take advantage of fewer defenders in the box, the wider running lanes, and a possible huge cutback to where that linebacker would have vacated. If nobody steps up and covers ASJ, then they run the play we saw.

This is the evolution of modern football: plays where whatever the defense does they're wrong. If Steve Sarkisian left plays in the bag for LSU (and I believe he did), these types of plays that either get the ball into the hands of playmakers like ASJ and Kasen Willliams or open up things for the other guys are what I want to see.