Kicking Off "We <3 Oregon Week"

Share All sharing options for: Kicking Off "We <3 Oregon Week"

My original intent was to post something with a little snark, a little cheek and a little bit of analysis with the goal of kicking off a rivalry week on the right foot. In prepping for this post, I decided to head over to ATQ to see how Duck fans were responding to the WSU game and I stumbled upon their thread for the UW-Stanford game.

I'm not talking about hate in a sports rival hate kind of way. This is bigger than that. This is past Vikings-Bears. It is past Lakers-Celtics. It s beyond Yankees-Red Sox. This is "beat-that-Giants-fan-into-a-coma-because-he's-wearing-orange" type of hatred. This is visceral and mean-spirited. It is simply not fun any more.

I imagine many of you are reading this thinking that nothing has changed. It is the same old Oregon/UW intense rivalry. Sure, there are crazies on both sides and, especially behind the veil of anonymity enabled by the Internet, nasty things get spouted.

But, it's not just that any longer. I spent most of my youth in Portland. I've been to Autzen dozens of times over the years. I've tailgated and hung out in local watering holes sporting purple and gold many a time. Of course, I encountered plenty of jeering, but I also got tons of handshakes, shared tailgate spreads and talked some good football with locals and friends of mine who traveled the wrong direction to go to college. I know what the Oregon - UW rivalry once was and I know what it is now. In all those years, I never encountered banter like the comments taken right off the ATQ Stanford/Husky Game Thread. See for yourself: 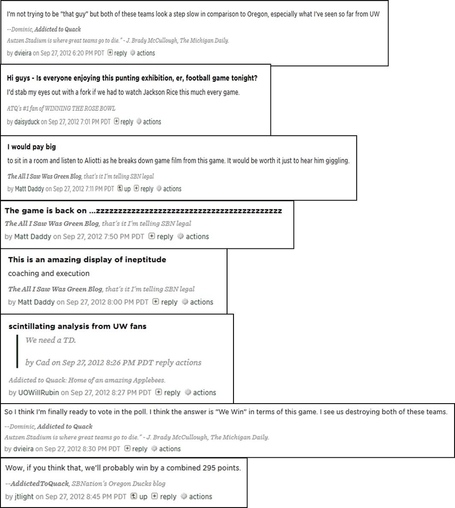 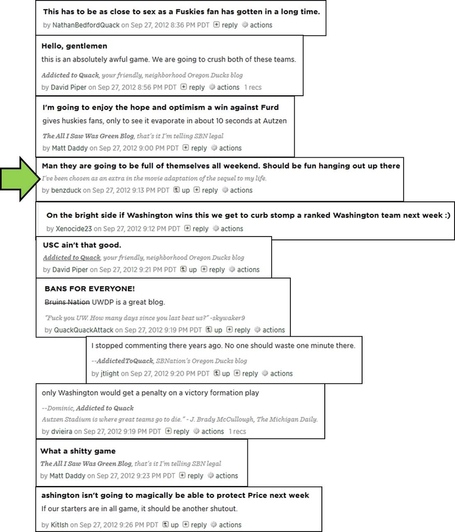 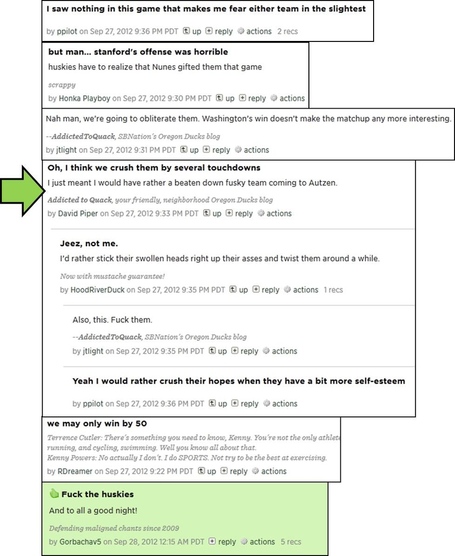 Read these comments. Do you sense the deep-rooted loathing? Do you see the blatant hatred? The irony, of course, is that the reason most Duck fans will tell you that they hate the Huskies is because of our arrogance. Again, read these comments. "I don't want to be that guy, but we're faster", "I saw nothing in this game that makes me fear either team", "USC ain't that great", "we will crush them by several touchdowns", "we may only win by 50", and so on. Arrogance? Really?

Duck fans have become what they hate the most about us, and they don't see it in the least.

But they've gone beyond just the arrogance (frankly, they've earned the right to a healthy dose of swagger). What disturbs is that they have sunk to a level of ill-will that I can't really fathom. There is nothing light-spirited in what they do or what they say. They hate in a way that no other sports fan base hates. In our most successful days, we never hated like these people hate. We never laced our inter-fanbase vernacular with phrases like "I'd rather stick their swollen heads up their asses and twist them around awhile" or "Fuck the Huskies and to all a good night" (ironically, a comment made by a man with a special needs child whose call to action some of us on the purple side have rallied to support with cash donations).

I know Duck fans will read this and say that this is a two-way dynamic. But it really is not. The truth is that, outside a few nutjobs on the outskirts of the mainstream, we don't talk like this in person. We don't even hide behind the Internet and write these kinds of things. Nothing - scan our threads, posts and fanshots. We just don't. And, you know what, neither do other fanbases. I looked around and tried to find similar blathering. Outside of some Auburn fans hating on Alabama, I can't find anything else quite like this out there. WSU fans don't do it versus UW. Oregon State fans don't do it versus Oregon. UCLA fans don't do it (too much) versus USC. Utah fans don't do it versus BYU. Just like their offense, the Ducks have taken rival hating to a whole new level.

It's sad and frustrating. I like a robust fan debate. Whether it be the serious point-counterpoint on schemes/talent/predictions or the light-hearted barbs and exchanging dilapidated joke lists (A Priest, a Rabbi and a Duck Fan walk into a bar ...). But, we are past that.

And, this is a shame. Those of you that read my Gekko File on Oregon this past summer know how I feel about them. I predicted that they'd go undefeated in the regular season. I noted how impressed I was with what I saw in Marcus Mariota in the spring game and predicted that he'd win the starting QB job. I mentioned what great young men Michael Clay and Dion Jordan seemed to be in interviews. And I told you how much I really like Kenjon Barner as a football player and a person (although I hate Country-Western, I just love the fact that he goes against the grain and loves it, himself). I wrote about how I respect the way that Chip Kelly has innovated at the practice field level and how I thought the national media was overrating USC at the expense of Oregon.

These were honest and real comments made with respect and admiration for a rival - a "hated" rival - that has risen to the very top of the college football world. Unfortunately, there is no underlying respect returned - and I'm not talking about respect for our football team, I'm talking about general respect for another human being. Without such basic consideration, there is no basis upon which to build a civil discussion. To the extent that ATQ represents the "main stream" of Duck fandom - which they absolutely claim - there is no middle ground to partake in a respectful, jocular exchange of debate and banter. All there is viciousness and acrimony.

I'm sure I'll get mocked over there for this article. Their braintrust has not hidden their disdain for Husky Fans or for the UW Dawg Pound (e.g. jtlight: "no one should waste one minute over there"). Duck fans are nothing if not predictable. They will lash out with the typical blog thread rhetoric that has become their calling card. They'll retread all of the tired insults that they always whip out - and it will be some combination of "overly sensitive", "conceited", "old" and "slow". It doesn't really matter to me. The truth is that all of this nonsense has become too belligerent for my tastes. The one-way hate fest is neither interesting nor amusing and I refuse to participate.

So, welcome to "We <3 Oregon Week". I recognize that UW fans certainly took the first step which led down the road that explains why Oregon Duck Fans hate us and, with this gesture, I'm going to take the first step to correct it. I'm going to continue to be deferential to Oregon the football team, encouraging to my football team and open to any Duck who wishes to cross the ATQ picket line and join us for a civil discussion over here at the UW Dawg Pound. Those of you who wish to continue to monger hate and disdain (and I don't care if you are Duck or Dawg), just know that your schtick is mawkish, cliched and no longer welcome over here. Take it back to the ATQ or anywhere else where dimwits and bucolics gather. I'm done with it.